BAZARAK, Afghanistan -- Hamid Karzai, Afghanistan's interim prime minister-designate, on Friday visited the grave and the family of Afghanistan's most powerful dead man, Ahmed Shah Massood, in the tiny village of Bazarak along the white rapids of the Panjshir River.

"This visit was politically important," said Abdul Sabur, 38, a northern alliance radio operator. "We appreciated his condolences to our leader."

Afghanistan is a nation where the dead can be more important than the living and where gestures are louder than words.

Massood's ghost hangs over the future administration of Afghanistan, and no one realizes this more than Karzai. If he, a Pashtun from the south, is to bring peace and cohesion to this ethnic tinderbox of a nation, he needs the continuous support of the northern groups, the Tajiks and the Uzbeks, who mainly make up the alliance.

To them, Massood is larger than life. His picture adorns virtually every door, electricity pole and windshield in Kabul, the capital. He will be forever remembered as a martyr for his country. In predominantly Tajik Bazarak, where Massood was born, people still speak of him in the present tense.

Within the new interim administration that will take power Dec. 22, three key ministries -- foreign, defense and interior -- are headed by Massood's young proteges, so Karzai will be dependent on their support.

Karzai spent about 20 minutes at the grave, reading passages from the Koran, bowing his head and gesturing toward the sky. He then visited with Tajudin and other members of Massood's family.

Karzai arrived in Kabul late Wednesday night and immediately began holding planning meetings with key Afghan leaders, Western diplomats and some members of his temporary government, most of whom he didn't know.

He did, however, know Massood. Two months before the goateed commander was killed, he had met with Karzai in the northern town of Khoja Bahauddin, Tajudin said. The two leaders had known each other from the days when they were mujahedeen, the U.S.-backed freedom fighters who drove the Soviets out of Afghanistan in 1989.

Karzai and Massood discussed ways of raising support for their cause outside the country as well as forming a new government once the puritanical Taliban had been ousted. They kept in close contact, Tajudin said, adding that the last time they spoke was two days before Massood was assassinated.

"Karzai was his close friend," he said. "They were working together."

Nevertheless, it was difficult at first for some Massood supporters to swallow having anyone else but their leader as head of the next government.

"When I first heard about Karzai, I was a bit worried," said Hismatullah Sadiqy, 24, who guards Massood's grave overlooking majestic snow-capped mountains. "He can't be like Ahmed Shah Massood. Massood was chosen by the local people. Karzai was chosen by the Bonn meeting."

Sadiqy was referring to the U.N.-sponsored conference in Germany last month at which Afghan factions signed a historic power-sharing deal that paved the way for the six-month interim government.

But Sadiqy felt differently when he saw Karzai and senior northern alliance officials such as Mohammed Fahim, the new defense minister, paying homage at Massood's grave, topped with wreaths of colorful plastic flowers and condolence letters.

Others in Bazarak said they supported Karzai because of the lessons they learned from Massood about tolerating other ethnic groups.

"There is no difference between Tajik, Pashtun, Hazara or Uzbek. This is Massood's sentence," Tajudin said. "We're following his way. If Karzai serves Afghans properly, we'll support him and respect him like we do Massood. But of course, no one can be like Massood."

Most villagers support Karzai simply because they are tired of 23 years of war, which has destroyed the country. The narrow, rutted mountain pass leading to Bazarak is littered with decaying Soviet tanks. Rusting tank treads serve as speed bumps, and the carcasses of other military vehicles are used to build walls.

"Karzai has a nice background. He was a mujahedeen," said Gul Ahmed, 53, who helps distribute food for the Red Crescent, a relief agency. "We hope he will help us. The Afghans are poor people. The majority is uneducated. I just hope now we'll have peace and that the fighting will stop.

"That is what Massood wanted."

TOPICS: Front Page News; News/Current Events
KEYWORDS:
1 posted on 12/14/2001 9:22:53 PM PST by HAL9000
[ Post Reply | Private Reply | View Replies]
To: HAL9000
Seems like a classy guy. Amazing. Hope he does all the right things. Sounds like the people, including the militias, are just sick of war. Notably the Bonn Conference avoided parcelling positions to the older warlord clan. 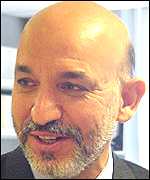 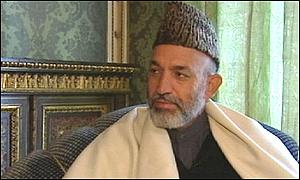 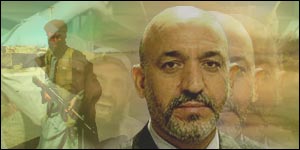