When Jesus was baptized by St. John the Baptist, it wasn’t just any body of water, or puddle, but the Jordan river. This is significant, as this spot wasn’t random, but has profound biblical symbolism.

When the people of Israel were led to the “Promised Land,” they had one final hurdle to overcome: the Jordan river.

The entire nation had to cross the Jordan river in order to claim the land that God had marked out for them. This action is narrated in the book of Joshua.

The people then followed Joshua across the Jordan river and were saved from their enemies and inherited the Promised Land.

Jesus is the New Joshua

Jesus’ name in Hebrew is Yeshua, which is a form of the name “Joshua.” Jesus then becomes the “New Joshua,” leading the People of God across the New Jordan, through the waters of baptism.

The Catechism of the Catholic Church makes this connection explicit.

Baptism is prefigured in the crossing of the Jordan River by which the People of God received the gift of the land promised to Abraham’s descendants, an image of eternal life. The promise of this blessed inheritance is fulfilled in the New Covenant.

CCC 1222 Jesus’ baptism reminds us that everything is important in the Bible, even the most minute details of a location. It all points to deeper spiritual mysteries that are active in our own lives today. 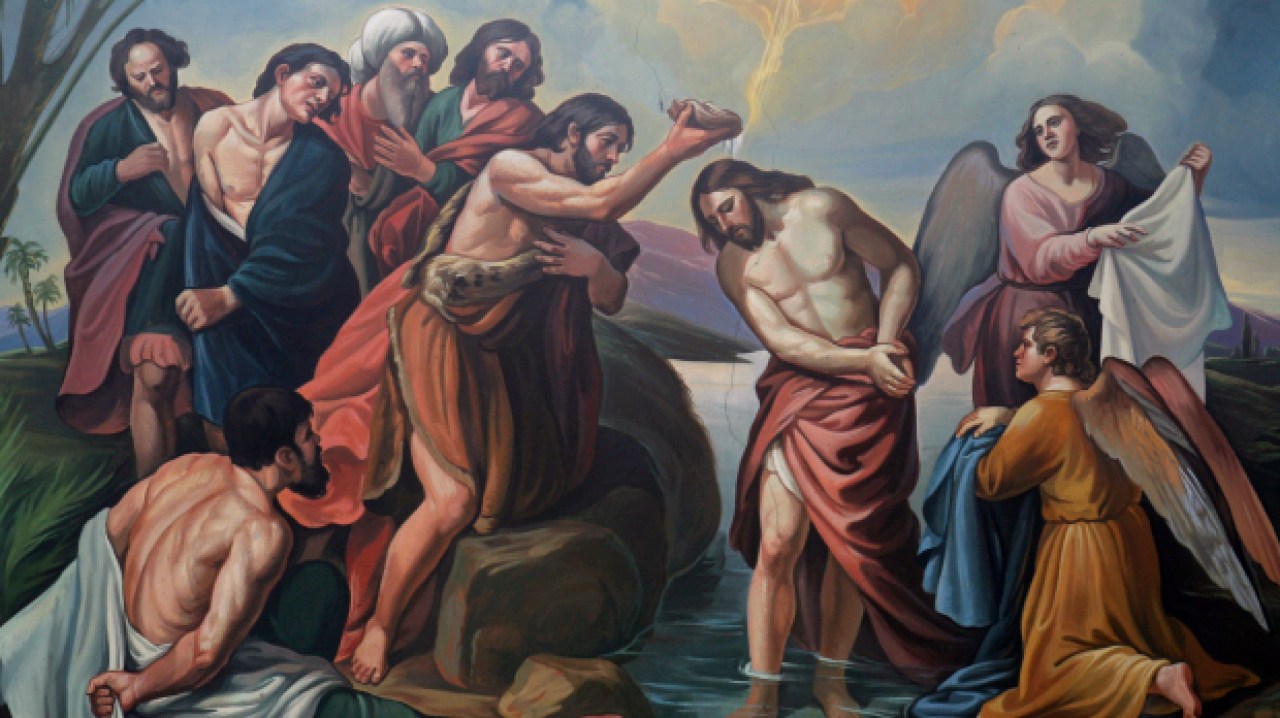 16 That the waters which came down from above stood and rose up upon an heap very far from the city Adam, that is beside Zaretan: and those that came down toward the sea of the plain, even the salt sea, failed, and were cut off: and the people passed over right against Jericho.

17 And the priests that bare the ark of the covenant of the Lord stood firm on dry ground in the midst of Jordan, and all the Israelites passed over on dry ground, until all the people were passed clean over Jordan.

1 Now Naaman, commander of the army of the king of Aram, was a great man [a]in the view of his master, and eminent, because by him the LORD had given victory to Aram. The man was also a valiant warrior, but afflicted with leprosy.

2 Now the Arameans had gone out in bands and had taken captive a little girl from the land of Israel; and she [b]waited on Naaman’s wife.

3 And she said to her mistress, “If only my master were [c]with the prophet who is in Samaria! Then he would cure him of his leprosy.”

4 And [d]Naaman went in and told his master, saying, “The girl who is from the land of Israel spoke such and such.”

5 Then the king of Aram said, “Go [e]now, and I will send a letter to the king of Israel.” So he departed and took with him ten [f]talents of silver, six thousand [g]shekels of gold, and ten changes of clothes.

6 And he brought the letter to the king of Israel, [h]which said, “And now as this letter comes to you, behold, I have sent Naaman my servant to you, so that you may cure him of his leprosy.”

7 But when the king of Israel read the letter, he tore his clothes and said, “Am I God, to kill and to keep alive, that this man is sending word to me to cure a man of his leprosy? But consider now, and see how he is seeking [i]a quarrel against me.”

8 Now it happened, when Elisha the man of God heard that the king of Israel had torn his clothes, that he sent word to the king, saying, “Why did you tear your clothes? Just have him come to me, and he shall learn that there is a prophet in Israel.”

9 So Naaman came with his horses and his chariots, and stood at the doorway of Elisha’s house.

10 And Elisha sent a messenger to him, saying, “Go and wash in the Jordan seven times, and your flesh will be restored to you and you will be clean.” 1

11 But Naaman was furious and went away, and he said, “Behold, I [j]thought, ‘He will certainly come out to me, and stand and call on the name of the LORD his God, and wave his hand over the site and cure the [k]leprosy.’

12 Are [l]Abanah and Pharpar, the rivers of Damascus, not better than all the waters of Israel? Could I not wash in them and be clean?” So he turned and went away in a rage.

13 Then his servants approached and spoke to him, [m]saying, “My father, had the prophet told you to do some great thing, would you not have done it? How much more then, when he says to you, ‘Wash, and be clean’?”

14 So he went down and dipped himself in the Jordan seven times, in accordance with the word of the man of God; and his flesh was restored like the flesh of a little child, and he was clean.