Complaint: Policy of cover-up a violation of international law

NEWARK, N.J. (ChurchMilitant.com) - The Holy See is being slapped with a lawsuit over sex abuse cover-up. 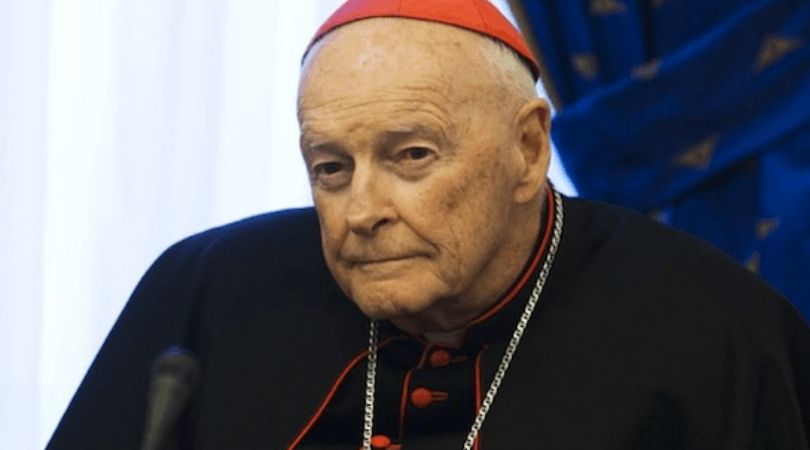 One of the victims is a priest, but his identity is hidden in this case to shield him from repercussions from his bishop and the Vatican.

In his address, Anderson, who specializes in prosecuting clerical sex abuse cases, detailed the specifics of the lawsuit. He laid blame for McCarrick's decades of predation on minors and young men at the feet of three pontiffs: John Paul II, Benedict XVI and Francis.

"Why is the Vatican named? Because the problems and the source of them — which includes secrecy and hiding of the truth and hiding of the offenders and the perils that exist nationwide and across the globe — all come from Rome," Anderson explained.

"All roads lead there," he continued. "All trails that we have been working to uncover and excavate for almost four decades lead there. Every case that survivors have brought by us and others standing up for the truth and to protect kids ultimately leads to practices and protocols and policies implemented by the Holy See."

In the suit, Anderson explained, "no less than 33 cardinals are named and identified as either condoning or complicit in the pattern of sexual abuse by McCarrick. ... Three popes, 33 cardinals, countless bishops — literally hundreds of bishops — thus implicated in this lawsuit."

Secret settlement agreements with victims have been used to silence the victims and their families and to protect the abuser from criminal prosecution.Tweet

The lawsuit accuses the Vatican of perpetuating sex abuse through cover-up:

Secret settlement agreements with victims have been used to silence the victims and their families and to protect the abuser from criminal prosecution by United States and state authorities. This practice was designed to shield defendant Holy See from "scandal," and has been mandated not only in the United States but throughout the world, including North and South America, Europe and Australia. Defendant Holy See is responsible for the historically verified practice of the hierarchy, including the bishops, moving sexually abusive priests to areas where allegations of the offender's abusive conduct were not known. Defendant Holy See has never taken appropriate or effective steps to remove sexually abusive priests from the ministry ... .

While the "public" policy of Defendant Holy See is to forbid child sexual abuse by priests and clerics within its control, the actual "private" or secret policy is to harbor and protect its abusive priests, clerics, bishops, archbishops, cardinals, agents and employees from public disclosure and prosecution in order to maintain the supreme pontiff's rightful claim of control and thereby ensure that its parishioners, followers and financial contributors will keep confidence in the institution, continue to view defendant Holy See and the supreme pontiff as deserving of allegiance and, therefore, continue to contribute money and property to defendant Holy See.

The suit also accuses the Vatican of violating international law. It notes that in 1990, the Holy See ratified the Convention on the Rights of the Child (CRC) — a United Nations treaty laying out civil, political and social rights for children — and is therefore legally bound by the terms of the accord.

"In January 2014, defendant Holy See was called to respond to questions about its record in protecting children from sexual violence," it explains. The following month, the CRC released a report condemning the Vatican's failure to protect minors from "sexual abuse committed by members of the Catholic churches ... with clerics having been involved in the sexual abuse of tens of thousands of children worldwide."

"The United Nations has expressed ... concerns with defendant Holy See's compliance with the CRC," the suit notes, accusing the Vatican of consistently placing "the preservation and reputation of the Church and the protection of perpetrators above the best interest of children."

These concerns include the fact that the Vatican's internal law has "allowed the vast majority of abusers and almost all those who concealed child sexual abuse to escape judicial proceedings in states where the abuses were committed," and "imposes a code of silence on all members of the clergy," which has both "prevented child sexual abuse from being reported to law enforcement authorities" and "caused those members who have reported to be ostracized, demoted or fired, while priests who have refused to denounce child abusers have been congratulated and promoted within the Catholic Church."

Anderson closed Thursday's press conference with a direct appeal to Pope Francis, "Engage with us ... to open up the iron gates of secrecy protecting offenders!"

God will not be pleased with the church using the faithful’s money in this manner. There will be consequences.

Cardinal O’Connor reported his suspicion and told JP2 not to give him the red hat. m Carrick lied and told him it was not the truth. B16 silenced him, but he ignored it. Francis ignored B16 and sent him to China where he betrayed the Catholics and made a deal with the Communists.

The Poope is an AntiChrist.

Knowing this in advance, Uncle Teddy contacted JP II to insist he was absolutely innocent of all homo charges. As a result JP II ignored O’Connor’s warning and went ahead and placed McCarrick in D.C. Later giving the same a red hat.

What Neumayr notes is that if the Vatican knew and now reports that McCarrick wsa tipped-off, why does it not report who tipped McCarrick off? Neumayr suspects it was Cardinal Sodano.

Neumayr also points out the two most mentioned names in the report were McCarrick and Vigano, yet neither was contacted in the “investigation”.