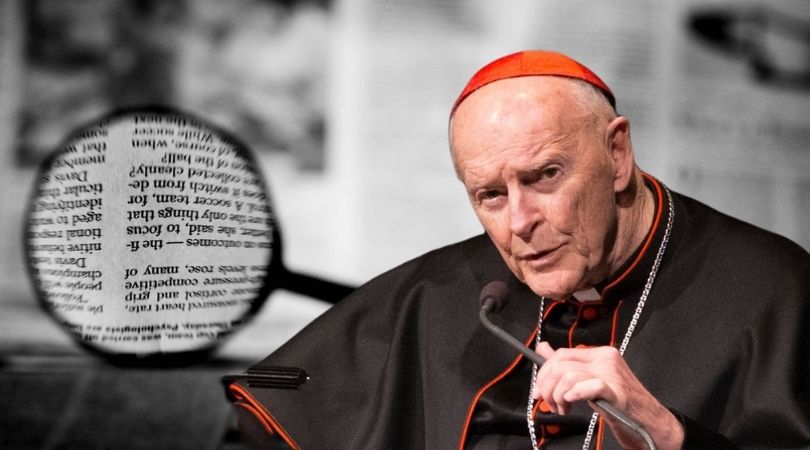 VATICAN CITY (ChurchMilitant.com) - The McCarrick report is portraying Pope Francis as the hero who immediately dismissed the homopredator prelate on receiving credible complaints while painting whistleblower Abp. Carlo Maria Viganò as the villain, whose reports of complaints to the pope regarding Theodore McCarrick are disputed. 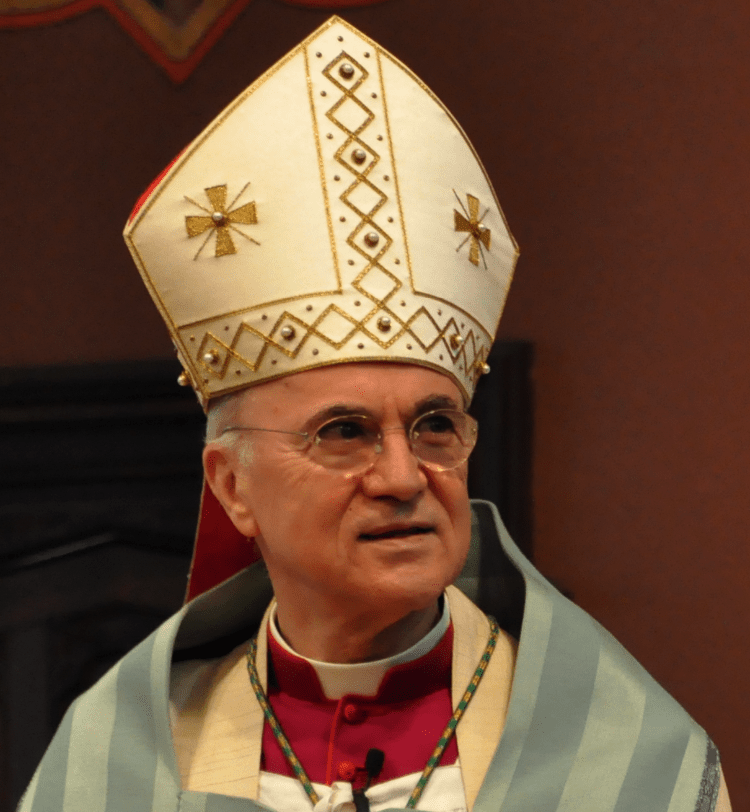 Viganò slams the McCarrick report for trying to discredit him

The long-awaited 450-page document, which fails to mention the name of earliest named victim James Grein, was published by the Vatican Secretariat of State Tuesday afternoon, two hours after the release of a U.K. quasi-governmental report on child sex abuse slamming Pope Francis.

The Vatican's dossier, titled "Report on the Holy See's Institutional Knowledge and Decision-Making Related to former Cardinal Theodore Edgar McCarrick (1930–2017)," recounts incidents of sexual abuse which, it warns, "could prove traumatizing and should be approached with caution."

Exonerating the pontiff of culpability for the McCarrick scandal, the report describes how Francis "reacted promptly" as soon as he received the first report of abuse from a victim — stripping the accused cardinal of his red hat and then laicizing him.

The document emphasizes it was Pope Francis who ordered "decision-making regarding McCarrick be thoroughly investigated and that the results of the investigation be published" as "an act of pastoral care by the pope for the American Catholic community that was wounded and anguished that McCarrick had been appointed and promoted to high office in the Church."

The two-year investigation was carried amidst "considerable tension culminating in the denunciation by the former apostolic nuncio in Washington, Carlo Maria Viganò, who, in an international media campaign, publicly called for the resignation of the current pontiff," the report notes.

According to the report, "Viganò first claimed in 2018 that he mentioned McCarrick in meetings with the Holy Father in June and October 2013, but no records support Viganò's account, and evidence as to what he said is sharply disputed."

The pain of the victims and their families is also our pain.Tweet

The report categorically rejects Viganò's claim that he told Francis during their June 23, 2013 meeting that McCarrick had committed "crimes" and that he was a "serial predator."

Francis did not recollect what Viganò said about McCarrick during these two meetings, but because he knew the cardinal personally the pontiff "was certain that he would have remembered had Viganò spoken about McCarrick with any 'force or clarity,'" the report stresses.

It also asserts that before the allegation made to the New York archdiocese in 2017, "the pope was never informed by anyone that McCarrick had sexually abused or assaulted any person, irrespective of age."

But the report is silent on James Grein, who alleges that McCarrick repeatedly abused him in the 1980s.


Only once, in a single footnote, does the report mention Fr. Robert Ciolek who received an $80,000 settlement in 2005, partly over allegations that McCarrick, as a New Jersey bishop in the 1980s, had sexually abused him.

Until 2017, no one — including Cardinal Parolin, Cardinal Ouellet, Archbishop Becciu or Archbishop Viganò — provided Pope Francis with any documentation regarding allegations against McCarrick, including the anonymous letters dating back to the early 1990s or documents related to Priest 1 or Priest 3. Pope Francis had heard only that there had been allegations and rumors related to immoral conduct with adults occurring prior to McCarrick's appointment to Washington.

Believing that the allegations had already been reviewed and rejected by Pope John Paul II, and well aware that McCarrick was active during the papacy of Benedict XVI, Pope Francis did not see the need to alter the approach that had been adopted in prior years.

The report insists that there is no record of Viganò's written communications in the Holy See files before, between or after the June and October 2013 meetings and no summary or memorandum of the one-on-one meetings between Pope Francis and Viganò.

But, while he raised the alarm, he too understood that there were no proven facts.Tweet

However, it concedes that in 2006 and 2008 Viganò in his capacity as delegate for Papal Representatives, had reported accusations of sexual aberrations by McCarrick — "highlighting its seriousness."

"But, while he raised the alarm, he too understood that there were no proven facts," the report observes.

Rather, despite receiving a new accusation against McCarrick in 2012, the report says Viganò, as apostolic nuncio to the United States, did not carry out all the investigations against the homopredator and "did not take significant steps to limit McCarrick's activity, or his national and international travels." 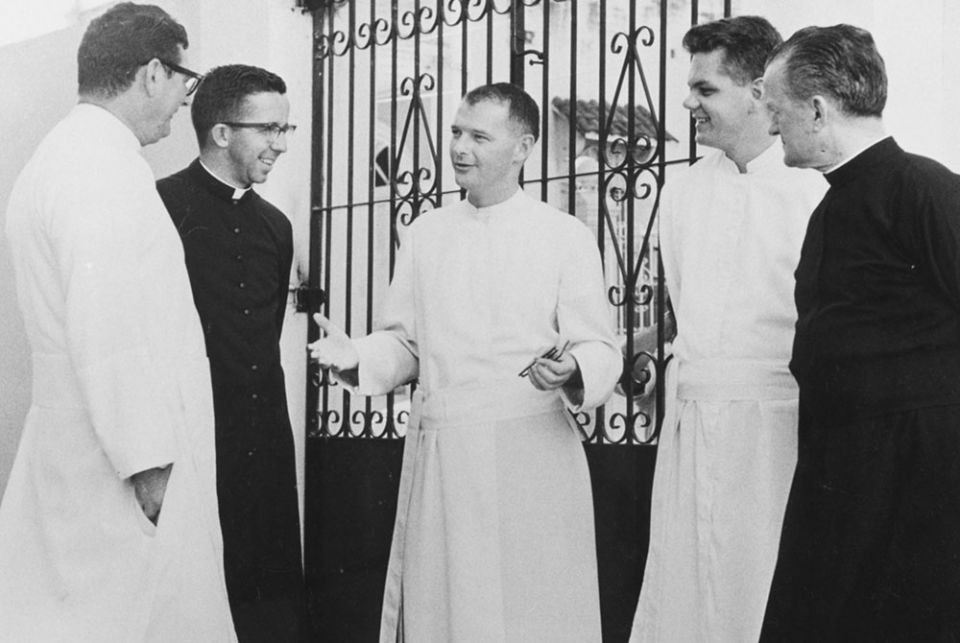 McCarrick in 1966 with staff of the Inter-American Center

In a statement to Church Militant, Abp. Viganò blasted the report for "the surreal operation of mystification regarding who are the ones responsible for covering up the scandals of the deposed American cardinal."

"I cannot help expressing my indignation in seeing the same accusations of cover-up being made against me, when in fact I repeatedly denounced the inaction of the Holy See in the face of the gravity of the accusations concerning McCarrick's conduct," Viganò remarked.

Pointing out the suspicious timing of the report and the obvious attempt to discredit him, the whistleblower said he did "not have any reason to fear that the truth will contradict my denunciations, nor am I in any way blackmailable."

The report highlights Pope John Paul II's role in appointing McCarrick as archbishop of Washington, D.C. in 2000 and as a cardinal in 2001, even though there were accusations against the cleric which "could resurface and cause embarrassment and scandal."

But McCarrick himself, learning of these allegations, wrote to Pope John Paul II's secretary Bp. Stanisław Dziwisz, swearing that he had "never had sexual relations with any person, male or female, young or old, cleric or lay."

The Polish pope read the letter and felt McCarrick was telling the truth. The report describes the context in Poland during John Paul's time as archbishop, when he had witnessed the communist regime falsely accusing priests and bishops with a view to discrediting them.

I cannot help expressing my indignation in seeing the same accusations of cover-up being made against me.Tweet

It was Pope Benedict XVI who "rapidly asked for the resignation of the American cardinal to whom he had recently granted a two-year extension of his mandate" when, in 2005, sexual abuse accusations began to surface once again.

However, because there were no accusations of the abuse of minors and since McCarrick had already retired, Benedict did not open a formal canonical investigation.

Further, the Vatican did not impose "sanctions" on McCarrick but issued recommendations orally in 2006 and in writing in 2008, without making it explicit that these were orders from Pope Benedict, the report explains.

The report concludes with words from Francis' 2018 letter acknowledging "once more the suffering endured by many minors due to sexual abuse, the abuse of power and the abuse of conscience perpetrated by a significant number of clerics and consecrated persons."

"The pain of the victims and their families is also our pain, and so it is urgent that we once more reaffirm our commitment to ensure the protection of minors and of vulnerable adults," Francis pleads.

I think Frankie is as gay as McCarrick.

I’m convinced they are doing to the Church, the same thing they did to the Boy Scouts of America.

He lives with them instead of the papal apartment. I gotta say my gay-spidey-sense got buzzing when I first read about that. 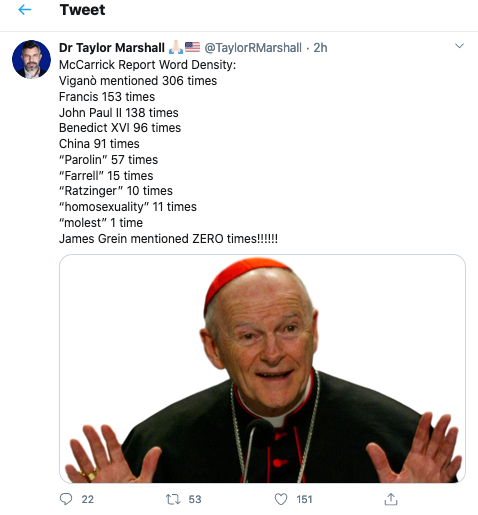 B16 told him he could NOT perform priestly duties. It was Francis that over ruled him.

I suspect this wretched Pope wants to make sure e has as much evidence on everybody as possible. He may be gay, but I tend to think he really just wants to blackmail everybody. He is diabolical.