WASHINGTON — Men and women who once identified as LGBT shared their personal stories of transformation with lawmakers Wednesday after the House passed a bill earlier this year that would bar citizens from accessing counseling and therapies for unwanted same-sex attraction.

Dressed in black T-shirts emblazoned with the word "CHANGED," 16 formerly LGBT-identified persons from Church United and the CHANGED movement spoke at a joint news conference outside the U.S. capitol where they shared their stories with members of Congress and their staff, and urged senators not to support the so-called Equality Act if it's ever brought to the floor for a vote.

"There are bills behind us that are going to take away our rights," said Jim Domen from Church United.

Domen said he has dealt with same-sex attraction since the seventh grade and even identified as a gay man for five years, but today he's married to a woman and has three children. He described his years in his former life as a search for love where he was so desperate that he did not care if his sexual partners had hepatitis or were HIV-positive.

"My two daughters and son don't think I'm a fraud, they know that I'm real," he said. "We exist. We are people who have changed."

He and others stressed the importance that they should have the right to pursue counseling options in accordance with their faith, therapies that would be restricted under H.R. 5, the Equality Act — an updated version of the 1964 landmark civil rights legislation considered by many to be Dr. Martin Luther King's legacy — which passed the House of Representatives earlier this year. The bill is being pushed by LGBT activist organizations.

Domen emphasized: "I want to very clear about something, all of us here, we love, we absolutely love the LGBTQ community. We understand you. We know what it's like. We've lived there, we've walked it. We've been from gay bars and back. We know the journey. We know the pain."

As currently proposed, the Equality Act explicitly nullifies protections set forth in the Religious Freedom Restoration Act. The Senate version of the Equality Act, S.788, which was introduced in March to the Senate Judiciary Committee, is not presently being considered for a committee vote — Republicans hold the majority — and will not make it to the floor for a vote.

The Trump administration said in May that the Equality Act is "filled with poison pills that threaten to undermine parental and conscience rights."

Among those who spoke Wednesday was KathyGrace Duncan, who formerly identified as transgender — whose story of coming to faith and detransitioning was featured in The Christian Post's 2017 series on transgenderism — and Luis Javier Ruiz and Angel Colon, both whom survived the mass shooting at Pulse nightclub in Orlando, Florida, in June 2016 that was committed by an ISIS sympathizer. Colon was shot several times and Ruiz was trampled as he fled the scene. Today the two men lead a ministry called Fearless Identity.

Liz Flaherty, who identified herself as a former lesbian, recounted how she was molested at age 6 by a family member, which she hid from her parents. Tormented and feeling alone from keeping that a secret, the anguish continued through her formative years as she was bullied by male peers. No matter how hard she tried she could not relate to men and came out as a lesbian during her senior year in high school, much to the confusion of her Christian parents who were pastors at that time.

"Even though they were confused they loved me, they didn't reject me. They kept an open home to me. They didn't kick me out, unlike stories you hear a lot of that saddens many of us who did have loving parents," Flaherty said.

"I truly was in agony. I was agoraphobic; I was riddled with anxiety; I was depressed. I never wanted to leave the home. I was self-medicating through pornography."

After losing both of her parents to cancer within a three-year period, Flaherty returned to her faith and decided to look for help in processing her traumas. She sought out a faith-based counselor who walked her through resolving her conflicted feelings.

"There was no promise to make me straight, there was just allowing room for me to question this dynamic of self-protection that I had put up through years of abuse," she explained, noting that her attractions then shifted.

"I'm more myself than I've ever been in my life. I'm discovering more and more of who God made me to be. And I'm freed from the agony that I was in, from the depression, from the self-loathing, from those tormenting emotions. I can be out in public without anxiety attacks. I can travel on a plane. Those were things I could never do before," she said.

Mentioning how many of her fellow speakers were saying "change is possible," she echoed Domen in calling for legislation that allows for the broadest range of counseling.

"We need a government that respects our God-given freedom seek it out," Flaherty said.

When Christopher Sims was very young growing up in New York City, his father, a pastor, raped him. After entering kindergarten his mother withdrew him from school, a withdrawal that lasted eight years.

"During that time I was tortured by my mother. My mother was very hurt by men, so any sign of masculinity was a trigger and a threat to her. I can remember her beating me with a wire hanger until I was bloody, and putting alcohol all over my body as I stood in front of a mirror," Sims said.

He internalized in that moment that he could not be masculine, that he had to emulate his sisters and be effeminate in order to survive and avoid upsetting his mother. By the time he was 13, he was able to stay with his sisters and slowly transition out of his parents' home. By the time he was 18, he was suffering from gender dysphoria, PTSD, and was in counseling and anger management. He ended up going to church service with a friend and saw something in the eyes of people he'd never seen previously.

"I wanted nothing to do with church, but when I went to that church I saw a God that my parents did not tell me about. And those people in that church, they didn't hate me or anything. They loved me. I saw life inside of them and I wanted that freedom and that life. The love I saw in their eyes convicted me of the error of my ways," Sims recalled, noting that he subsequently had an encounter with God in which God told him, "Christopher: I love you."

That was six years ago, Sims continued, and God's love has enabled him to forgive and heal. He now has a relationship with his parents, no longer suffers night terrors, and said he is the healthiest he has ever been.

"And I want to say change is possible. People like me do exist," he said.

Kevin Whitt, a former transsexual prostitute and drag performer, used to believe that both God and Christians hated him, telling The Christian Post in an interview after the news conference that his own uncle, a Baptist minister, would often tell him that God hated him and that his punishment for being gay or trans was to get AIDS and die.

Yet later in life, after he received Christ and started going to church on his own, he began seeing that, with the exception of a few fringe denominations, for the Christian faith as a whole, none of that was true. When he was living as a transgender person, presenting as a woman, he routinely felt that he could never come to Christ and believe in Him.

During his prepared remarks at the news conference, Whitt insisted neither he nor any of his friends had been through what is often derisively called "conversion therapy."

Asked what he would say to Christian leaders who are struggling to know how to best pastor persons who identify as LGBT in light of clumsy and painful approaches from years and decades past, similar to what he experienced in his own life, Whitt underscored the importance of loving people unconditionally.

"It's really simple. You have to pastor them in love. It's all about loving them into a relationship with Jesus Christ. What the church is guilty of is not loving the gay community, especially back in the old days they used to just drill on it being a sin," he replied.

"The Bible is very clear about what is sin, but they left out the love part."

When Whitt goes out with teams to minister to people at gay pride parades, he frequently encounters people who can't believe he and his compatriots are Christians.

He tells them: "Well, this is how most of us are." 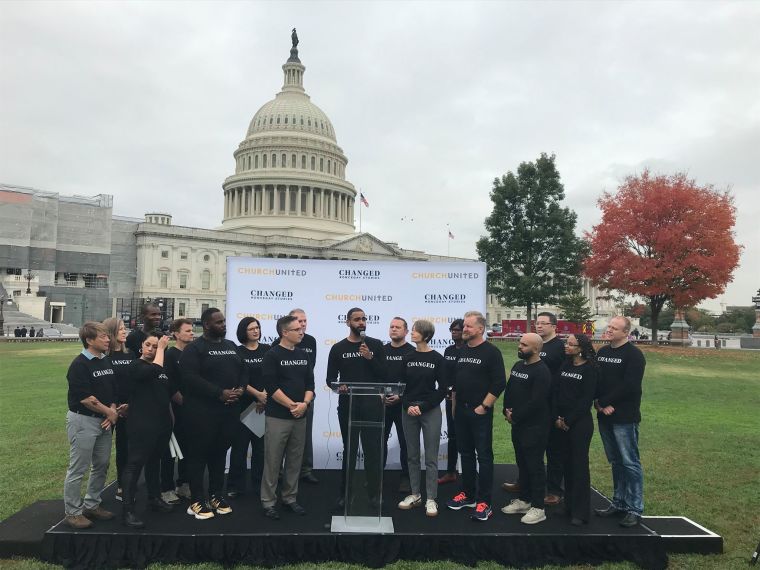 Pulse nightclub shooting survivor Angel Colon speaks at a joint press conference outside the U.S. Capitol with the CHANGED movement and Church United on October 30, 2019

I’m surprised Nancy didn’t chase them off her lawn.

Every homosexual I have met is miserable and is holding some trauma. I remember one gay man, a cousin of a good friend, telling me, sobbing: “do you think I WANT to be this way??”

What else is sex attraction but being “imprinted” with your first experience. In homosexual individuals, it is likely to have been a same sex encounter. Nearly every “altar boy” I have ever seen reported as having been sexually molested by a Priest was then homosexual. Now either the sex was consensual no matter the age, or the kids were seduced by a man of power and influence, and were easily led by the weakest organ, the penis.

EVERY homosexual,lesbian or all other “identifiers” I have come across in life have mental and emotional issues. Suicidal,delusional,paranoid,angry,hyper-sexual and outright deviancy are the norm. They are being used by the left and it’s sickening.

If you’re a man, nothing - and I mean nothing - absolutely beats holding onto the smooth, soft skin of a woman in the middle of the night. IMO it’s the best feeling ever. Well, maybe the 2nd best, after the woman wakes up and surprises you and then...