How NOT to do Eucharistic Adoration [CATHOLIC CAUCUS]
Archdiocese of Washington ^ | 5/8/2014 | Msgr. Charles Pope The video below is, well, a very poor example of Eucharistic Adoration. I suppose the most charitable thing that we can say is that it’s good to see Catholics rejoicing and happy. However, as with most things, there is a proper time and place for the particular sort of rejoicing seen here, but this is not one of those times.

In Eucharistic Adoration, the fundamental focus is Jesus himself. The norms generally indicate

Exposition of the holy eucharist, either in a ciborium or in a monstrance, leads us to acknowledge Christ’s marvelous presence in the sacrament and invites us to the spiritual union with him that culminates in sacramental communion. Therefore it is a strong encouragement toward the worship owed to Christ in spirit and in truth.

In such exposition care must be taken that everything clearly brings out the meaning of eucharistic worship in its correlation with the Mass. There must be nothing about the appointments used for exposition that could in any way obscure Christ’s intention of instituting the eucharist above all to be near us to feed, to heal, and to comfort us (CDW. Eucharistiae Sacramentum, 82).

It is also interesting to note that the word “monstrance” (the large and usually golden sunburst in which the Host is placed in order to be seen) comes from the Latin verb monstrare,  meaning “to show.” Hence one of the main points is to see the Lord, to see the Sacred Host.

The word “adoration” also bespeaks a very personal, intimate relationship between the believer and the Lord. As Pope Benedict noted in the encyclical Deus Caritas Est, the word adoration bespeaks a sort of kiss (ad (to) + oro (the mouth). Etymologically then, adoration paints a picture of a kiss on the lips. It thus bespeaks intimacy.

So the key concepts in Eucharistic Adoration are visibility and intimacy.

Another interesting historical fact is that until recently, when preaching took place during Eucharistic Adoration (say during the Forty Hours’ Devotion), the Sacred Host was veiled while the preaching took place. The thought was that when Jesus was so visibly present in the Sacred Eucharist, it would be irreverent to turn our attention elsewhere, in this case toward a preacher. And while this practice is no longer required, it is still widely followed, and it emphasizes reverence and the kind of instinct that our focus should be wholly on the Lord when He is exposed for adoration.

Unfortunately, all these principles seem set aside in the video below. As our Lord is placed in the monstrance, dancers and waving, gesticulating clergy vie for attention. Meanwhile, seemingly no attention at all is upon the Sacred Host. The altar servers seem to have a hard time getting through to bring incense, and though they finally do, the celebrant seems to have no interest in reverencing the sacred host with the incense, as is properly done.

Whatever the focus is supposed to be in this rather chaotic scene, it is clearly not on Jesus.

I do not wish to speak uncharitably of anyone in this video (and ask that you do not either). It does not seem to me that anyone is being intentionally irreverent. But liturgical sensibilities are clearly poor, and the actions are inappropriate to the setting. None of what is taking place here fits the purpose, meaning, or focus of Eucharistic Adoration.

Charismatic forms of worship, while not preferred by everyone, do have a place in the Church. But even those who appreciate such forms of worship will surely admit that this is not the proper context for charismatic worship of this sort. Time and purpose are important governing principles for Liturgy.

None of this is to insist that there be tomb-like silence during the entirety of Eucharistic Adoration. Here too the norms generally state,

During adoration with a group present, there should be prayers, hymns and readings to focus the faithful on worshipping God. To further encourage a prayerful spirit, there should be readings from Scripture with a homily or brief exhortations to help develop a better understanding of the Eucharistic mystery. The Church also recom- mends periods of silence and the faithful?s singing in response to the Word of God (Eucharistiae Sacramentum, 95).

Thus there is some place for hymns, readings, and prayers to be spoken aloud. However, one will note that the purpose is “to focus the faithful on worshipping God.” This would seem to preclude chaotic activities that block the view of the faithful and vie for attention with the Sacred Host, Jesus, who is set forth to be seen and adored and is the specific focus of Eucharistic Adoration.

OK, please be careful  in the combox. Caritas suprema lex! Let us not exhibit hateful or ridiculing language even as we talk about the adoration of one Jesus! It’s OK to mention preferences and what seems suitable or not. But try to avoid hurtful denunciations and divisiveness (pre-VCII vs. Post-V II, EF vs OF). The norms from any era call for great reverence in the Adoration of the Eucharist; let’s also show a little reverence for one another, who are made in the image of God.

CAUTION: THIS IS A CATHOLIC CAUCUS THREAD

Per the illustrious Religion Moderator's page:

This instance happened in a parish in Oleggio (NO), in the region of Piedmont. Link to the original video is here.

Ugh. I’m speechless. I totally blame the priest because it is his duty to protect the consecrated host. All the women in front of the altar in white robes gave me the creeps.

Good luck with that, Msgr. What likely response is there, other than, "Oooooh, look at what those dreadful people are doing!!! I'm so much better than that!"

Homosexuals have completely ravaged the bribe of God. This looks more like the Heavens Gate cult than the church I grew up in. All part of the plan to destroy the family and western civilization.

It looks like they’re doing “the chicken dance” - a staple at Italian-American weddings. Not anything I remember during the Adoration.

Is this a black mass? Of course not. Are these people creating a mess? Yea. Do they seem to love the Jesus and want to be around Him? Suffer the little children. The adult little children, who love like children.

Like Archibold said - I’m Catholic and I’m not going anywhere. I will suffer things like this for my Jesus - and suffer very little here because I think Jesus is almost not suffering at all here.

What makes me suffer is the Monsignor pointing this out. He should have left it in Italy....maybe it wouldn’t spread ideas all over the internet world!!

they turn their backs?

Ugh is what I say too. I prefer “tomblike silence.” However, some people need a lot of noise and clapping and dancing around them. Silence is boring for many. Silence also does not guarantee focus on Jesus, it is pretty easy to drift off into thoughts about other things. Just making the effort to go to adoration is a good thing.

Again, as a child, I adored the silent (and strictly enforced) spiritual rituals of the Catholic faith. What a balm in was on the spirit of children who had come into church directly after being hit by a nun, lol! How I remember the thick velvet curtains of the confessional, the red glass in the stained glass windows, the tapers...wow, I'm having a Proustian moment. I think the children in the video are being deprived of the great beauty of Catholicism. 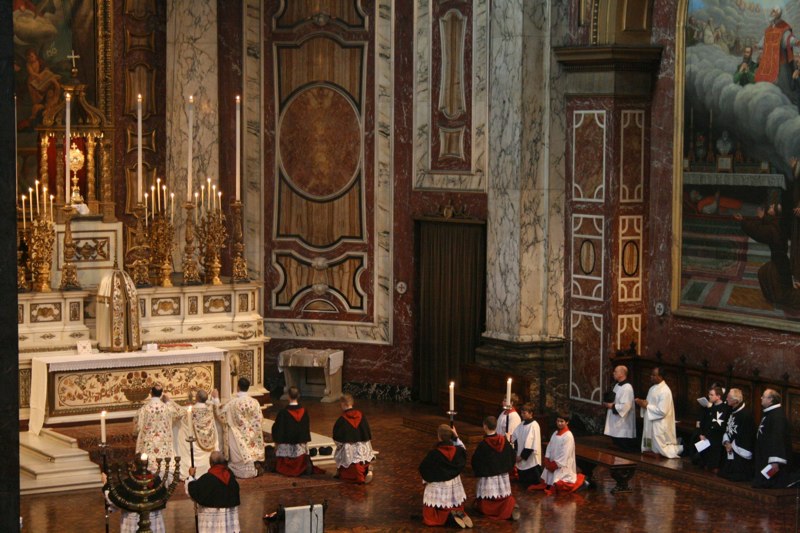 I agree. While London's Brompton Oratory may be at the other extreme (consider this photo eye-wash) but this form of Catholicism, more or less, was available in every corner of the globe, from the humblest parish in the Bronx to the remotest depths of the Amazon. Now, not so much. We are poorer for it.

Thank you flaky, burnt-out priests and sisters of the 60s and 70s. If it weren't for your vocational crisis, I would never have known the simple joys of felt banners and Marty Haugens.

I’ve attended Mass at Brompton Abbey. It is vey beautiful. I grew up in NYC so all the churches of my youth were derived from European sources - all very grand, very dark and solemn. I’m not big on happy Masses.

The best place to attend Mass is Paris. There is often classical music played before and after by very devout-looking nuns. While I’ll admit the pews weren’t very full, the people who were there seemed very devout as well. I’ll never forget the kind young man who scurried to bring me a missal.

Is jealousy permitted in this context? I think it may fall under "coveting another's spiritual goods?"

Well, it was 1972 and my mother dragged me there! But it was quite a place.

Your photo reminds me of the end of the first act of “Tosca.”

15 posted on 05/09/2014 6:53:34 AM PDT by miss marmelstein (Richard Lives Yet!)
[ Post Reply | Private Reply | To 14 | View Replies]
To: miss marmelstein
Your mother was right to do so! I was in Paris a few years ago and dropped into St-Germain l'Auxerrois near the Louvre. I was struck by the number of Parisians of all ages who were making "a little visit." I'd seen this in a few parish churches in Brittany and Normandy a few days before but didn't expect to see it in the big city. Quite heartening, actually.

Tosca must be one heck of a thing to stage.

16 posted on 05/09/2014 7:17:00 AM PDT by Oratam
[ Post Reply | Private Reply | To 15 | View Replies]
To: Oratam
The Met production of Tosca was created by the loony but lovable Franco Zefferelli. Since the Met is richer than Croesus, yes, it looked exactly like Brompton Abbey - except there are no donkeys, horses and pigs when I attended Mass.

France gets a bad rap at FR. I like the French and French Catholicism is a thing of beauty.

It’s comforting that the Eldest Daughter of the Church hasn’t fallen away completely . . .

My thoughts exactly. Throughout history, even in the darkest hour when all seems lost, there has always been a small nucleus of the faith to carry the hope of future growth. Even in France.

Well, then they should avail themselves of the many excellent adult ADHD medications available to those in need of excess stimulation (Strattera, et al) and attend the Adoration in a fully medicated state. I say this not out of meanness nor haughtiness, but out of concern for the souls of my fellow exuberant neo-Catholics.

Just making the effort to go to adoration is a good thing.