The Vatican Press Office has published the details regarding the preparations for the canonisations of Blesseds John XXIII and John Paul II, to be celebrated on 27 April. Hundreds of thousands of people are expected to be present 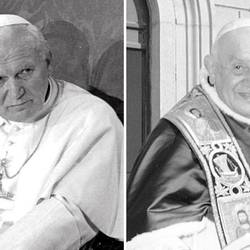 A simple prayer vigil in various churches across Rome the night before the big day, hundreds of thousands of faithful and the possible - though as yet uncertain – presence of the Pope Emeritus Benedict XVI. This is what the Vatican has in store for the double canonization ceremony that will make John XXIII and John Paul II saints this coming 27 April in St. Peter’s Square. The diocese of Bergamo (Angelo Roncalli’s home diocese), has earmarked three charity funds for the occasion, with generous direct contributions from priests.

“Canonizations are a gift from God, which the Lord gives to us, presenting two men of faith as models of Christian life,” Cardinal Agostino Vallini, vicar of His Holiness for the diocese of Rome, said at a press conference  in the Vatican today. “So let us seek to follow this path, the path towards a deeper spirituality. This, I would say, is the spirit in which we should prepare for this event.” Mgr. Walter Insero, head of the Office for Social Communications for the Vicariate of Rome explained that the double canonization ceremony will be preceded by two events. At 8:30 pm on Tuesday 22 April there will be a youth meeting in the Basilica of St. John the Lateran. The meeting which will be mostly attended by young people from Rome, will be presided by Cardinal Agostino Vallini and speeches will be given by the postulators of the two causes, Mgr. Slavomir Oder (Postulator of the Cause for John Paul II) and General Postulator Fr. Giovangiuseppe Califano (Postulator of the Cause for John XXIII). This will be followed by a catechesis preached by Fr. Fabio Rosini, director of the Vicariate of Rome’s vocations office.

Unlike the prayer vigil held the day before Wojtyla’s beatification in 2011 at Rome’s Circus Maximus, this time, sobriety is the order of the day. On Saturday 26 April, the day before the canonization ceremony, there will be a “white night of prayer” starting at 9 pm, when churches across Rome will be open for people to go and pray and confess. Readings from Biblical texts and excerpts from various texts written by the two Popes’ are expected. Eleven churches will also hold liturgical celebrations in a number of languages. Various social media accounts are being launched ahead of the big day, above all to get the young involved: www.2papisanti.org will be available in various languages and Twitter users will also have access to a Twitter account created specially for the event: @2popesaints. But there will also be YouTube and Facebook coverage of the canonizations. In the coming days, the “Santo Subito” app – dedicated to John Paul II – will be available for Android and IOS.

Vatican spokesman Fr. Federico Lombardi also gave information on some events that have been planned for the canonizations on 27 April. These too are of a sober nature. Divine Mercy Sunday will be celebrated as it was on 1 May 2011, the day of Wojtyla’s beatification. Pope Francis will preside a mass starting at 10 am in St. Peter’s Square. The Chaplet of Divine Mercy will be recited and texts by the two Popes read. There will be about a thousand concelebrating bishops and cardinals present, at least seven hundred priests, who will administer communion in St. Peter’s Square and hundreds of deacons along Via della Conciliazione.

The director of the Holy See Press Office said the tapestries used during the canonizations will be the same ones used for the beatifications. The same relic used as John Paul II’s beatification will be used now for his canonization and an identical one will be made for John XXIII. There was no relic at John XXIII’s beatification ceremony because his body had not yet been exhumed. The two women who were miraculously healed by John Paul II will be present at the celebration, while Francis has exempted John XXIII from a second miracle.

After the mass, faithful will be able to venerate the tombs of the two new saints, which will now carry the inscription “saint” instead of “blessed”. This will be a ticketless ceremony, Fr. Lobardi informed. “Anyone can turn up and attend but no tickets will be presold. Don’t ask for them at the prefecture because there won’t be any,” he said.

As far as the possibility of the Pope Emeritus Benedict XVI attending the ceremony on 27 April, “naturally anticipation is high. He will naturally be invited, but there is still a month to go. We will have to wait and see if he feels up to it and if he wishes to be present at such a big event. The possibility is there but nothing is certain,” Fr. Lombardi said.

Hopefully there will be sobriety as well ;-).