“Your ancestors ate the manna in the desert, but they died;
this is the bread that comes down from heaven so that one may eat it and not die.

I am the living bread that came down from heaven; whoever eats this bread will live forever; and the bread that I will give is my flesh for the life of the world.”
The Jews quarreled among themselves, saying, “How can this man give us (his) flesh to eat?”

Jesus said to them, “Amen, amen, I say to you, unless you eat the flesh of the Son of Man and drink his blood, you do not have life within you.
Whoever eats my flesh and drinks my blood has eternal life, and I will raise him on the last day.

For my flesh is true food, and my blood is true drink

This is the bread that came down from heaven. Unlike your ancestors who ate and still died, whoever eats this bread will live forever.”

These things he said while teaching in the synagogue in Capernaum
Then many of his disciples who were listening said, “This saying is hard; who can accept it?”

Since Jesus knew that his disciples were murmuring about this, he said to them, “Does this shock you?

What if you were to see the Son of Man ascending to where he was before?
It is the spirit that gives life, while the flesh is of no avail. The words I have spoken to you are spirit and life.

But there are some of you who do not believe.” Jesus knew from the beginning the ones who would not believe and the one who would betray him.
And he said, “For this reason I have told you that no one can come to me unless it is granted him by my Father.”

As a result of this, many (of) his disciples returned to their former way of life and no longer accompanied him

Jesus then said to the Twelve, “Do you also want to leave?”

Simon Peter answered him, “Master, to whom shall we go? You have the words of eternal life.

We have come to believe and are convinced that you are the Holy One of God.”
Jesus answered them, “Did I not choose you twelve? Yet is not one of you a devil?”

Thank you for your contribution.

Saved? I’m a work in process. Not because God isn’t faithful, but because I’m not always as much so as I could be.

Religious in the sense that I think I can do the outward stuff without really believing and earn my way onto God’s good side? Not hardly. I know I’m nowhere near good enough. Religious in the sense that having received incredibly generous gifts from God, I want to do the outward stuff because I’m grateful? Guilty, guilty, guilty. 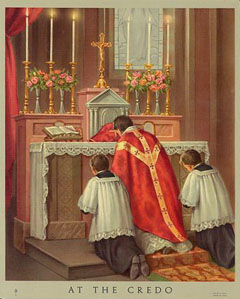