"In front of Pilate, Christ affirmed three times that He was a King in the same sense that Pilate understood it. 'Then you are a King?' Jesus answered, 'You say that I am a King,' in other words, 'You are correct.' It is true that He told him, 'My kingdom is not of this world,' but He did not say, 'My kingdom is not here.' He used the adverb 'hinc' (Regnum meum non est hinc) which indicates movement and does not exist in English. This adverb 'hinc' meant three things at the same time, 'My Kingdom does not proceed from this world, My Kingdom is in this world; My Kingdom goes from this world to the other world.'

Apparently He is a 'poor King' who doesn't rule much these days, since if He were reigning, the world would be better. A large part of the world doesn't even know Him; another part knows Him and renounces Him, like the Jews, 'Nolumus Hunc regnare super nos' - 'We do not want this man to reign over us' (Lk. 19:14); finally, another part of the world recognizes Him in word but denies Him in deed; we are those cowardly Christians. But there is something else that Christ noted, that if a king's subjects rebel against him, he doesn't stop being king as long as he retains the power to punish them and to subjugate them once again. If he didn't have that power, that's another thing. And so today modernist heretics admit that Christ is King 'in a certain sense', but they deny the Second Coming of Christ. Then, yes, He would be a poor King. The modernists either entirely change the meaning of the Parousia, turning it into something else (as in the case of Teilhard de Chardin) or they say it will come in 18 million years - which is to say 'never.'

Pope Pius XI instituted the Feast of Christ the King against 'Liberalism;' Liberalism is precisely a form of cowardice. Liberalism denies the Kingship of Christ, His power by right over human society. This current Christian heresy is complicated..Liberalism eliminated the Kingship of Christ by saying something [ostensibly] 'innocent': that religion was a private matter, and therefore nations should respect all religions and the Church should not get involved in things that don't concern her--in other words, in public affairs. However, the great German philosopher Josef Pieper observes that if we make God a private matter (a matter within the conscience of each person), by the same token we convert the State into God; and we turn Jesus Christ and the Eternal Father into sub-gods. Indeed, this means that because the State is a public affair, religion would therefore be inferior to it and would have to submit to the State, since what is public is far superior to what is private and the private must submit to it.

In fact, history soon showed that 'liberal secularism', or supposed neutrality regarding religion, was in reality true hostility; and it ended up deifying and divinizing the State."

TOPICS: Catholic; Religion & Culture; Religion & Politics; Theology
KEYWORDS: catholic; christ; king
"Argentine priest Fr. Leonardo Castellani, S.J. (1899-1981)...suffered intense persecution from the Jesuit order during the forties and fifties for refusing to embrace the theories of Teilhard de Chardin and remaining faithful to St. Thomas Aquinas; he even suffered forcible confinement in Spain for two years and was eventually expelled from the Jesuit order as the sons of St. Ignatius began to embrace modernism." 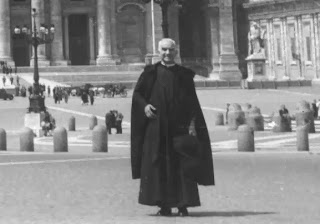 Thanks for the ping, Pyro.