VATICAN CITY -- Pope John Paul II whipped himself with a belt, even on vacation, and slept on the floor as acts of penitence and to bring him closer to Christian perfection, according to a new book by the Polish prelate spearheading his sainthood case.

The book "Why He's a Saint" also includes previously unpublished speeches and documents written by John Paul, including one 1989 signed memo in which he said he would resign if he became incapacitated.

The book also reported for the first time that John Paul forgave his would-be assassin in the ambulance on the way to the hospital moments after he was shot on May 13, 1981, in St. Peter's Square. And it reported that he initially thought his attacker was a member of the Italian terrorist organization the Red Brigades.

The book was written by Monsignor Slawomir Oder, the postulator, or main promoter, for John Paul's canonization cause and was released Tuesday. It was based on the testimony of the 114 witnesses and boxes of documentation Oder gathered on John Paul's life to support the case.

At a news conference Tuesday, Oder defended John Paul's practice of self-mortification, which some faithful use to remind them of the suffering of Jesus on the cross.

"It's an instrument of Christian perfection," Oder said, responding to questions about how such a practice could be condoned considering Catholic teaching holds that the human body is a gift from God.

In the book, Oder wrote that John Paul frequently denied himself food -- especially during the holy season of Lent -- and "frequently spent the night on the bare floor," messing up his bed in the morning so he wouldn't draw attention to his act of penitence.

"But it wasn't limited to this. As some members of his close entourage

And yet he never found the courage to bust Rembert Weakland.

No Thanks! I get enough of that clicking thru CNN and MsLsdNbc as is..

His inaction against the Church's 'lavender mafia' was his biggest failing. But in many other ways he was a holy man well worth emulating.

Many may laugh at this or find it offensive. I do not. I find it admirable. When one looks at how we often damage our body and souls and hurt ourselves and our loved ones with our sinful behavior, anything in penance or in intensity to ward off sin is desirable compared to the pure sin that cuts us and even our beloveds off from God. I admire his commitment and intense desire for closeness to God.

I have a suspicion there was an ingrained factor which prevented easy extraction. Sort of like a cancerous growth with tentacles of "unknown" origin.

JPII, however, did remove a few of the theological bad apples.

This is the least surprising part of the article. That's just the way he was.

He deserves to be canonized. Such a good man!

One more example of the error of Rome.

“If you have died with Christ to the elementary principles of the world, why, as if you were living in the world do you submit yourself to decrees, such as, ‘Do not handle, do not taste, do not touch!’ (which all refer to things destined to perish with the using)- in accordance with the commandments and teachings of men? These are matters which have, to be sure, the appearance of wisdom in self-made religion and self-abasement and severe treatment of the body, but are no value against fleshly indulgence.”

Wonder why he never listened to the real Paul?

So self-flagellation is also a sign of commitment and intense desire for closeness to God?

My dad did something similar to me.

The moderate sort of flagellation described here is nothing, not even a fraction of the sort of pain high school football players voluntarily undergo in August practices or marathon runners put themselves under in order to train or soldiers endure in order to train, be fit, for combat.

Ascesis is the Greek word for training. You would have absolutely no problem with the “no pain no gain” principle in athletics, I assume?

The same is true of learning a language or raising a child or starting a business. No pain, no discipline, no gain.

From the description, he used a simple leather belt that did not draw blood. The word “flagellation” has your knickers in a knot. Mortification can be practiced to extremes. So can athletics. So can just about anything. But the actual description of John Paul’s practices shows that it is mild compared to what we take for granted in athletics and a host of other endeavors.

Step back, think it over. 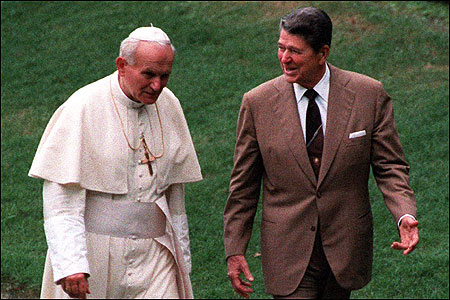 This translation is not universally agreed upon - and seems to contradict "I chastise my body and bring it into subjection: lest perhaps when I have preached to others I myself should be castaway" (1 Corinthians 9:27)

The reason why John Paul II did this was because he wanted to make himself more open to God’s will and to root out sinful desires even the non-sinful ones.

Ancient tradition among Catholic clergy. Most don’t practice this, but many do, and I would say probably most have given it a try at some point, hard to say as it is generally a very private thing. Also done by many of the more committed of the laity.

The Preoccupation With Self-Glory (v. 23)

“These things have indeed a show of wisdom in will-worship, and humility, and neglecting of the body, not in any honor to the satisfying of the flesh.”

This verse is really difficult to translate, so I am going to give you my translation with a little broadening so you can understand it: All regulations of this kind have a reputation for wisdom, they intimidate and appear to be the divine wisdom. A man keeps all the rules, has the higher visions, communes with the angels, receives revelations, and is in abject self-abasement in poverty, all because of self-made humility and unsparing treatment of the body. But it is of no value because it serves only to satisfy the flesh. That is simply carnality—trying to glorify yourself as the one who can either save or make himself spiritual.

Self-styled ritual, self-styled mysticism, and self-styled poverty for the sake of apparent piety and holiness just panders the flesh. That religion is godless because the people worship themselves. Their humility is fake because it is nothing but a masking of spiritual pride. And their self-denial is a false standard because it is an effort to make themselves more holy than others. In all of those exercises they serve only to indulge their carnal flesh.

And just to be clear, “Self-styled ritual, self-styled mysticism, and self-styled poverty for the sake of apparent piety and holiness” is not what John Paul II was doing; he ‘”frequently spent the night on the bare floor,” messing up his bed in the morning so he wouldn’t draw attention to his act of penitence.’