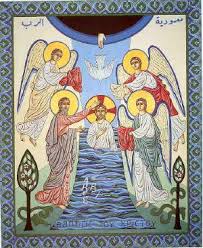 Today the Maronite Catholic Church celebrates the feast of the Epiphany of our Lord Jesus Christ. In the Eastern Churches this feast is known by two names: Epiphany and Theophany. The Greek word Epiphany means manifestation or an apparition and the word Theophany refers to an appearance of God. On this day we celebrate the appearance or manifestation of Christ among us as God's Son.

The feast of the Epiphany was first celebrated in the East around the third century and eventually was dropped by the Western Church. In the Eastern Churches the celebration of the Epiphany originally centered on both the Birth of our Lord and his baptism.

The feast of the Epiphany is intimately connected with the mystery of our Lord's birth. The Child who was born for us and the Son who was given to us is manifested before us to be the Son of the Most High. Christ begins his public life with his baptism by John in the Jordan river. At his baptism Christ is seen as the fulfillment of John's preaching: He is the Messiah and the Lamb of God who takes away the sins of the world. The Father and Holy Spirit are witnesses to Christ for he is the beloved Son of the Father and upon him the Spirit rests. Thus at the baptism of the Lord we have not only an epiphany or manifestation of Christ as God's Son, but also Theophany or Manifestation of the Holy Trinity - Father, Son and Holy Spirit.

The feast of the Epiphany reminds us not only of the baptism of Christ, but also of our own baptism. St. Ephrem in his Hymn of Epiphany says: "...our blessed Lord came to be baptized with sinners and because of his glory the heavens were opened. The One who purifies all creatures, desiring to cleanse them, went into the waters and sanctified them for our baptism." It is for this reason that we bless water on this day. Originally, the mystery of baptism was celebrated on this feast and the waters blessed were those of baptism.

It is time for Meche’s Bavarian cream king cake.

2 posted on 01/06/2010 12:16:19 PM PST by cajuncow
[ Post Reply | Private Reply | To 1 | View Replies]
To: netmilsmom; thefrankbaum; markomalley; Tax-chick; GregB; saradippity; Berlin_Freeper; Litany; ...
The Syriac Church considers the Baptism of Christ to be the central event that established the mystery of Baptism. Through Baptism in the Jordan River, Christ consecrated all the rivers of the world.

The fulfillment of Christ's baptismal action takes place on the cross, when blood and water flow from the side of Christ. However, the earliest tradition did not stress the idea of 'dying and rising' concerning Baptism, but rather, Baptism ass a new wonb giving birth to new children bearing the image of the New Adam and being vested again in the "robe of glory". Baptism reverses the sad events of Paradise.

The Baptism in the Jordan

Speaking about the Syriac tradition, S. Brock says that the baptism of Christ was the source of of Christian baptism. At his Baptism, there is the public proclamation of his Sonship [Mark 1, ll]. Even in the New Testament, it seems that Christ's baptism was regarded as 'anointing' [Acts 10, 38; see Lk 4, 18], and the choice of Psalm 2, 7 provided a basis for Jesus' baptism as his public anointing as Messiah-king.7

Ephrem views the baptism of Christ in the water as analogous to the divine presence in the womb of Mary and therefore as the means for divinization. Also, using Moses as an example, he claims that just as God in his mercy limited himself by coming to Moses, he does the same for feeble human beings. In his beings. In his Hymn on Epiphany, No. 8, he explains.

God in His mercy stooped and came down,
To mingle His compassion with the water, and to blend the nature
of His majesty with the wretched bodies of men.
He made occasion by the water
To come down an to dwell in us;
Like to the occasion of mercy
When He came down and dwelt in the womb:
O the mercies of God
Who seeks for Himself all occaskion to dwell in us!

To the cave in Horeb He stooped and came down,
And on Moses He cause His majesty to dwell;
He imparted His glorious splendor to mortals.
There was therein a figure of Baptism:

He who came down and dwelt in it,
Tempers within the water
The might of His majesty,
That He may dwell in the feeble
On Moses dwelt the Breath,
And on you the Perfecting of Christ.

That might then none could endure;
not Moses chief of deliverers,
nor Elijah chief of zealots ;
and the Seraphim too veil their faces,
for it is the might that subdues all.
His mercy mingled gentleness
In the water and by the oil;
That mankind in its weakness
might be able to stand before Him
When covered by the water and the oil.8

In his Hymn on the Ephiphany, No. 9, Ephrem further Teaches that Baptism renders humans children of the Spirit and that Christ becomes the new Adam and the new head of the Body of Christians. Ephrem also symbolizes the power of divinizarion by speaking of a column extending from the Hordan to the heavens. He describes John as seeing the Spirit on the head of Christ who as the "Head of the Highest" was baptized and became "Head on earth". Christians are therefore children of the Spirit, members of Christ who is the Head. Ephrem sontinues:

.....Open wide your minds and see, my brethren,
the secret column in the air,
whose base is fixed from the midst of the water
unto the door of the Highest Place,
like the ladder that Jacob saw.
Lo! By it came down the light unt Baptism,
And by it the soul goes up to Heaven,
That in one love we may be mingled.9

In regard to this citation, it can also be note that in the earlier Syriac tradition, Christ was seen as consecrating the water of the Jordan in terms of the imagery of fire. This may be a reflection of Isaiah 6, 6. S. Brock cites James of Serug as saying: " The Holy One came to the water to go down to be baptized; his fire kindled among the waters and set them alight." The Jordan was sometimes referred to as a furnace. 10

The Maronite liturgy in the ritual for Baptism reflects the tradition. It says concerning Christ: "...He who was without need or lacking was baptized in the Jordan consecrating for us this womb which is the baptismal font, a salutary and fruitful womb. He, thence, according to his design, yours and that of the Holy Spirit, lived in the world, in three dwellings: the womb of flesh, the baptismal womb, and the obscure dwellings of sheol..." 11

Thus, as a person who loves his Christmas lights, I find Maronite Catholicism to be pretty awesome.

Happy Feast of the Epiphany, and God Bless!

I making cheeseburgers with onions on toasty buns.

Happy Epiphany to you, as well.

In the East and Asia, Catholics and Christians remove their Christmas Tree and Lights on the day after Epiphany. By this time most Christmas Trees have begun to wither anyway. But in most American households we see the lights off and the trees all cut-up within a day or two after Christmas.

When I was a child (back in the days of the dinosaur ;-), the Christmas tree did not go up until Christmas Eve, because that is when Christmas began and came down the day after Epiphany because that is when Christmas ended. And, yes, that was right here in the U S of A. In the 1947 film The Bishop's Wife, again you see the tree being decorated on Christmas Eve. This tradition began to change with the growth of marketing, as advertisers began promoting Christmas earlier and earlier. We put up our tree (a real one) on December 13th and it is still fresh and beautiful. I intend to enjoy it for another week. It will come down on MLK weekend.

They don’t make them big enough to satisfy your appetite, porkulus.