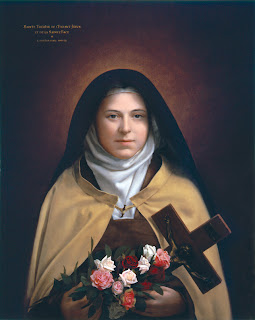 Some time ago I posted an entry on a new painting of the Little Flower by our friend Leonard Porter.

Porter is at the forefront of the renewal of classical painting, and his image of Therese has garnered a lot of attention for its combination of Western naturalism and the transcendence of the Eastern tradition.

So many people have been asking about the possibility of ordering a print that Leonard has made signed high-quality 11"x14" prints available on eBay by clicking here. Help support high quality sacred art!

Denis McNamara of the Liturgical Institute says: "The reason this painting should be studied carefully is the expression of the saint herself. This is not the china-doll porcelain face of sentimental nineteenth-century holy cards. This is the look of one who contemplates the face of God. The gaze of the painting is not at the viewer, but beyond the viewer. Though we recognize her from her photographs, this is not a portrait but an icon in Western, three-dimensional style: perfected, divinized, with just enough of a "dry" gaze to know that her perceptions are not of the things of this world even as she has a hint of a smile. Masterful work indeed."

“St. Therese, the Little Flower, please pick me a rose from the heavenly garden and send it to me with a message of love. Ask God to grant me the favor I thee implore and tell him I will love him each day more and more. “

(judging from your freeper name and tagline, it seems you are a fan of classic cartoons. Modern day society has robbed us of these timeles masterpieces. I'm planning to build a personal collection. Any suggestions on one "must have" DVD?)

I have that prayer taped to the top edge of my computer and say it regularly.

I’m a true believer in the Saints:

BACKGROUND
There is an electrolyte imbalance called hyponatremia; literally meaning ” low sodium.” What happens when there is too much water and too little sodium is that the body puts out antidiuretic hormone to conserve the sodium (it stops you from peeing) and the water builds up, causing improper water storage; early symptoms can be swelling of the hand/face. More, brain swelling, confusion…more loss of consciousness…more, coma then congestive heart failure and death.

In retrospect I’ve had four noticeable brushers with it; three running related and one SSRI related (selective serotonin reuptake inhibitor). I realized that I had been experiencing hyponatremic problems in August 2000 and did a zillion web searches on the subject and rapidly become very knowledgeable on the subject and have taught lots of people and helped lots of people. Here’s and example from the Runners World Marathon Forum….Oh, my nickname/username is Daffy Duck:

Thanks Daffy!! Aug 15, 2001 1:44 AM
Running Mommy
I just wanted to thank Daffy for e-mailing me some really helpful info on Hyponatremia.
I volunteered for a local Tri (full Ironman distance) this past weekend and had to put his knowledge to work. Due to the lack of on course medical support I had to go scrape a guy off the side of the road in my own car. I was able to tell the doctor at the finish line (via cell phone) that I suspected hyponatremia- and why. The doctor asked if I was a medical professional!! HA !! “Uh no, I’m the gatorade girl at run station 5” !! I was also able to explain the condition to his friend who was riding alongside him, and tell them what was going to happen (most likely) at the medical tent.

His friend came back later to thank me and tell me that I had it exactly right- down to the IV bag!!

So Thanks Daffy, and everyone else who has given me great advice over the last year or so. I’ve gleaned such great knoweldge from so many of you, that you think I would be a better runner!

In fact in going through old paperwork the other day I pulled out a copy of Jim2’s fall marathon advice. A classic we ask for every year!
Happy trails.
denise :>
http://rwforums.rodale.com/thread.jsp?forum=4&thread=10591&message=76557&redirect=true&hilite=true&q=Thanks+Daffy

In early September 2000 a lady named Trayce Shaw posted on the runners world forums that she was having lower abdominal swelling, that her weight was fluctuating 10 pounds during a day…that her clothes didn’t fit. She was training marathon and teaching aerobics 3x a week.

I posted back and asked if she was getting enough salt, taking any anti-inflamitories or SSRI’s. (FYI you loose approx. 1.5gr of salt per pint of sweat.)

She posted back that she doesn’t eat much salt because of a previously corrected heart defect, that she only used a salt substitute and was taking Allieve.

I post back in detail about hyponatremia (except that it can be fatal, I didn’t want to spook her) and start coaxing to see her Doc. We traded a half a dozen posts back and forth, including ones noting she had dizziness on long runs and having collapsed during aerobics.

October 1, 2000
From Trayce, to Alec:
Hey Alec! I don’t know if you remember me, but I left a message on the boards a few weeks ago regarding the incredible amount of water I was losing in the first hour of my long runs and the abdominal swelling that would occur as well.

I just thought I’d let you know that I haven’t had any ‘more’ problems. I started using real salt half of the time instead of salt substitute all the time….

The abdominal swelling is still present, but not as bad, and I am seeing a doctor about it tomorrow. Over the phone (although hesitant to say anything without seeing me) the doctor seem to think it might be related to my kidneys…..

[I email back ‘good luck’ etc….but I don’t hear back from her about her doc visit]

November 1, 2000
From Alec, to Tracy:
Hey Tracye! For an odd reason (long story) your name popped into my mind earlier today…

Did you run your marathon?
Hope all is well.

Hi! No. Actually, I run this weekend on Sunday. Things have gone very well lately. The weird water retention is gone. I eat a regular salt diet and take no ibuprofen. It took a few weeks, but it finally went down. I also found out that I had a latent heart condition that was exacerbating all my symptoms, and will have corrective surgery for that in a couple of weeks. So, all is well that ends well.

Did you run you marathon?

Cool! Glad everything is getting better. Good Luck with your race.

I have to tell you the odd reason that prompted me to email you…it is “All Saints Day” and Water/Salt related…odd story.

Wednesday was All Saints Day, a Holy Day of obligation for Catholics and yesterday morning I was thinking about going to Mass and also my 13 year-old who will be confirmed this spring and he is supposed to be working on his confirmation Saint. Report…which he hasn’t been doing. I never had to

do one of those reports…I only went through confirmation 5 years ago (long story).

My grandfather’s name was Alexander, his nickname Alec, whom I’m named after and for my confirmation name I picked Alexander...but I never
looked up who St Alexander was until yesterday morning: Pope St. Alexander I ….. “He is also said to have introduced the use of blessing water mixed with salt for the purification of Christian homes from evil influences” http://www.newadvent.org/cathen/01285c.htm

Salt? Water? And me who’s only recently discovered that I’ve had salt/water problems and who is preach the importance of salt/water balance? Odd coincidence! That’s when you popped into my head, I was curious how the trip to the doc went. Glad it worked out.

November 2, 2000
From Tracye, to Alec:
That’s really funny because I, too, am Catholic and raised Catholic (although I was only confirmed 4 years ago) and so is the doctor treating me. Apparently he had the same thought because he also sent me the story of St Alexander. His first name is Alexander, too……

…My confirmation name is Rose.

I was quite surprised to see this in the movie when watching it about 8 years ago...

In the vile film, “The Cider House Rules”, an orphaned baby who has been badly abused by an adopting couple is retrieved by the loving head of the orphanage whom is also an abortionist. Prominently shown over the crying baby’s crib is a picture of the Little Flower. I still can’t stomach anyone involved with that movie — even Michael Caine who I once admired.

In itself this a beautiful work of art but it’s not St. Therese’ face