On Clement of Alexandria

"One of the Great Promoters of Dialogue Between Faith and Reason"

VATICAN CITY, APRIL 18, 2007 (Zenit.org).- Here is a translation of the address Benedict XVI delivered today at the general audience in St. Peter's Square. The reflection focused on St. Clement of Alexandria.

After a time of holidays, we return to our normal catechesis, despite the fact that the square is still visibly decorated for the feasts. With these catecheses, we return, as I said, to the theme previously begun. We have spoken about the Twelve Apostles, then the disciples of the apostles, and now we turn to the great personalities of the nascent Church, of the ancient Church.

Last time, we had spoken about St. Irenaeus of Lyons and today we will speak of Clement of Alexandria, a great theologian who was probably born in Athens, sometime around the turn of the second century. In Athens, he picked up a keen interest in philosophy that would make him one of the great promoters of dialogue between faith and reason in the Christian tradition.

While still a youth, he moved to Alexandria, the "symbolic city" of this fruitful nexus between cultures which characterized the Hellenistic age. He was a disciple of Pantaenus and even succeeded him in directing the catechetical school. Numerous sources say he was ordained a priest. During the persecution from 202-203, he fled Alexandria and took refuge in Caesarea, in Cappadocia, where he died in the year 215.

The most important of his works which still exist are the "Exhortation," the "Instructor" and the "Stromata." Although it seems that it was not the author's original intention, these works make for a real trilogy, adequate for efficiently accompanying the spiritual maturation of a Christian.

"The Exhortation," as the title itself implies, exhorts one who is beginning and searching for the path of faith. Moreover, "The Exhortation" coincides with a person: the Son of God, Jesus Christ, who is an "exhorter" of those who decidedly begin the journey toward Truth.

Christ himself later becomes the "educator," that is, the "instructor" of those who, by virtue of baptism, have become sons and daughters of God. Christ himself, finally, is also "Didascalo," that is, the "Teacher," who proposes the deepest teachings. These are collected in Clement's third work, "The Stromata," a Greek word meaning "miscellanies." It is a composition that is not systematic, but rather deals with various arguments, and is the direct fruit of the ordinary teaching of Clement.

Taken together, Clement's catecheses accompany the catechumen and the baptized step by step, because, with the two "wings" of faith and reason, they lead to knowing the Truth, which is Christ, the Word of God. "Authentic gnosis" -- the Greek expression which means "knowledge" or "intelligence" -- can only be found in knowing the person of the truth. This is the edifice built by reason under the impulse of the supernatural principle. Therefore, the authentic "gnosis" is a development of the faith, drawn forth by Christ in the souls of those united to him. Clement later defines two levels of Christian life.

The first level: believing Christians who live the faith in an ordinary way, although with their horizons always open toward sanctity. The second level: the "gnostics," that is, those who lead a life of spiritual perfection. In any case, the Christian has to begin with the common base of the faith and by way of a path of searching, he should allow himself to be led by Christ and thus arrive to the knowledge of the Truth and the truths that make up the content of the faith.

This knowledge, Clement tells us, becomes for the soul a lived reality: It is not just a theory. Rather, it is a life force, a union with a transforming love. The knowledge of Christ is not just a thought, but a love that opens the eyes, transforms the person and creates communion with the "Logos," the divine Word that is truth and life. In this communion, which is the perfect knowledge and is love, the perfect Christian reaches contemplation and union with God.

Clement finally takes up doctrine, according to which the final end of the person consists in being like God. We have been created in the image and likeness of God, but this is also a challenge, a journey; in fact, the objective of life, the final destiny of the person consists in making himself like God. This is possible thanks to a connaturality with him, which the person has received at the moment of his creation, by which he is already the image of God. This connaturality enables him to know divine realities to which the person adheres above all by faith, and through the living of the faith, the practice of the virtues, can grow until he reaches the contemplation of God.

In this way, on the journey to perfection, Clement gives the same importance to moral requirements as to the intellectual ones. The two go together because it is not possible to know the truth without living it, nor to live the truth without knowing it. It is not possible to make oneself like God and contemplate him simply with a rational knowledge: In order to achieve this objective, it is necessary to live according to the "Logos," a life according to truth. And, therefore, good works have to accompany intellectual knowledge, as the shadow accompanies the body.

There are two virtues which particularly adorn the soul of the "authentic gnostic." The first is freedom from passions ("apátheia"); the second is love, the true passion, which ensures intimate union with God. Love gives perfect peace, and enables the "authentic gnostic" to confront the greatest sacrifices, including the supreme sacrifice in the following of Christ, and brings him to rise to the level of living virtue. In this way, the ethical ideal of ancient philosophy, that is, the freedom from passions, is redefined by Clement and complemented by love, in the unending process which leads to being like God.

In this way, the thinker from Alexandria fosters the second great opportunity for dialogue between the Christian message and Greek philosophy. We know that St. Paul, in the Areopagus in Athens, where Clement was born, had made the first attempt at dialogue with Greek philosophy and for the most part, had failed, given that his listeners said, "We will listen to you at another time." Now Clement, takes up again this dialogue, and supremely ennobles it in the tradition of Greek philosophy.

As my venerable predecessor, John Paul II, wrote in his encyclical "Fides et Ratio," Clement of Alexandria arrived to an interpretation of philosophy as "instruction which prepared for Christian faith" (No. 38). And, in fact, Clement even affirmed that God had given philosophy to the Greeks "as their own Testament" ("Stromata," 6, 8, 67, 1).

For him, the tradition of Greek philosophy, almost like the Law for the Jews, is the context for "revelation." They are two currents that definitively direct toward the very "Logos." Clement decisively continues along the path of those who want to "give reason" for their faith in Jesus Christ.

He can serve as an example for Christians, for catechists and theologians of our time, who John Paul II exhorted in that same encyclical to "recover and express to the full the metaphysical dimension of truth in order to enter into a demanding critical dialogue with […] contemporary philosophical thought."

We conclude with one of the expressions from the famous "Prayer to Christ, 'Logos'" with which Clement concludes the "Instructor." His prayer reads: "Show favor to your children … grant us to live in peace, to arrive to your city, pass through the currents of sin without sinking into them, be transported with serenity by the Holy Spirit, by ineffable Wisdom: we, who by day and by night, until the last day, raise to you a hymn of thanksgiving to the one Father … the Son, Instructor and Teacher, together with the Holy Spirit, Amen!" ("Instructor," 3, 12, 101).

[After the audience, the Pope greeted the people in several languages. In English, he said:]

In our catechesis on the Fathers and teachers of the early Church, we now turn to Saint Clement of Alexandria. As head of the catechetical school of Alexandria, Clement promoted a fruitful encounter between the Gospel and the Greek philosophical tradition. For Clement, faith in Christ grants the true knowledge which the ancient philosophers had sought through the use of reason. Faith and reason thus appear as two necessary and complementary “wings” by which the human spirit comes to the knowledge of Christ, the Word of God. Faith itself, as a divine gift, inspires a search for a deeper understanding of God’s revelation. As creatures made in God’s image, we are called to become ever more like him not only through the perfection of our intellect, but also through our growth in the virtues. Freed from our passions, we are drawn to contemplate in love the God who has revealed himself in Christ. By his life and teaching, Clement can serve as a model for all Christians who seek to give an account of their hope (cf. 1 Pet 3:15), and especially for catechists and theologians as they strive to articulate the Christian faith in a disciplined dialogue with the great philosophical tradition.

* * * I greet all the English-speaking visitors and pilgrims present at today’s Audience, including groups from Britain and Ireland, Gibraltar, Scandinavia, Asia and North America. I extend a special welcome to the ecumenical visitors from Finland and to the many students and teachers present. Upon all of you I invoke the abundant blessings of this Easter season, and I pray that your visit to Rome will bring you closer to Christ our Risen Lord. May God bless you all!

Pope Benedict XVI (2nd R) is presented with a giant cake before his weekly general audience at the Vatican April 18, 2007. The pontiff celebrated his 80th birthday on April 16, and celebrates his second year of pontificate on April 19, 2007. REUTERS/Osservatore Romano (VATICAN)

Pope Benedict XVI (R) greets a group of German horn musicians from Bayern as he arrives in his car to lead his weekly general audience in Saint Peter's square at the Vatican April 18, 2007. REUTERS/Dario Pignatelli (VATICAN)
1 posted on 04/18/2007 7:25:58 PM PDT by ELS
[ Post Reply | Private Reply | View Replies]
To: All
There will be a special program on EWTN tomorrow (Thursday).

Please let me know if you want to be on or off this list.

A Day in the Life of Benedict XVI - a delightful video, about 16 minutes long (40 MB), of a "typical day" at the Vatican for the Pope - the narration is in Italian, but the visuals communicate a lot even if you don't understand Italian.

You can watch other videos at this Web site.

4 posted on 04/18/2007 7:35:31 PM PDT by ELS (Vivat Benedictus XVI!)
[ Post Reply | Private Reply | To 2 | View Replies]
To: ELS
In this way, the thinker from Alexandria fosters the second great opportunity for dialogue between the Christian message and Greek philosophy.

This is about 180 degrees from what Paul the Apostle teaches...

Col 2:8 Beware lest any man spoil you through philosophy and vain deceit, after the tradition of men, after the rudiments of the world, and not after Christ.

Last time, we had spoken about St. Irenaeus of Lyons and today we will speak of Clement of Alexandria, a great theologian who was probably born in Athens, sometime around the turn of the second century. In Athens, he picked up a keen interest in philosophy that would make him one of the great promoters of dialogue between faith and reason in the Christian tradition.

Act 6:9 Then there arose certain of the synagogue, which is called the synagogue of the Libertines, and Cyrenians, and Alexandrians, and of them of Cilicia and of Asia, disputing with Stephen. 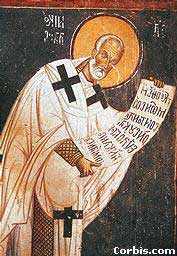