According to Canon Charles Winfred Douglas, The American Missal of the 1930s was produced to counter some tendencies in The English Missal and The Anglican Missal that were distinctly Roman and peculiar to the modern Roman Church. However, as is readily evident to the most casual observer, all Missals currently in use in the continuing Anglican Churches include those elements that many churchmen continue to find odd at the least and theologically prohibitive at the worst. What I think is needed by those that utilize any of the Missals is a revisiting of the same issues that concerned Canon Douglas, so that a truly "Anglican Missal" might be brought forth for use in the classical Anglican Churches that desire it. His essay and arguments, thankfully preserved by Project Canterbury, are reproduced below for your consideration.

Why the American Missal was Produced 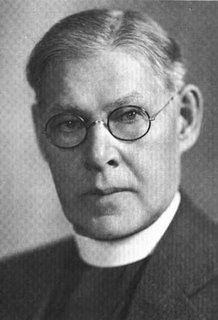 Obviously, the missal of the Protestant Episcopal Church is contained in the Book of Common Prayer; and no other rite possesses any authority save by Episcopal license. Nevertheless, missals containing supplementary devotions have been widely used among us for the past sixty years. About that time, an English book, Divine Service, began to be found on American altars. Later editions of this book bore the imprint of an American publisher. This work had many successors. Half a dozen of them are on my shelves. They all had the serious fault of being adapted to the English Prayer Book, not to our own. This fact led me, in association with the late Rev. Maurice W. Britton, to undertake in 1911 the preparation of an Altar Missal, to have been called The Saint Dunstan Missal. In 1913 the first section of this work, the "Ordinary and Canon of the Mass," was admirably printed by D. B. Updike at the Merrymount Press, and published by the H. W. Gray Company. It aroused no comment other than a few favorable reviews. It has been widely in use ever since, some 700 copies having been sold. But the General Convention of 1913 initiated the long process of Prayer Book revision; and further work on the missal was necessarily postponed until the conclusion of that task.


Meanwhile, two new foreign publications found their way to American altars, The English Missal and The Anglican Missal. The latter claimed to contain the American rite, but did so only in garbled and imperfect form. Both books were frankly Roman; rearranging the order of the Eucharist more Romano, interpolating the Canon of the Roman Mass before the Prayer of Consecration, and adopting the modern Roman Calendar even to such Feasts as those of the Immaculate Conception of the Blessed Virgin, and of Saint Peter's Chair at Rome.


To many of us these books seemed alien in manner, inadequate in preparation, and disloyal not only to our formularies, but to our whole morale as a church. Therefore when, before I could resume my own old plan, I was asked by Bishop Ivins to participate in the preparation of an altar service book not open to these grave objections, I regarded it as not only a personal privilege, but a religious duty as well, to accede at his request: and I am proud and happy to have shared with him and with his fellow-editors the labor and responsibility of preparing The American Missal. For a work undertaken through motives of utter loyalty, it has had its share of denunciation, often quite uninformed, from critics whose voices were never publicly heard in condemnation of the disloyal books which it has almost universally replaced. My honored and beloved friend, the Bishop of Colorado, told us last year that the crowning objection to the Roman system was not so much its doctrine in the main, but its rigid regimentation, which dictates every minutest detail of belief, conduct, rite, and ceremony. Some of our brethren and Fathers in God appear to be swayed for the moment by that Romanensian rigidity; against which, as against every attack on the liberty wherewith Christ hath set us free, I remain completely Protestant. But this is too solemn a matter of controversial dealing. It is a matter of man's most sacred prayer; which he cannot pray, whatever book he uses, without the Holy Spirit. We cannot quarrel about a work in which we seek to be led by the Holy Spirit of God: we can only, with complete mutual respect, lovingly try to understand one another.


Now why do some of us feel the need of a book containing devotions supplementary to the Book of Common Prayer?


Probably every priest and bishop says private prayers of some kind before, during, and after the Eucharistic celebration. Our private prayers are not prescribed by bishop or by convention; they remain completely free. Hundreds of us, in the exercise of this lawful freedom, prefer to utter prayers sanctified by ages of use in God's church, rather than our own improvisations. They are printed for the convenience of the priest who desires to say them; and they are the proper concern of no other person whatever, save possibly a lay server at his side. From among these devotions, our Prayer Book has recently been enriched by the beautiful Collect for the Unity of the Church.


The Introits, Graduals, Alleluia Responds, Tracts, Offertories, and Communions, taken from Scripture; and the Sequences, taken from the Hymnal, are of course definitely provided for in the Prayer Book in the precise places where they occur. They make up the devotional treasure of the choir, which from very early Christian times adorned the Eucharist with God-inspired words rather than with later and less worthy hymns.


In another category are the additional services for an enlarged calendar. They are supplementary to the Prayer Book, as are the similar services in the Book of Offices set forth by the House of Bishops. For the use of either, the consent, at least tacit, of the diocesan, is required. But may I point out that this calendar is a composite of those approved by the bishops visitors of the various religious orders working in our church? The priests whose devotional leadership is sought in our retreats, our parochial missions, our summer conferences, our schools of the prophets, our college of preachers, are largely those who daily use this calendar. The tree is known by its fruits: and the good tree of devout commemoration of God's Saints in every age is yielding the good fruit of saintly lives in our age. Who wishes to deny the religious and their associates the benefit of daily devotion?


The special observances of Holy Week and of some other days, when they are not wholly drawn from Bible and Prayer Book, are of course "subject to the direction of the ordinary." This means that they are to be treated precisely as the popular devotion of the Three Hour Service on Good Friday.


Apart from their practical value to those who devoutly and wisely use them, such books as The American Missal have a larger significance and importance. Their wide use is a bond of relationship with churches both Protestant and Catholic toward which we have mode overtures of sympathetic approach with a view to eventual intercommunion. Many of us are unaware that great numbers of our Protestant brethren have gone far beyond us in the matter of historical liturgical enrichment. I have before me several recently published Protestant service books, each of which contains much of the material characterizing a missal. One of them, by no means the most Catholic in tone, contains Tenebrae, the Reproaches, the Adoration of the Cross, the private prayers which have been objected to in The American Missal, Proper Prefaces for Lent, Passiontide, Corpus Christi, and Feasts of Apostles; and other similar devotions. The missal of the Old Catholics, with whom we seem on the verge of intercommunion, is precisely similar, in its faithfulness to what is Catholic and its rejection of what is merely Roman, to The American Missal. The Orthodox, with whom we already have economic intercommunion, are accustomed to greater liturgical richness than that of our official books. Perhaps The American Missal will prove to be an agency blessed by God in bringing us to that wider outlook and larger responsibility for Christian unity so convincingly urged by the Lambeth Conference.

TOPICS: Mainline Protestant
KEYWORDS:
[I confess being dubious about this, myself. "Hundreds of us, in the exercise of this lawful freedom, prefer to utter prayers sanctified by ages of use in God's church, rather than our own improvisations." I'd prefer to say "refined" instead of "sanctified", but otherwise the argument reflects basic Anglican tendencies -- how else could it be, growing up with Cranmer's masterful work?

But for all that (I am told) the Anglican Missal is commonly used in our province, ours has always been a strictly 1928 BCP church, and I pray it remains such.

I pray it remains such, also. Having been indoctrinated by the Roman Catholic nuns in the convent school I attended as a child, I had a lot to do to overcome the longlasting effects of their missal and catechism.

3 posted on 12/27/2006 9:03:23 PM PST by LibreOuMort (Give me liberty, or give me death! (Patrick Henry))
[ Post Reply | Private Reply | To 1 | View Replies]
To: sionnsar
Some of our brethren and Fathers in God appear to be swayed for the moment by that Romanensian rigidity

LOLOL...Romanensian??? That's even better than "Romish"!

One of the English Reformation's lesser-known doctrines: the formation of adjectives referring to the city of Romulus were declared a matter of individual conscience. ;)