We, the undersigned bishops, have met together at Camp Allen in the Diocese of Texas from September 19-22. We understand ourselves to be catholic bishops within the Anglican Communion and have met to contribute to our future life within this Communion. We are writing to you as fellow bishops in The Episcopal Church, in the knowledge that many others in our Province and around the world have expressed an interest in this meeting.

We have gathered with a common desire to work for the unity of the Church, as well as for the integrity and vitality of our own Province and the Anglican Communion as a whole.

We are grateful for the helpful briefing from the Archbishop of Canterbury, brought to us through the Bishops of Durham and Winchester. We have corresponded in turn with the Archbishop and communicated our hopes with respect to continuing in full constituent Communion membership. It is our intention to offer a faithful and dynamic witness within the Episcopal Church.

We confess our faith in Jesus Christ as the Way, the Truth and the Life – the faith that is uniquely revealed in the Holy Scriptures, set forth in the catholic Creeds, and to which the historic Anglican formularies bear witness.

We are committed to the conciliar character of our Communion. Consistent with the Archbishop of Canterbury’s Holy Cross Day letter to the Primates, it is our clear sense that General Convention of 2006 did not adequately respond to the request made of The Episcopal Church by the Communion through the Windsor Report and the Primates at Dromantine. These requests include explicit moratoria regarding church discipline and order. We express our regret, on behalf of ourselves, for those actions with which the Windsor Report was concerned.

We accept and affirm the Windsor Report and view adherence to it as furthering the vocation to heal the breaches within our own Communion and in our ecumenical relationships. Furthermore, we endorse the recommendation of the Windsor Report, as supported by the Archbishop of Canterbury, for the development of an Anglican Covenant.

The Windsor Report properly belongs within the larger framework of Anglican teaching, as expressed, not least, in successive Lambeth Conferences, including the resolutions of Lambeth 1998 (among which is Resolution 1.10). We understand this to be the mind of the Communion for teaching and discipline.

We recognize that many congregations within The Episcopal Church need a safe space within which to live out the integrity of their faith in compliance with the Windsor Report. We also recognize that there are some congregations that do not accept the provisions of the Windsor Report. We pledge ourselves to work with our Episcopal colleagues to care for all God’s people in our dioceses.

Within our group are needs for various levels of response to the conflicts in the church. While here we have worked diligently to achieve unity across these lines. We recognize the need of some among us for an alternative primatial relationship. This recognition does not weaken our fundamental theological and ecclesial commitments. Rather, our unity has strengthened them, and for this we thank God.

It is our hope and prayer that through our fellowship we can contribute to the renewal of our Province’s life within the Communion. We invite others who share our concern and position to join us in our common work on behalf of the church, and we plan to meet again early in the new year. We hope that those of you who share our commitments will find yourselves able to join us then, as we continue our work.

Matt Kennedy thinks this letter is an unmitigated disaster.

Compare this key section from the 2005 letter in which the assembled bishops affirm Lambeth 1.10 and 2. boldly state that the differences between Windsor bishops and the rest of the church are irreconcilable:

As bishops, we take with utmost seriousness the vows made at our consecration. We consider it a sacred responsibility “to guard the faith, unity, and discipline of the Church.” Those within ECUSA who continue to act in opposition to the normative teachings of the Anglican Communion, expressed in resolution 1.10 of the 1998 Lambeth conference, the Windsor Report, and the , make healing and reconciliation within ECUSA and thePrimates’ Communique communion all the more difficult.

At the recent meeting of our House of Bishops, several of us spoke with Bishop Griswold concerning what we believe to be “irreconcilable differences” in the life of our Church. His response was to note the language of “irreconcilable differences” is “faithless.” We believe, however, it is precisely contradictory, mutually exclusive positions regarding essential matters of faith and practice dividing our Church and threatening the unity and mission of the Anglican Communion. The report of the Theology Committee of the House of Bishops, made prior to the General Convention 2003, noted there exists within our Church mutually exclusive theological positions on the matter of homosexual practice. This has not changed and has become even more apparent over these past 18 months.

With this section from the Camp Allen Statement in which the assembled bishops:

1. affirm the Windsor Report and Lambeth 1.10

2. a) drop the “irreconcilable differences” language in favor of “recognizing” that both compliant and non-compliant parishes need a “safe place” and that “some” dioceses need APO, and b) step back from any suggestion that they, as a group, want or need an alternative ecclesial structure c) pledge to work within the structures of the Episcopal Church with their Episcopal “colleagues”

The Windsor Report properly belongs within the larger framework of Anglican teaching, as expressed, not least, in successive Lambeth Conferences, including the resolutions of Lambeth 1998 (among which is Resolution 1.10). We understand this to be the mind of the Communion for teaching and discipline.

We recognize that many congregations within The Episcopal Church need a safe space within which to live out the integrity of their faith in compliance with the Windsor Report. We also recognize that there are some congregations that do not accept the provisions of the Windsor Report. We pledge ourselves to work with our Episcopal colleagues to care for all God’s people in our dioceses.

Within our group are needs for various levels of response to the conflicts in the church. While here we have worked diligently to achieve unity across these lines. We recognize the need of some among us for an alternative primatial relationship. This recognition does not weaken our fundamental theological and ecclesial commitments. Rather, our unity has strengthened them, and for this we thank God.”

Stand Firm has learned that the Kigali Communiqué was in fact circulated at the Camp Allen meeting prior to the release of Camp Allen Statement.

That means that the bishops there knew very well what sort of structure the primates were willing to promote and establish. They knew it and they rejected it. Instead they proposed to:

“work with our Episcopal colleagues to care for all God’s people in our dioceses.”

The Camp Allen bishops, together, stepped back from any suggestion that such a structure is necessary and in so doing they both damaged the cause of orthodoxy in North America and weakened the position of their Global South allies prior to the meeting of the primates in February.

So why did the Network bishops sign it?  Captain Yips thinks the Network is hunting for bigger game.

Let’s be clear: the institutional ECUSA/TEC is the Titanic; it’s going to sink, and that’s inevitable now. But there are a lot of people who aren’t in lifeboats, and running around screaming won’t get the passengers into the boats. The great danger all along has been that too rapid action would only lead to another small Continuing Church, probably out of communion with Canterbury, probably mostly regional, and barely sustainable. +Duncan and the Network are aiming higher, and that means slower action taken in consultation with overseas partners and with the Archbishop of Canterbury. The next step, which will require a lot of negotiation among the Windsor Bishops, will be to put forward an alternative representative for the February Primates Meeting; there’ll be a whole lot of phone calls between bishops, and probably at least one more meeting before they do that.

Anguished North American Anglicans (ANAA - I may as well add to the alphabet soup) - of whom I’m one - must be patient. ECUSA has been getting sick for 50 years or so. It won’t get well overnight. A lot has been done in three years, and a lot remains to be done.

I might be inclined to agree except for one thing.  The tone of the Kigali communinque does not suggest that patience is a virtue:

a. We have asked the Global South Steering Committee to meet with the leadership of the dioceses requesting Alternative Primatial Oversight, in consultation with the Archbishop of Canterbury, the Network and the ‘Windsor Dioceses’, to investigate their appeal in greater detail and to develop a proposal identifying the ways by which the requested Primatial oversight can be adequately provided.

b. At the next meeting of the Primates in February 2007 some of us will not be able to recognize Katharine Jefferts Schori as a Primate at the table with us. Others will be in impaired communion with her as a representative of The Episcopal Church. Since she cannot represent those dioceses and congregations who are abiding by the teaching of the Communion we propose that another bishop, chosen by these dioceses, be present at the meeting so that we might listen to their voices during our deliberations.

c. We are convinced that the time has now come to take initial steps towards the formation of what will be recognized as a separate ecclesiastical structure of the Anglican Communion in the USA. We have asked the Global South Steering Committee to develop such a proposal in consultation with the appropriate instruments of unity of the Communion. We understand the serious implications of this determination. We believe that we would be failing in our apostolic witness if we do not make this provision for those who hold firmly to a commitment to historic Anglican faith.

Put simply, orthodox Anglicanism in the United States is just about out of time and the Global South realizes it.  And I think they will see the idea of negotiations about who will go to the February Primates Meeting as precisely what they are.  More stalling.  Because to suggest that the Network and Windsor bishops will be able to agree on a compromise representative for the Primates Meeting which would be agreeable to the orthodox primates and to ECUSA is the very definition of a pipe dream.

And it's not like the Windsor bishops(and the Network bishops, for that matter, since they signed their names to this thing) are in a great negotiating position vis-a-vis the Global South.  All they have done so far is to sign their names to a statement which takes off the table precisely what the Global South(and anyone else who can see) says needs to be done.

We will no doubt be told that there is much more going on behind the scenes than is being let on.  One hopes so anyway.  Because Peter Akinola et al won't wait forever.  There are going to have to be definite steps taken in precisely the direction the Camp Allen statement refuses to go.  And these steps are going to have to come quickly.  Because the Network's chances are just about gone.

Maybe they are just a bunch of ents? Let's not be hasty...

Being Anglican is to exhibit certain entish behaviour... 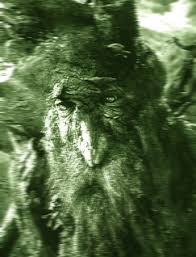