The Passion of Spain - Never forget

"Naturally, I was not in favour of the Communists. How could I be, when if I had been a Spaniard they would have murdered me and my family and friends?"


Yes, a Protestant Briton, who really knew what a "Fine hour" was, better understood the murderous forces involved in the Spanish Civil War than many a Catholic in our days!

So that Catholics may never forget the terrible persecutions faced by our brethren in those harsh Spanish days of the last six months of 1936, one is bound to remember the names of the bishops which, by this day 70 years ago, had already been murdered by the Republican forces in barely one month of suffering:

-July 27, 1936: Eustaquio Nieto y Martín, Bishop of Sigüenza. Shot dead by Republican militiamen (who had kidnapped him from the Episcopal Seminary) in the road to Estriénaga.

-August 8, 1936: Salvio Huix Miralpeix, Bishop of Lérida. Taken by the Republican commitee of Lerida, with 21 other men, to the local Cemetery, Don Salvio Huix asked to be the last one to be executed. After blessing the other victims, he was shot and buried.

-August 9, 1936: Cruz Laplana y Laguna, Bishop of Cuenca. Taken hostage by some Cuenca Socialist activists, he was shot after being taken out of the bus in which he was being transported, in the fifth kilometer of the road from Cuenca to Villar de Olalla. His last recorded words were: "I know you will kill me, but if my life is necessary, I offer it for Spain ... Do you believe that there is no Heaven? There is a Heaven, my sons! Do you believe that there is no hell? There is a hell, my sons! ... You may kill me: I leave you my body, but my soul will go to Heaven ... I forgive you and in Heaven I will pray for you." His secretary, Father Fernando Español, was killed with him. The body of the bishop was brutally disfigured after his execution.

-August 9, 1936: Florentino Asensio Barroso, Bishop of Barbastro. The bishop was executed near the road to Sariñena, on the outside wall of a chapel. A line of other unwanted men was executed by the Republican militia at the same spot.

-August 12, 1936: Manuel Basulto y Jiménez, Bishop of Jaén. He was executed by Red forces together with his sister, Teresa, his faithful assistant for many years. Before being executed, Don Manuel Basulto fell on his knees and said, "Forgive, o Lord, my sins, and also forgive my murderers". His sister yelled, "This is infamous! I am a poor woman!". "Do not worry", the militia leader told her, "a woman shall kill you".

-August 12, 1936: Manuel Borrás Ferré, Auxiliary Bishop of Tarragona. After many days in jail and after he had been separated from Cardinal Vidal y Barraquer, Archbishop of Tarragona, who managed to escape the country, he was "convicted" by a "People's court". On August 12, Don Manuel Borrás was taken in a truck to the place of his execution, near the town of Coll de Lilla. After killing the holy man, the Reds covered his body with some wood and set it on fire.

-August 22, 1936: Narciso de Esténaga y Echevarría, Bishop (Prelate) of Ciudad Real. Don Narciso de Esténaga was arrested by Republican forces in the morning of August 22, with his faithful secretary, Father Julio Melgar. Details of their execution are unknown, but their bodies were found in the afternoon of the same day, by the river Guadiana, near the town of Peralvillo del Monte.

Before the end of the month, two other bishops would be murdered, as we shall see next week. Through the example of these episcopal martyrs, we pay homage to the thousands of priests and laymen martyred in Spain in the months of July and August of 1936. 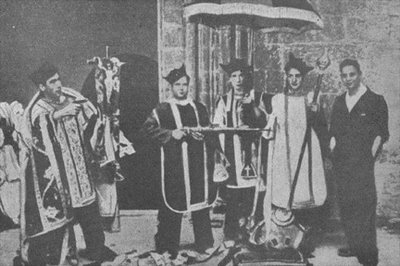 The Forces of Enlightenment and Progress (Spain, 1936): Republican supporters and their sacrilege

7,000 priests and religious murdered by the Communists in Spain. Spanish martyrs pray for us.