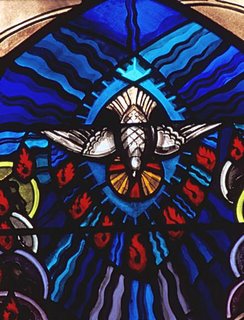 The Articles of Religion of the Church of England

Similar to the manner in which the previous Articles defend the Trinity as well as co-substantiality of the Son with God and with man, this Article affirms the Godhead of the Holy Ghost, thereby combating the heresy of Macedonianism. Macedonious, the Patriarch of Constantinople, taught that the Holy Ghost was a creature and not equal with the Father (much in the same vein that Arius taught that the Son was created).

As Bishop Browne comments, “Those early heretics who denied the Divinity of the Son of God, seem generally to have disbelieved the Personality of the Holy Spirit, and to have looked on Him not as a Person, but as an efficacy, power, or emanation. . .” Hence the firm affirmation in the Articles concerning the Holy Ghost being of the same substance (ousia) with the Father and the Son, thereby reaffirming the full divinity of the Son as well.

Archdeacon Welchman (writing circa 1713) notes that “Since those operations are attributed to the Holy Ghost, which cannot be ascribed but to a person distinct from the Father and the Son, as such as “to make intercession for the saints,” (Rom 8:27) to “come as sent by the Father in the name of Christ,” (John 14:26) to “take what was Christ’s, and show it unto others,” (John 16:14) and since those things are attributed to Him, which cannot be ascribed to any other but God, such as, to have the bodes of the faithful for His temple and even to have the whole Church dedicated by baptism to Him, as well as to the Father, and the Son, it necessarily follows that He is “very and eternal God,” equal with the Father and the Son, and together with them to be adored and invoked.”

In order to combat Macedonianisn (or Pneumatomachi, those who Fight against the Spirit), the clause “And I believe in the Holy Ghost, The Lord and giver of life, Who proceedeth from the Father, Who with the Father and the Son together is worshipped and glorified, Who spake by the Prophets” in the Nicene Creed clearly asserts the divinity of the Holy Ghost and His role in salvation.

As an aside on the western addition of the clause “and from the Son” in the description of the procession of the Holy Ghost, and its remaining unaltered at the time of the English Reformation, it must be noted in charity that many of the divines of that period were unaware that this addition was not part of the original composition of the Creed and further believed the phrase to have Scriptural warrant and in no way contrary to the text of the New Testament (for example, see 1 Peter 1:11: “. . .the Spirit of Christ who was in them had signified when He testified beforehand of the sufferings of Christ and the glory that should follow.”

Early in the last century, before her descent into heterodoxy, the Church of England’s doctrinal commission stated that if discussions of union with the Eastern Churches progressed to full unity, the western addition to the Creed could be properly redacted.

Speak the truth in love. Eph 4:15
2 posted on 08/13/2006 5:13:39 PM PDT by sionnsar (†trad-anglican.faithweb.com† | Iran Azadi | Appeasement=Suicide | Hezbo rockets carry "peaceheads")
[ Post Reply | Private Reply | To 1 | View Replies]
To: sionnsar
“Those early heretics who denied the Divinity of the Son of God, seem generally to have disbelieved the Personality of the Holy Spirit, and to have looked on Him not as a Person, but as an efficacy, power, or emanation.

Just about everyone save christians are ignorant of and specifically deny the continuing presence of the holy spirit.

Wait youre way wrong, my Episcobaalian priestesses tell me the holy spirit is a girl.