Kevin Kallsen was, um... "kind" enough to point out the investiture of Marc Andrus as Bishop of California, where a man who authorized same-sex blessings (Bishop of North Carolina Michael Curry) delivered the homily, a woman who authorized same-sex blessings assisted in the eucharist (none other than PB-Elect Katharine Jefferts Schori), the setting was the cathedral whose dean believes we should "re-imagine" Christianity as Buddhism with vestments (Rev. Alan Jones), and the service included dancing dragons and an interpretive dance piece with Mary Magdalene as the theme.

As Dave Barry might say, I am not making this up.

These people are not Christians 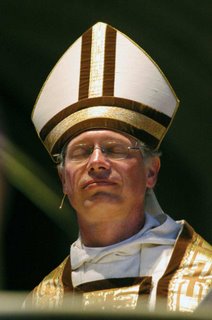 Readers of this blog will remember that the Anglican world was on pins and needles a few months back, wondering if the diocese of California (i.e., San Francisco and its hinterland) would elect as their new bishop any of the gay or lesbian candidates who made their ballot. In the end a straight, if extremely liberal, male candidate won election, the Rt. Rev. Marc Andrus. Now he has been installed, and pictures of the installation have been posted on their web site. I thought I would pass along a few highlights.

My favorite is the big puppet and dancer parade that entered the nave in advance of the clergy procession. These big puppets are now ubiquitous at left-wing political and "social justice" rallies. Its good to see that they have taken up performing at Episcopal liturgies as well. (That was said in jest, of course, my friends. I must admit, however, I rather liked the Chinese dragon. At least the dragon has a long and noble history in Chinese culture behind it, unlike these monstrous puppets!) 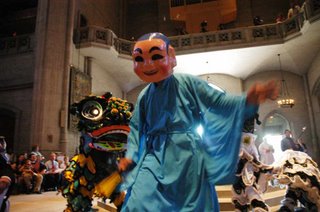 Then, of course, there had to be liturgical dance, since this is a left-wing diocese. I believe this scene before the altar represents St. Mary Magdalene on Easter morning (I'm not sure who the folks in white are--the angels? some of the other women who accompanied St. Mary to the tomb? SS Peter and John?). 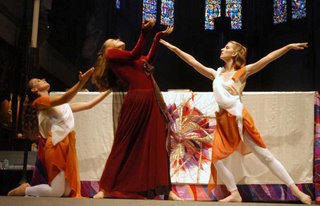 The role of Jesus was danced by David MacCauley. 'Nuf said. 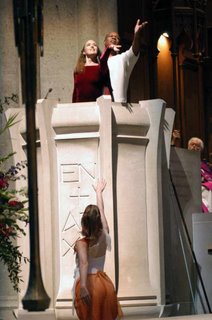 uhh, did the dragon have seven heads and ten horns?

Not according to the pictures...

Wouldn't we all be overjoyed by righting the grievous missteps of the last few years...

But it seems the (new) leadership of TEC/ECUSA is intentionally leading the fellowship away from the Word and into many false and strange doctrines & rituals...

If the faithful cannot present the wayward leadership with the crystal clear choice of sincere repentance.... or immediate resignation...

The time will soon arrive for all who prefer to love and obey Jesus to make the difficult choice -- and make their way into fellowship that remains true to the Word and faithful to the Mission Dei...

Our prayers are with the faithful.. and the prayers of the Faithful and True are joined daily...

well, that's a relief. Still, it would have been pretty cool for St. George to show up and dispatch it.

In the Christian East we have a fair bit of respect for the non-pagan religions of the Far East. The Buddha got a lot of things right (and what he got wrong weren't his own insights, but leftovers from pagan Hinduism he didn't manage to see through), but hesychasm, with the light of the Gospel, surpasses his insights. Taoism did even better (cf. Fr. Damascene's Christ the Eternal Tao). Fr. Seraphim Rose commented that Zen Buddhism (the fusion of the two) was the highest form of philosophy to which man could attain without Divine Revelation.

Still, their 'reimagining' is a huge step backwards--unless they manage to follow Fr. Damascene's path through the non-Christian East to the Christian East. All things are possible with God, but I don't expect to find a pack of repentent liberal Epscopalian clerics following the traditionalists they drove out any time soon, not even after a sojourn as 'Buddhists with vestments'.

On a lighter note, this story brings to mind the old joke about the Anglo-Catholic hold-out, doggedly sticking to his old PECUSA parish, turning to his wife as a statue of the Buddha is carried down the center of the nave, and say, "So help me, one more thing like this, and we're out of here!"

You don't know the half of it. Part of me is really sorry I ever signed up for Arlin's ping list, and through that learning what was going on outside of my comfortable corner of Anglicanism, and eventually taking on this job after his departure.

But it seems the (new) leadership of TEC/ECUSA is intentionally leading the fellowship away from the Word and into many false and strange doctrines & rituals...

Seems? You're being generous, IMHO. There are "pockets" of the faithful in TEC/ECUSA, and rather more isolated faithful in pews outside the "pockets"; so long as I am (or a designated successor is) able to support it the *intent* is to continue this list until such are safely landed (or I run out of resources).

This list is not an advertisement for the APCK (where I reside), nor for Continuing churches in general, nor is it opposed to conversion to the Protestant, Orthodox, or Catholic churches (look before you leap! -- but I've seen fellow churchmembers make surprising conversions, happily.)

I might speak about certain ECUSA dioceses battling TEC dictates... but this will be in days following. I am too tired tonight.

THAT'S the truth here.
You nailed it.

But there's plenty of other lunacy to go around.

"Don't cry for me, Angelinos!"

Desperately misunderstanding the request to pray for the souls in limbo...