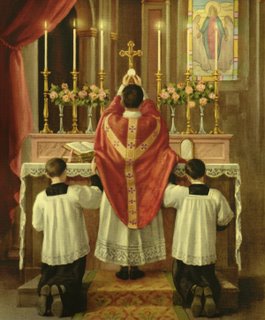 For those who may not have noticed the recent comment by "Christopher+" on this blog a couple of posts back, this well-informed priest notes in it his belief that the present draft of paragraph 7 of the proposed Theological Statement now reads: “We receive the Thirty-Nine Articles of Religion of 1562, taken in their literal and grammatical sense, as the normative expression of the fundamental principles of the Anglican Way, and of its response to particular doctrinal issues controverted at that time.” Christopher+ is typically well-versed in the affairs of traditionalist Anglicans in North America, so I imagine he knows what he is talking about here.

This revision should take care of most of my concerns about the ACN's possible endorsement of the 39 Articles as a disciplinary tool, because reading the 39 Articles in the "literal and grammatical sense" is the Tract 90 way of handling the anti-Catholic articles. And the final words of the revised proposal places the 39 Artilces in their sixteenth century historical context and highlights the fact that they are intended to be read today more for their principles than for the specific issues they addressed "way back when." If the final version reads as Christopher+ predicts, the Theological Statement should not become a club with which to attack Anglo-Catholics. Elevation of the host for veneration during the Eucharist and other traditional acts of Catholic piety should not be endangered. I hope the wiser heads prevail at the meeting next week, and they stand strong for REAL inclusivity of both Evangelicals and Anglo-Catholics within the future orthodox Anglican province. TOPICS: Mainline Protestant
KEYWORDS:
1 posted on 07/23/2006 3:36:48 PM PDT by sionnsar
[ Post Reply | Private Reply | View Replies]
To: ahadams2; secret garden; MountainMenace; SICSEMPERTYRANNUS; kaibabbob; angeliquemb9; ...