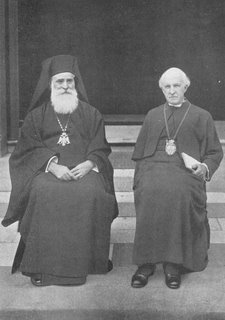 It is the hope of myself and of all who have the unity of the Church of Christ at heart that the agreements already reached may lead to further progress along the road to that full intercommunion between the Church of England and the Orthodox Churches of the East, which is the burden of our prayers and the goal of all our efforts.

-Letter of the Archbishop of Canterbury to the Rumanian Patriarch, 1937

(Pictured, Archbishop Meletios of Alexandria and Arcbishop of Canterbury Cosmo Lang in 1930)
In 1978, after it became clear that churches within the Anglican Communion were “ordaining” women and intent on spreading this untraditional practice, Orthodox Archbishop Athenagoras remarked: “…the theological dialogue [between the Orthodox and the Anglicans] will continue, although now simply as an academic and informative exercise, and no longer as an ecclesial endeavor aiming at the union of the two churches.”(1) Looking back at this, in the context of many theological discussions, what comes as a surprise to many is the fact that the leaders of the worldwide Anglican Communion and the Patriarchs and other chief Bishops of the Orthodox Church had been discussing the prospect of joining into one church at all. It would be an understatement to say that reference to this historical fact often meets with incredulity. Nonetheless, the serious discussion of combining the Orthodox Church and the Anglican Communion of Churches as one Church began in earnest at least as early as 1922. Just how much hope one should have had in that endeavor, either in how practical it was or how long it would have taken in the most promising of circumstances, seems less important than the fact of the effort itself. What does it tell us that for decades the hope of union between Orthodoxy and Anglicanism was pursued, not by well meaning people on the fringes, but by the highest levels of leadership in both communions? And, why did it take only one issue, women’s “ordination,” to bring it to an end, so that only a mere “academic exercise” could remain as a sort of fossil that testifies to this extinct animal?

This process began as Orthodox Patriarchs and other Orthodox Bishops recognized, one by one, the validity of Anglican Orders and sent letters to the Archbishop of Canterbury to that effect. The first came in 1922, from Constantinople (as it is called when referring to the Patriarchate- instead of Istanbul). Soon after in 1923 came letters from Jerusalem, and then from the Archbishop of Cyprus. In 1923 came a letter from the Patriarch of Alexandria. In 1936, the Orthodox Church of Romania sent a letter, also recognizng the validity of Anglican Orders. Thanks to the website Project Canterbury these documents are easilly accessible.

The Orthodox Church has in it many people who are now embarassed, some to the point of denial. How can they accept the fact that their Church, the One True Church, was ever considering real unity with people like the ECUSAns, and their Lesbian priestesses, bishopettes and at least one Ordinary living in a same sex union? Well, the fact is that they were never considering unity with such people. The Anglicans that they were talking with up until 1976, had at that time approved none of these abominations. In fact, the Anglicans were so highly regarded that here, in Amercia, when Orthodox Christians lived very far away from an Orthodox Church, they received special letters from the Orthodox Hierarchy giving them permission to attend the Episcopal Church and to receive the sacraments- including the Holy Communion of Christ's Body and Blood (and so throughout the countries where the Anglican Churches could meet this need). Today, with Orthodox Churches in most major cities and towns, this situation does not exist (Orthodox people who remember this are still alive).

Was this because the Orthodox Patriarchs were a bit thick, and carelesly allowed themselves to be duped by deceitful Anglicans, Protestants in Sheep's clothing? Having too much respect for their diligence and godly character to imagine such a thing, we must believe that they understood what Anglicanism really was. Furthermore, the kind of Anglicans who were at the highest levels of leadership, and who were in direct communication with the Orthodox Church, believed in the same Catholic Faith as we who Continue the Faith of our fathers. The irony is obvious. Thanks to the same heretics who drove us out, into Athanasian style exile, it may be a long time before the Orthodox Church, represented by any of its Patriarchates, will be willing to enter into serious discussions with any Anglicans. But, when the time comes, they ought to talk to us, not to the Canterbury Club.

(In those decades the Church of England had begun an endeavor to seek Reunion with Rome, and to help make their Orders more acceptable to Rome in the hope of that eventual Reunion as a genuine possibility. If true unity could have been acheived, however long it took, think of the implications. No more Great Schism- talk about the Bridge Church was not empty rhetoric. More on that later.)

Ping to an interesting article. I do note that the section which speaks about our hierarchs allowing us to receive communion from Episcopal priests does not go on to relate how +Raphael very quickly, in the first years of the 20th century, withdrew that permission.

Thanks for the ping. Very strange indeed. It's kind of hard to imagine the contemporary ECUSA having much of a dialogue with the Orthodox churches right now.

I'm glad the author made this point, but he doesn't go far enough and badly miseducates his readers. A majority of Anglicans today are under Bishops who do not approve of these abominable innovations. It is grossly irresponsible to tar all Anglicans today with the terrible errors of ECUSA ad nauseum, when an impassioned struggle is going on within the larger Anglican communion over these errors. Sadly support for some of these errors even comes from the Archbishop of Cantebury, but in humility we Orthodox should acknowledge that many of our own Patriarchs in history have succumbed to heretical beliefs. At some points even a majority were in error, and a persuasive minority brought them back in line (Maximos). Instead of smearing the Anglicans collectively, how about offering words of encouragement to the traditional ones in this time of painful struggle. There are no protestants closer to the Orthodox than traditional minded Anglicans. We should not downplay our differences, but we shouldn't exaggerate them either.
6 posted on 05/04/2006 8:46:48 PM PDT by Mount Athos
[ Post Reply | Private Reply | To 1 | View Replies]
To: Kolokotronis

The fact is that the duplicity on the Anglican side was at a remove from direct contacts with the Orthodox, and probably involved deception (or perhaps self-deception) of the Anglican party, Bishop Grafton of Fond du Lac.

It seems fairly clear that Bishop Grafton, a leading American Oxford Movement type, personally held a faith more-or-less identical to the Orthodox, and was genuinely interested in union. The problem is that the rest of the PECUSA House of Bishops (with perhaps one or two exceptions) were only interested in getting an Orthodox nod for the validity of Anglican orders as a point in their polemics with Rome.

However much the Evil One acted in the Anglican duplicity at that time, and however much the Evil One has lead American Anglicanism further from the truth so that it is no reasonable to speak of apostacy rather than mere heresy, the Spirit was active in those dialogs: the way for many, many former Anglo-Catholic clergy and laity to escape from the Anglican apostacy back into the bosom of the One Holy Catholic and Apostolic Church was prepared in the discussions between Bp. Grafton and St. Tikhon.

The Anglo-Catholics should have left the Church many years ago. I am happy to be involved in the Evangelical wing of the Anglican Communion and we maintain the original Protestant Theology of the Anglican Church and the original "Protestant Episcopal Church in the United States of America".
I agree with you that the ECUSA has been reduced to a hopelessly Apostate and even Pagan organization.

Most of us did: my priest (Archimandrite Daniel Griffith, the senior priest of the Antiochian Orthodox Archdiocese) left after PECUSA failed to discipline; my last priest (Fr. Chad Hatfield, Dean of St. Herman's Seminary, Kodiak Island), my family and I, and almost everyone who used to attend the 10 AM High Eucharist at the Episcopalian cathederal in Salina, KS left when it became impossible to refuse to acknowledge priestesses as priests; . . .

There aren't too many Anglo-Catholics left in PECUSA.

Most of us did: my priest (Archimandrite Daniel Griffith, the senior priest of the Antiochian Orthodox Archdiocese) left after PECUSA failed to discipline 'Bishop' Pike; my last priest (Fr. Chad Hatfield, Dean of St. Herman's Seminary, Kodiak Island), my family and I, and almost everyone who used to attend the 10 AM High Eucharist at the Episcopalian cathederal in Salina, KS left when it became impossible to refuse to acknowledge priestesses as priests; . . .

There aren't too many Anglo-Catholics left in PECUSA.