In the aftermath of all disasters comes the assessment and the inevitable finger of blame. In the UK over the weekend and this morning I have already heard the BBC ratcheting up its anti-Bushism in its coverage. In the US, by all accounts, the liberal-dominated media coverage has already developed a 'bare-knuckle' anti-White House political bias. This even though New Orleans has never had anything remotely like a proper sea defence plan in place - the prime responsibility of local, not national, officials. 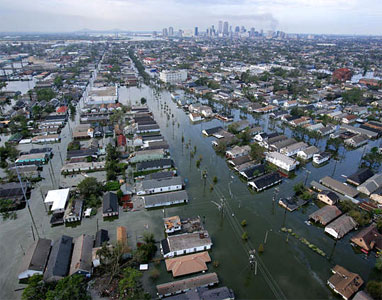 For a vital insight into the disgraceful coverage which is apparently being carried in the USA - and to get a better handle on things than the British media are giving it, especially the truly awful BBC (now experiencing their worst ever viewing figures ever!) -  have a look at this important Power Line posting. And here is the opening paragraph of it...

"The mainstream media's handling of Hurricane Katrina and the disasters in New Orleans is a disgrace, possibly the worst instance yet of media bias. Insane claims by left-wing nuts that President Bush botched the recovery effort on purpose so as to kill black people are repeated by the MSM in a chin-stroking mode, as if to say, "It's an interesting question--they might be on to something." Meanwhile, no one points out that it was President Bush who implored Governor Blanco to issue a first-ever mandatory evacuation order for the city, an action by the President that probably saved tens of thousands of lives." For the whole of this important posting go here.

In addition I have also heard the usual whining: "Why does God allow this sort of thing to happen?" Well the answer is simple enough at one level: because stupid human beings build in delta areas below sea level and then do not invest in anything like substantial sea defences. God is not duty bound to cover for man's ignorance and stupidity.

But, in the case of New Orleans, another issue needs to be introduced for those of us who remain able to perceive God's hand at work in the world today: the immoral cesspit this city had undoutedly become. Perhaps, because of the sheer social acceptablity of it, the very worst in the USA.

Southern Decadence has a history of "filling the French Quarters section of the city with drunken homosexuals engaging in sex acts in the public streets and bars," says a statement from the Philadelphia Christian organization Repent America.

This year's 34th annual Southern Decadence festival, which drew 125,000
revelers last year, was set to begin today in the Big Easy and run
through Monday. As writer John d'Addario explained in "Southern Decadence 2005: A How-To Guide" posted on FrenchQuarter.com:

Parades and non-stop parties aside, Southern Decadence may be most famous (or infamous) for the displays of naked flesh which characterize
the event – which is only fitting, since New Orleans in early September is generally the closest thing you'll ever experience to walking around in a steambath outside of a health spa. While police have started to crack down on public lewdness and pressure from a local crackpot conservative religious organization has caused the five-day festival to become a little more sedate than it was in years past, the atmosphere of Southern Decadence has stayed true to its name and public displays of sexuality are pretty much everywhere you look. Of course, the massive flooding of the city and evacuation order from Gov. Kathleen Blanco has forced the event's cancellation."

Now two things. We have to be careful with WorldNetDaily's highly interpretive 'prophetic' streak which appears to be part of its core philosophy. More importantly we must always be careful, if we are biblical Christians, neither to 'blame God' when man's hand ought to be seen plainly in events but equally neither exclude him if we really do believe he more than just 'active' in the world today but that nothing is outside of his control. That New Orleans has become 'America's Pompeii' was noted by a helpful article in The Daily Telegraph this weekend. Perhaps, in more ways than one.

Both worldly observers and weak-kneed Christians alike need to be aware that the Bible is clear enough (requiring no interpretation) that though God's retribution does not always reflect the sin of the individuals directly caught up in 'disasters' it does often reflect the urgent need for local and national recognition of increasingly ingrained sin in society, generally.

When the Babylonians sacked Jersualam, as the mible makes clear because of its 'instiitutionalisation' of sin, carrying off its inhabitants, God's people were, literally, destroyed. But it wasn't that God had been converted to the Babylonian cause. Indeed the Babylonians in their turn later paid for the evil they committed against Jerusalem and God's people.

A key section on what appear to be 'natural disasters' comes at Amos 3:6. Amos asks rhetorically: "If there is calamity in a city, will not the Lord have done it?" (Also on 'national sinfulness' see: Jeremiah 25:9 & 27:5-8) And Christ himself, referring to the tower that fell on and killed 18 Jews in Jerusalem in his day also made the connection between divine intervention in world affairs and the social and national need for repentance of sin and diverting  blame solely from those who actually died (Luke 13:1-5). This reveals that God has not at all changed his ways in the NT era.

But America, as with ancient Israel, should take some solace in the fact that God chastises those he loves. If what happened in New Orleans  means anything 'spiritually'  to the US  (and the rest of us need to look and learn because our nation's are certainly no more Godly) it is that God will not abide sin, especially institutionalised sin, forever. Particularly if we consider ourselves a 'nation under God'. Do we believe God had any hand in what happened at New Orleans? Well if we claim to believe that would God has spoken he means then only spiritual blindess  can prevent us from answering 'yes', given the evidence of unreprented sin the Scriptures that relate to them.

If we do not act against evil in our midst. Should we be surprised when God does? The Scriptures are clear enough.  As usual, we ignore them at our peril.

NB. For articles making the same point concerning other 'national' or 'natural disasters' from well-known Protestant and Reformed theologians  go here (for James White) and here (for John Piper).

Also That this posting has caused something of a furore over at David Vance's excellent A Tangled Web caused by his support and linking to it (especially as I am out for the afternoon and cannot respond to comments here till later). So why not zoom over there and catch up on the various non-biblically-informed abuse being hurled at me over it (and David)!

As I said in my comments over there, this is straightforward biblical teaching - confirmed thoroughly by Christ as unchanged at Luke 13:1-5. It may not fit the wet view the world and liberal Christians ahve of their personalise 'Christianity' but it is the teaching of Scripture and 2,000 years of the historic church. I am as touched and moved by the actual plight of many New Orleans foremr residents as anyone (perhaps more) but we are hear talking about an issue that goes beyond these immediate things. Judging by the visciousness of rresponses to spoken biblical truth not much has changed from the mentality of the lynch-mob (made up of unbelievers and alleged believers alike, many of the latter of whom kept shamefully quiet. They knew well enough he had stated publicly some very 'hard truths' that not only shocked but attracted the vengeance of the mob). The feeble Christianity that is today sponsored by the 'Jesus loves you!' gospel mentality (without first dealing the the issue of sin - which would constitute the two-part real gospel) do not want God associated with wrath. Well tough. Its everywhere in the pages of the Old and New Testament, whether we like it or not.

As I said at A Tangled Web, here is the bottom line: if you do not like Christ's own teachings, plainly taught in numerous places in Scripture, then take it up with him, not me.

Those pesky laws of physics! They'll kill us all!