Vermont Gov. Howard Dean has been issuing diatribes against the Bush administration that would surpass even Tariq Aziz with severe menstrual cramps. This strategy has made him the runaway favorite of the Democratic Party. Even Mr. War Hero, John Kerry, is getting shellacked by Dean. At times Kerry seems almost ready to surrender, making him look even more French. (If only Kerry had a war record or an enormously rich spouse to fall back on!)

In the wake of Dean's success, the entire Democratic Dream Team is beginning to sound like Dr. Demento. On the basis of their recent pronouncements, the position of the Democratic Party seems to be that Saddam Hussein did not hit us on 9-11, but Halliburton did.

Explaining his vote for a war that he then immediately denounced, Kerry recently said his vote was just a head-fake, leading some to wonder how many of Kerry's other votes in the U.S. Senate this would explain. He voted for war only to bluff Saddam Hussein into letting in the U.N. weapons inspectors. "It was right to have a threat of force," Kerry said, "because it's only the threat of force that got Hans Blix and the inspectors back in the country." But he never imagined that Bush would interpret the broadly worded, open-ended war resolution as grounds to start an actual war! "The difference is," Kerry said, "I would have worked with the United Nations."

None of the Democrats has the guts to come out and demand that U.S. forces turn tail and run when the going gets tough. If only one of them had the courage to demand cowardice like a real Democrat! So instead, they stamp their feet and demand that Bush go to the United Nations. Apparently it is urgent that we replace the best fighting force in the world with an "international peacekeeping force," i.e., a task force both feared and respected worldwide for its ability to distribute powdered milk to poor children.

Inconsolable that their pleas to "work through" the U.N. did not stop Bush from invading Iraq and deposing Saddam Hussein, now all the Democrats are eager for the U.N. to get involved so it can wreck the rebuilding process. Since we didn't let the U.N. lose the war for us, the least we can do is let them screw up the peace.

The idea that we would involve those swine in the postwar occupation of Iraq is so preposterous that it's under serious consideration as next week's slogan for the Howard Dean campaign. I hesitate to raise it to the level of a serious argument by offering a rebuttal, but as luck would have it, we have two models for how to occupy a country after a war. Getting "the allies" involved is not the winning model.

After World War II, the United States ran the Japanese occupation unilaterally. Without the meddling of other nations, the Japanese occupation went off without a hitch. Within five years, Gen. Douglas MacArthur had imposed a constitutional democracy on Japan with a bicameral legislature, a bill of rights and an independent judiciary. Now the only trouble Japan causes is its insistence on selling good products to Americans at cheap prices.

By contrast, the German occupation was run as liberals would like to run postwar Iraq – a joint affair among "the Allies," the United States, Britain, France and the Soviet Union. It took 45 years to clean up the mess that created.

The Soviets bickered with the French, refusing to treat them as "allies" (on the admittedly sensible grounds that they didn't fight). While plundering their zone, the Soviets refused to relinquish any territory to France. Trying to be gallant, the U.S. and British carved a French zone out of their own sectors. The Soviets then blockaded Berlin, built the Berlin Wall, and Germany was split for the next 45 years.

The British made Germany's war-torn economy worse by trying to impose socialism in their zone (as well as in their country). Predictably, economic disaster ensued. Over the next five years, the U.S. was required to spend the equivalent of about $200 billion annually in today's dollars to bail out Western Europe under the Marshall Plan. I note that there was no need for a Marshall Plan in Japan.

And the disastrous German occupation is the best-case scenario for "international peacekeeping." The less rosy picture involves the defaced corpses of American servicemen being dragged through the streets by dancing, cheering savages, as happened under "international peacekeeping" forces in Somalia in 1993. Showing that America is not a country to be toyed with, our draft-dodging, pot-smoking commander in chief responded by withdrawing our troops.

So naturally the Democrats are rooting for an international force in Iraq. The Democratic logic on national defense is: As soon as anyone in the military gets his hair mussed, we must pull out and bring "international peace-keeping" forces in. Our boys are in harm's way! People are dying! Bush lied when he said major combat operations were over! Let's run. That'll show 'em.

It was not lost on Osama bin Laden that it only took 18 dead in Somalia for the Great Satan to pull out. It should not be lost on Americans that this is what the Democrats are again demanding we do in Iraq.

1 posted on 09/10/2003 5:22:54 PM PDT by perfect stranger
[ Post Reply | Private Reply | View Replies]
To: perfect stranger
"On the second anniversary of the raids on New York and Washington we challenge America and its Crusade, which is teetering from its wounds in Afghanistan and Iraq."

(OK, that was really Ayman al-Zawahri. But it could have been Howard Dean).

And, most likely, an election. Unless Bush really screws up like his daddy did, which is certainly entirely possible.

But somebody really ought to send Neville Chamberlauin's old frock coat, hat and umbrella to Howard Dean.... I bet they'd fit him just fine. 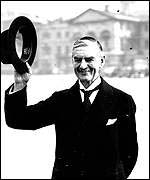 In the wake of Dean's success, the entire Democratic Dream Team is beginning to sound like Dr. Demento.

If I were Doctor Demento, I would be suing Ann for slander. (If I were single, I'd settle out-of-court for a lunch date :o)

On the basis of their recent pronouncements, the position of the Democratic Party seems to be that Saddam Hussein did not hit us on 9-11, but Halliburton did.

Ann tosses a baseball up in the air, and proceeds to smack it a la Barry Bonds. OK, Ann, time for a blood test to see if you're doing steroids.