He died late Sunday of pneumonia at his home in Toluca Lake, with his family at his bedside, longtime publicist Ward Grant told the Associated Press on Monday.

The legend was a bundle of contradictions. A high school dropout, he earned at least 47 honorary degrees, including a doctorate from Southern Methodist University, where a theater built in 1963 bears his name. Long an icon to the troops he doggedly entertained, he endured scattered catcalls during the war-torn Vietnam era. And perhaps the quintessential American entertainer of the modern age, he was born a Brit.

The Hope story began May 29, 1903, in Etham, at the southern tip of London. Leslie Townes Hope was the fifth of seven sons born to a concert singer and a stonemason. Far from affluent, the family moved across the pond to Cleveland a year later, where the brothers became U.S. citizens. Anecdotes of his early years, including singing on subways for his fare and telling sad stories to kindly housewives who would give him a few pennies, became part of his repertoire.

After trying boxing, dentistry and saxophone playing, he entered vaudeville as "Les Hope." But after being hounded by the moniker "Hope-Les," he changed his first name to Bob, touting himself as "a master of songs, patter and eccentric dancing." On screen, he would emerge as a master of eccentric chatter.

Vaudeville led to Broadway, and while playing in the Jerome Kern musical Roberta in New York, he met Dolores Reade, a nightclub singer. They wed on Feb. 19, 1934, and adopted four children: Linda, a television producer; Tony, an attorney; Kelly, a newspaper columnist; and Nora, a homemaker.

As a stand-up comic, he was noted for a rapid delivery and self-deprecating humor – a style that would help mold Johnny Carson, Woody Allen, Dick Cavett and Jay Leno, among many others. Mr. Allen, who considered Mr. Hope a role model, compiled a clip series from his films as a centerpiece for a 1979 Lincoln Center tribute. Mr. Cavett once said that from age 12 to 15, he would stand in front of the mirror and "become" Bob Hope, repeating all his best gags.

Just four years after his marriage, his movie and radio careers zoomed. He made The Big Broadcast of 1938, the first of his 57 feature films and the one that introduced his trademark song "Thanks for the Memory," and he joined radio's The Pepsodent Show for a 12-year stint as host.

During the war years, he was patriotic without seeming pedantic. Frank Tashlin, who directed him in Son of Paleface, declared that the greatest male entertainers to emerge from World War II were Donald Duck and Bob Hope. The comparison is not farfetched. Like Walt Disney's animated fowl, Mr. Hope's screen persona could be comically cantankerous and filled with grandiose self-delusions.

A few felt his performances for American overseas forces were self-serving. But many more were impressed by his determination to spend face time with the troops. He was chief entertainer of the United Services Organization (USO) through WWII, Korea, Vietnam and even into the Persian Gulf war.

Tales of his generous spirit "for the boys" are legion. Once, a 600-man troop walked 10 miles in North Africa to see him. They missed his show and started back. When Mr. Hope heard about it, he loaded his 60-person troupe into Jeeps, overtook the soldiers on the road and staged a private show for them.

He wrote four books recounting his experiences with the USO.

"I feel I got much more out of that than I gave," he told The Dallas Morning News in 1992. "I wish I could still do it. It was always the best Christmas present I could get. When I quit making the trips, something was missing. The first time I was home for the holidays, my wife and I didn't know what to do."

The 1940s also provided his greatest movie decade. Fred MacMurray and Jack Oakie were the first choice to star in 1940's Road to Singapore . They declined, and the roles went to him and Mr. Crosby. (Ironically, he got third billing in the first of the series – behind Der Bing and Dorothy Lamour). The trio became a part of film folklore, influencing later "male-bonding" movies and setting the pace for Mr. Hope's screen persona.

No other major star "lost the girl" so often. Particularly on the Road pictures, there was no contest. He would get the laughs; Crosby, of the smooth voice and confident manner, would win the damsel. Even on Road to Utopia, the one Road comedy in which Mr. Hope actually married Ms. Lamour, their child looked exactly like Mr. Crosby.

He hosted the Academy Awards more than any other performer, starting in 1939, the year of Gone With the Wind. He would later win two honorary statuettes – the Guinness Book of World Records dubbed him the most-decorated entertainer of all time – but was never nominated for acting.

"I appreciate those two honorary Oscars, but it's not like winning one," he said. "I made two films, The Seven Little Foys and B eau James, that I hoped would get nominations."

His early box-office successes included the Road series as well as The Ghost Breakers, Louisiana Purchase, My Favorite Blonde , They Got Me Covered, The Princess and the Pirate, Monsieur Beaucaire and, among his most memorable, The Paleface, in which he introduced the hit song "Buttons and Bows."

His movie career surged in the '40s, peaked in the '50s and dissipated in the '60s. His only two smashes during those decades were 1955's The Seven Little Foys and 1966's Boy, Did I Get a Wrong Number with Phyllis Diller. Even his pet project, Beau James, a biography of flamboyant New York Mayor Jimmy Walker, was a commercial disappointment.

A big star on the big screen, he became a giant on the small one. In 1950, Newsweek predicted, "Hope may one day be to television what he already is to movies.

That, of course, turned out to be an understatement. His casual glibness traveled beautifully into the nation's living rooms. He was the first movie star to sign a long-term TV contract – a move that sent shock waves through Hollywood. His home studio, Paramount, felt that he was being ungrateful by going over to the "enemy" medium and that his availability on the tube would erode his appeal onscreen. When his contract ended in 1957, the studio did not renew it.

By that time, it didn't matter: He was one of television's titans. As far back as April 1950, he'd collected the unheard-of sum of $40,000 for his debut as host of NBC's Star-Spangled Revue, the first of 285 specials for the network. Three years later, he starred in television's first hourlong color production. And in 1975 he signed a three-year, $18 million contract with NBC. He became almost as dependable a holiday visitor as Kris Kringle.

Yet during the social unrest of the late '60s and early '70s, he received some unaccustomed criticism. Although he attempted to present a neutral public facade, he was generally perceived as a hardline Nixon man. At one point during a Vietnam tour, he was booed after presenting President Richard Nixon's war strategy. At the 1971 Miss World pageant, he became the target of demonstrators who threw tomatoes at the stage to protest "the selling of women's bodies."

The decades as an entertainer paid off: He was a shrewd businessman who invested in oil, sports and above all in real estate. A major shareholder in the San Fernando Valley, he made a fortune when residential development became a major Southern California industry. In 1978, his wealth was estimated at between $400 and $700 million.

It's typical, too, that while other stars have handprints and footprints in the forecourt of Mann's Chinese, Mr. Hope's famous "ski nose" is implanted in the Hollywood Boulevard showplace. He did things his way, even if it meant taking an unpopular stand in an unpopular war, and his individuality served him well throughout an unprecedented career.

Thanks for the memories !!

1 posted on 07/28/2003 10:35:03 AM PDT by MeekOneGOP
[ Post Reply | Private Reply | View Replies]
To: MeeknMing
Lyrics:
-Words and Music by Leo Robin and Ralph Rainger
-introduced in the film "Big Broadcast Of 1938" by Bob Hope and Shirley Ross
-adopted by Hope as his theme songThanks for the memory

Thanks for the memory
Of candlelight and wine, castles on the Rhine
The Parthenon and moments on the Hudson River Line
How lovely it was!

And thanks for the memory
Of sunburns at the shore, nights in Singapore
You might have been a headache but you never were a bore
So thank you so much.

Thanks for the memory
Of sentimental verse, nothing in my purse
And chuckles when the preacher said "For better or for worse"
How lovely it was

Thanks for the memory
Of lingerie with lace, Pilsner by the case
And how I jumped the day you trumped my one-and-only ace
How lovely it was!

We said goodbye with a highball
Then I got as "high" as a steeple
But we were intelligent people
No tears, no fuss, Hooray! For us

So, thanks for the memory
And strictly entre-nous, darling how are you?
And how are all the little dreams that never did come true?
Aw'flly glad I met you, cheerio, and toodle-oo
And thank you so much
2 posted on 07/28/2003 10:38:40 AM PDT by ex-snook (American jobs need BALANCED TRADE. We buy from you, you buy from us.)
[ Post Reply | Private Reply | To 1 | View Replies]
To: ex-snook 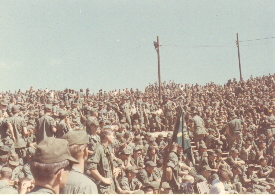 Great pics there. Thanks ! 8 posted on 07/28/2003 10:52:34 AM PDT by MeekOneGOP (Bu-bye Dixie Chimps! / Coming Soon !: Freeper site on Comcast. Found the URL. Gotta fix it now.)
[ Post Reply | Private Reply | To 6 | View Replies]
To: MeeknMing
Great pics! Whatever happened to Snow Bunny?? Wasn't she the former USO entertainer who always had great things to say about Hope?

Yes, Snow Bunny always had great things to say about Bob Hope. She did work with him on his USO Tours.

Finally getting back here. It (RealPlayer) can't find the music clip. :O(


Thanks for the memory
Of sentimental verse, nothing in my purse
And chuckles when the preacher said "For better or for worse"
{How lovely it was}

{Thanks for the memory}
{Of Schubert Serenade, little things of jade}
{And traffic jams and anagrams and bills we never paid}
How lovely it was!

We, who could laugh over big things
We're parted by only a slight thing
{I wonder if we did the right thing}
{Oh well "that's life" I guess}

{Thanks, for the memory}
{Of faults that you forgave}
{Rainbows on a wave}
And stockings in the basin when a fella needs a shave {giggle}
Thank you so much

{Thanks for the memory}
{Of tinkling temple bells, alma mater yells}
And Cuban rum and towels from the very best hotels.
{Oh, how lovely it was!}

{Thanks for the memory}
{Of cushions on the floor, hash with Dinty Moore}
{That pair of gay pajamas that you bought and never wore.} (Ha ha ha)
Say, by the way, whatever became of those pajamas? {(Huh?)} (Huh?)

{We said goodbye with a highball}
Then I got as "high" as a steeple {(Did you?)}
But we were intelligent people
{No tears, no fuss,} ((Hooray! For us))

{Strictly entre-nous, darling how are you?}
And how are all those little dreams that never did come true?
{Aw'flly glad I met you,} cheerio, toodle-oo
{Thank you,} Thank you so much . [end]