NASA's work force, in orbit and on Earth, observed a moment of silence Tuesday at the exact time that Challenger exploded in the sky Jan. 28, 1986. They honored not only on the seven Challenger astronauts, but also the three who were killed by a fire in their Apollo spacecraft at the pad Jan. 27, 1967.

At the launch site, flags flew at half staff for the second day in a row.

The two tragedies, separated by 19 years and a single day, represent the space agency's darkest hours.

``It is today that we remember and honor the crews of Apollo 1 and Challenger. They made the ultimate sacrifice, giving their lives and service to their country and for all mankind,'' Columbia commander Rick Husband radioed a few minutes before the airwaves went silent.

``Their dedication and devotion to the exploration of space was an inspiration to each of us and still motivates people around the world to achieve great things and service to others.''

The six Americans and one Israeli aboard Columbia marked their 13th day in space Wednesday. Their round-the-clock laboratory research mission, featuring more than 80 experiments, is due to end with a landing back at Kennedy Space Center on Saturday.

On the international space station, the two American astronauts and one Russian cosmonaut also paused to remember, and the airwaves fell silent there, too.

Challenger erupted in a fireball at 11:39 a.m., 73 seconds after liftoff. The moment of silence Tuesday ended with 10 bell chimes at Johnson Space Center in Houston, one for each the 10 astronauts killed.

The Challenger crew included Christa McAuliffe, a New Hampshire teacher who had hoped to give lessons from space. Last week, NASA announced it will hire three to six teachers for its next astronaut class.

McAuliffe's backup, Barbara Morgan, will be on Columbia's next flight, to the international space station in November. She quit her Idaho teaching job in 1998 to become a full-fledged astronaut. 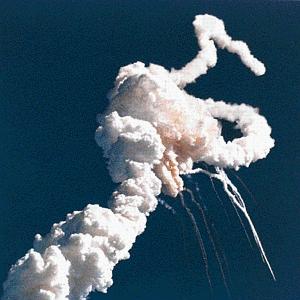 2 posted on 01/29/2003 8:55:53 AM PST by End Times Sentinel
[ Post Reply | Private Reply | To 1 | View Replies]
To: MeeknMing
Putting the Politically Correct In Space
On the taxpayers back
For Great PR
To secure more taxmoney
3 posted on 01/29/2003 8:58:10 AM PST by joesnuffy
[ Post Reply | Private Reply | To 1 | View Replies]
To: joesnuffy
There are comments from federal officials that say that the cause of the crash was the removal of asbestos reinforcing and insulator from the o-ring sealants. Sealant company workers had refused to work in asbestos and several sealants were tried, but none in icy conditions.
The truth is that asbestos mined in US and Canada does not have the same conditions as the more dangerous kind mined in Africa and used during WWII. American and Canadian asbestos miners and their wives, who washed their asbestos covered work clothes, had no higher lung problem rate than the average population in those areas.
In a professional course at a major university I was told at coffee break (not from lecturn) that we were spending billions to protect smokers from asbestos. The cilia in bronchial tubes push out the particles, while smokers cilia just hang there.
4 posted on 01/29/2003 10:29:16 AM PST by bobg (Bob G.)
[ Post Reply | Private Reply | To 3 | View Replies]
To: Owl_Eagle
I took a High School chemistry midterm while listening to the disaster unfold on the radio. The footage still makes me tear up and I clench whenever I hear the "Go with throttle up" call on any STS launch.

5 posted on 01/29/2003 10:36:49 AM PST by AngryJawa
[ Post Reply | Private Reply | To 2 | View Replies]
To: AngryJawa
I remember we'd just come back from lunch to my H.S. Geometry class.  The instructor told us she had good news and bad news;  The good news was that the exam scheduled for the next day had been postponed.  The bad news concerned the Challenger.   We then went into the next classroom to watch the coverage on T.V.
While the entire rest of the day was under a pall, I was kind of surprised years later when I heard Aunts and Uncles talk about where they were when Kennedy was assassinated and I realized that the only equivalent I had was the Challenger.  Of course all that changed one September morning...


”Unleash the Hogs of Peace.”
P.J. O'Rourke Parliament of Whores