Not good news re the potential on the SW side re the Chetco River (Brookings, Oregon) and the Pistol River (small communities from Gold Beach to Brookings).

The new Apple fire is still roaring and growing.

This is a new fire: "The Siuslaw fire in Lane County is not threatening people or residences, said Walsh of the Northwest Interagency Coordination Center. But it has burned about 400 acres of old and second-growth trees owned by the Bureau of Land Management and the private timber firm Roseburg Forest Products.

As B4 Ranch noted, Oregon is Still Burning, can be the title to this thread until the rains come this fall.

Oregon is still burning with some new fire stuff happening re the Apple Fire, the New Siuslaw fire in Lane County, and potential problems on the SW side of the Biscuit fire which could threaten the people living along the Chetco and in Brookings.

This is the best this fire has looked in a long time. 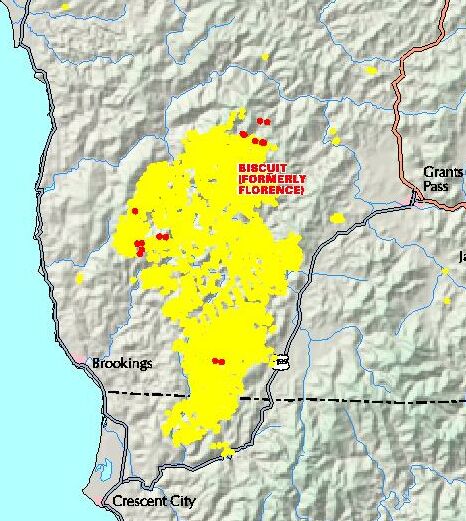 
Fire crews on Sunday finished burning a fireline around this Agness, where flames from the Biscuit Fire were within a mile of several dozen outlying homes.


With good wind conditions holding, crews were expected to next conduct burnouts along the fire's western side near Pistol River and Gardner Ranch, where residents were under a pre-evacuation notice, said Peter D'Aquanni, a fire spokesman.


"We're going to get in while we can," he said. "If we get another day like yesterday and last night and we're going to be in good shape on this west side."


Slightly lower temperatures, higher humidities and a strong inversion layer that keeps the fire from kicking up should help firefighters into the week, he said.

The Biscuit Fire stood at 435,654 acres Sunday and was 35 percent contained. The fire is the largest in Oregon in a century and is the biggest in the United States.


The fire in southwest Oregon and northern California covers an area about five times the size of the Portland-metro area, said David Widmark, spokesman for the Northwest Interagency Coordination Center in Portland.


On the southwest portion of the fire, crews continued to deal with a a 1,000-acre spot fire that ignited late Friday near the Chetco and Pistol river and could head into the river drainage system.


Residents along the upper Chetco River and upper Pistol River were put on alert earlier in the week in case they had to evacuate.

An evacuation notice for 17,000 residents in the Illinois Valley was lifted Friday, and pre-evacuation notices were still in effect Sunday for residents of the communities of Agness, Illahe, Wilderness Retreat and the upper Pistol River drainage.


Other fires burning around Oregon include:


-- the Monument-Malheur Complex, which had burned 44,062 acres and was 97 percent contained.


-- the Apple fire, 21 miles east of Glide, had burned 5,000 acres by Sunday morning. Three campgrounds were closed, as were the Umpqua Trail and portions of the North Umpqua River.


-- the Suislaw River fire, 15 miles southwest of Veneta, started Saturday and had burned 400 acres by Sunday.
7 posted on 08/19/2002 8:30:08 AM PDT by Grampa Dave
[ Post Reply | Private Reply | To 1 | View Replies]
To: All
The current Brainstorm magazine has an interview with Mr. Merlich, one of the owners of a helicopter firm that fights forest fires.

Here is what Mr. Merlich warned about the potential of the Siuslaw Forest if it catches on fire:

The fires on the west side were huge and large. The cycle is the fuel builds up and it gets to a point and then it all burns and replaces itself. In this day and age, what would happen if we had a 1,546 square mile fire? People are not going to accept that--they might think it's good until it happens, and then they aren't. That's like burning from Redmond all the way to Salem or the Coast Range. That's how big that is. So our choices are to let it burn or to do something in advance of the fire--spend some money and get some products out, do a little thinning.

The Siuslaw, for one, is headed for that type of thing again. The trees are getting so thick. You don't do anything: there's no roads--when it catches on fire, it's going to burn.

Lets hope that Mr Merlich is wrong. Did some Green Jihadist read that article and decide to use Arson to start this fire?

8 posted on 08/19/2002 8:36:28 AM PDT by Grampa Dave
[ Post Reply | Private Reply | To 7 | View Replies]
To: Grampa Dave
But it has burned about 400 acres of old and second-growth trees owned by the Bureau of Land Management and the private timber firm Roseburg Forest Products.

I thought the green jihadists taught us that OLD growth trees were fire resistant.

Thanks for the update Dave.

The Siuslaw, for one, is headed for that type of thing again. The trees are getting so thick. You don't do anything: there's no roads--when it catches on fire, it's going to burn.

Go to this link for this interview: (Link to Brainstorm Interview with Oregon Fire Fighters)

Ernest, can you provide a link to the thread re this interview that you posted over the weekend. Thanks!

When do the Green Jihadists lie to us and use bad science to lie and for rural Cleansing?

I will be posting the most incredible Bravo Sierra article from the Eco Fire Envirals a little later. They are putting out the Bravo Sierra about how good these fires are, even if they burn it all down.

These anti America Watermelons are incapable of ever telling the truth! They lie 24/7 and will continue to do so as long as they have the mediots in their back pockets.
11 posted on 08/19/2002 8:44:42 AM PDT by Grampa Dave
[ Post Reply | Private Reply | To 9 | View Replies]
To: All
The official fire map put on 16 August from data points of 15 August.

The entire Kalmiopsis Wilderness Area has basically been burnt, is burning and will burn.

Expect the Green Jihadists's Fire is Good, Fire Ecologists to start their Bravo Sierra about how good this good fire really was for the wilderness that was burnt up.

Will post an update later from the Apple fire. Will have new info after lunch. Smoke still VERY thick (and much more acrid) here and highway 138 still closed between mileposts 38 and 55. Supposed to be only about 80 here today with temps going back up mid-week. This forecast is in variance with what I am reading about cooler, moister air expected for the Tiller fire. We SHOULD be having about the same weather. Going to try and track down the inconsistency. Staying safe/buttoned down in-doors/air cleaners running at max.
16 posted on 08/19/2002 9:13:56 AM PDT by justshe
[ Post Reply | Private Reply | To 13 | View Replies]
To: Grampa Dave
We might be getting some showers this evening...

I spend a lot of time in Oregon fishing, vacationing and visiting people. These fires have kept me from coming to Oregon for at least 2 trips. We had planned on being in the Gold Beach/Brookings area for about 10 days in September for our annual pilgramage to SW Oregon in the early fall. That is now on hold.

Starting in about 1994, I saw the impact of the no roads, no logging and no brush removal was having re access to the back country fly fishing streams. Now you can't get to many due to the lack of roads, trails and over growth of blackberry bushes around the streams. This brushy growth will often kill the good bugs in the streams that trout, and baby steelhead/salmon will feed on after hatching and on their way to the ocean. Besides it has made all of these areas dangerous to be in during the fire season.

I have helped to defeat the attempted closing of some of the rivers to fishing as per the lies of the Green Jihadists. These closures would have resulted in Rural cleansing of many small towns dependent on the visiting steelhead, trout or salmon fishers.

So I'm just one of those ugly Californians who loves to visit Oregon. I'm concerned that it is the lab prototype of what the Green Jihadist Watermelons have in mind for the rest of the country.
19 posted on 08/19/2002 9:31:11 AM PDT by Grampa Dave
[ Post Reply | Private Reply | To 18 | View Replies]
To: Grampa Dave
Here you go:

Are all of the fires on the eastern side of the mountains (Cascade range? ).