Sweden, which has a population of around 10 million, has the highest per-capita number of deadly shootings of 22 European countries. Forty-seven people have been shot dead so far this year, which, while far from American levels of gun homicide, is extreme for Europe. Other European countries have come to look at Sweden with horror.

It may be shocking for Americans to learn that in Sweden—the land of IKEA, Spotify and Greta Thunberg—all of this is going on. Perhaps the reason you don’t know about it is because of the uncomfortable reality of how we got here.

Among shooting suspects, 85 percent are first- or second-generation immigrants, according to the newspaper Dagens Nyheter, as immigrant neighborhoods have become hotbeds for gang crime. National Police Commissioner Anders Thornberg has described the violence as “an entirely different kind of brutality than we’ve seen before” and his deputy, Mats Löfving, says that 40 criminal clans now operate throughout the country. Spreading fear are “humiliation robberies,” targeting children and youth, in which victims are subjected to degrading treatment by assailants, such as being urinated upon. Just this week, four men were sentenced for robbing, beating and urinating on an 18-year-old, who was also filmed by his tormentors.

All of which is why, for the first time ever, crime emerged as a top priority among voters ahead of this past weekend’s general election. Swedes made their concerns plain on Sunday, when they awarded the country’s most strident anti-immigration party more than 20 percent of the vote.

The aftermath of a bombing at a multi-family home in Stockholm. (Barbro Bergfeldt via Alamy)
1 posted on 09/22/2022 9:50:29 PM PDT by SeekAndFind
[ Post Reply | Private Reply | View Replies]
To: SeekAndFind 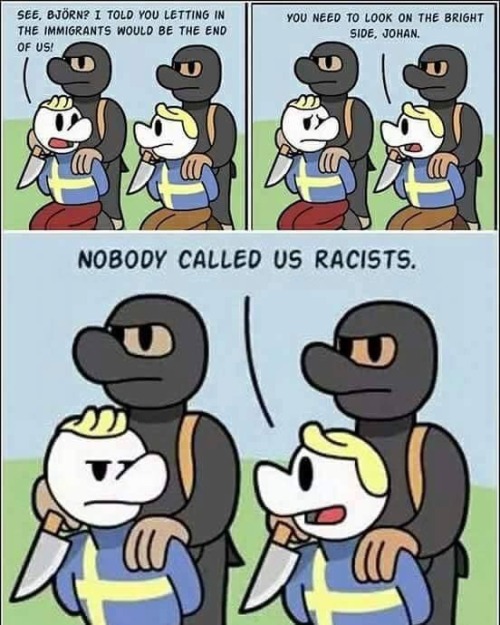 Only 20% voted for the ‘anti-immigration party’? Really?

So, 80% of Sweden wants to be victimized by the Africans you guys so lovingly welcomed into your country? Swedish idiots don’t deserve any sympathy, and my brother lives there.

4 posted on 09/22/2022 10:02:00 PM PDT by Bullish (Rot'sa Ruck America. )
[ Post Reply | Private Reply | To 1 | View Replies]
To: vpintheak
The author, Paula Neuding explains that the underlying reason for the right-wing sweep is the denial by the government and the media that the country has been experiencing severe problems, despite the fact that citizens can see violence taking place around them and experience it happening to them. The government and media want to avoid accusations of racism. Neuding continues:

Because most bombings never make it to court––evidence is literally blown up, and a strong code of silence marks the Swedish gang scene––it has been difficult to tell the motives behind each attack. But when journalists reviewed legal verdicts in such cases between January 2018 and January 2020— 20 detonations involving 32 perpetrators—they found motives ranging from attempted murder, extortion, and revenge for infidelity. They also noted that not every single explosion is related to the gang scene, although most are.

The bombings have mainly been directed at objects—such as cars and buildings—rather than individuals, which explains why there haven’t been more deaths. Still, fatalities have included a 4-year-old girl who was killed in a car bombing in Gothenburg (2015); an 8-year-old boy who was asleep when a hand grenade was thrown into the apartment where he was staying in Gothenburg (2016); and a 63-year-old man who picked up a hand grenade lying in the street in a Stockholm suburb, thinking that it was a toy (2018). In 2019, a 23-year-old student in the university town of Lund suffered severe facial injuries when she happened to pass by a shop when a bomb exploded in a trash can outside. Her eyesight was reduced to 2 percent. She told the press in an interview that she still does not dare to walk by trash cans.

There are some places to which ice cream trucks and newspaper and postal delivery people cannot safely venture. But far beyond that, firefighters and ambulance crews will not go to those areas without a police escort. Those places are beyond unsafe.

So Sweden is struggling. But what about the U.S.? We have a president who has effectively quashed oil and gas development on federal lands. We have Rep. Rashida Tlaib (D-Mich.) throwing a tantrum at banks that will not stop funding fossil fuels in the name of ESG. We have Gov. Gavin Newsom (D-Calif.) demanding that everyone in his state switch to electric cars and then telling people not to charge them. Newsom’s delusion has even extended to diesel trucks, which, according to him, are racist.

I’ll bet today’s Swedes bitterly resent their forefathers’ decision to rape, murder and enslave all those poor peaceful black people way back when. If they hadn’t, the black and white people of Sweden today would all be living in peaceful harmony.

“It may be shocking for Americans to learn that in Sweden—the land of IKEA, Spotify and Greta Thunberg...”

They sure as hell don’t need any more suffering.

I don’t remember the Vikings making it that far south

diversity is NOT a strength.

Vikings were raiding in the Mediterranean Sea in 859AD...

Make sure to go to link to read the full article. I find it interesting that the Swedish author of the article cannot even bring herself to state who is perpetrating all of this crime, namely Muslim immigrants that the leftist liberal gov’ts of the last 10-15 years plus, opened the immigration doors up to in Sweden, letting these Muslims all come into their country. And they don’t assimilate; rather they want to dominate and use Swedes to get free welfare benefits from those inhabitants of the country that let them in.

The author calls them “immigrant gangs”, never mentioning that they are all Muslims from predominantly the Middle East plus Afghanistan. That’s how deeply rooted Sweden’s problems are; even this author, when specifically discussing Sweden’s crime problem, cannot bring herself to utter the words “Muslim gangs” lest she be accused of being racist. So now Sweden’s citizens are fed up with their liberal, socialist leadership, and have elected a right wing party. It will be interesting to see how this all plays out.

Anyone with half a brain could see this coming a mile away. When a shepherd brings a wolf into his herd of sheep it’s not an accident, and Sweden wasn’t the only European country to do this.

They also made it to China as traders at least.

16 posted on 09/23/2022 4:40:14 AM PDT by Pontiac (The welfare state must fail because it is contrary to human nature and diminishes the human spiritI)
[ Post Reply | Private Reply | To 11 | View Replies]
To: flaglady47; joma89; MinuteGal; M Kehoe
Make sure to go to link to read the full article. I find it interesting that the Swedish author of the article cannot even bring herself to state who is perpetrating all of this crime, namely Muslim immigrants

It is probably a mistake to blame the author.

Writers don’t get to make those kinds of decisions.

17 posted on 09/23/2022 4:49:03 AM PDT by Pontiac (The welfare state must fail because it is contrary to human nature and diminishes the human spiritI)
[ Post Reply | Private Reply | To 12 | View Replies]
To: Pontiac
It probably the editorial policy of the paper set forth in the “Style Guide”

Forced diversity certainly isn’t.
Even back in my day 90’s Army, people of all races got along fine, but at the end of the day we mostly all went our own ways and hung out with people like us.
No one had a problem with that as far as I could tell. You had your few racists and knuckleheads on both sides, but they were ignored and ostracized.