Senate negotiators unveiled an 80-page bill Tuesday evening responding to the mass shootings at the Tops supermarket in Buffalo, N.Y., and the Robb Elementary School in Uvalde, Texas, capping weeks of intense negotiations.

Sen. Chris Murphy (Conn.), the lead Democratic negotiator, is hailing the bill as the biggest breakthrough on the issue of gun violence in 30 years and predicted Tuesday it would save lives.

Sen. John Cornyn (Texas), the head Republican in the talks, says the legislation will take guns out of the hands of people who are dangerous or break the law but won’t affect the gun rights of law-abiding citizens.

Here’s what’s inside the package:

Enhanced background checks for people 18 to 21

The legislation would enhance background check requirements for buyers younger than 21 who have juvenile criminal records.

It would keep in place current law requiring the completion of a background check investigation for people between the ages of 18 and 21 within three days but would also require the National Instant Criminal Background Check System (NICS) to check state records to identify individuals with juvenile records that would disqualify them from purchasing firearms.

But the enhanced background check requirements for buyers between 18 and 21 years old would expire on Sept. 30, 2032, requiring a future Congress to pass new legislation to extend it.

Both the Uvalde and Buffalo shooters were teenagers.

Money for red flag laws and other intervention programs

The bill would expand the Byrne JAG law enforcement grant program to allow states to use federal funding to implement crisis intervention court programs to reduce gun violence. States would have the flexibility to use the money to administer red flag laws to take guns away from people deemed dangerous to themselves or others.

It would set up due process protections for intervention programs.

Cornyn explained on the floor Tuesday that if a state red flag law doesn’t include due process protections, it will not be eligible for grants.

The legislation would suspend a person’s right to buy or possess a firearm for a period of at least five years if he or she is convicted of a misdemeanor crime of violence against a person with whom they have or have had a romantic relationship.

Under current law, individuals who are convicted of a misdemeanor crime of domestic violence against a spouse, a person with a child in common or a cohabiting partner lose their rights to purchase or possess firearms, but advocates have long lamented the so-called “boyfriend loophole” when none of those conditions apply

It requires the Centers for Medicare & Medicaid Services to provide guidance to states on how to increase access to health care and mental health services through telehealth programs to Medicaid and Children’s Health Insurance Program enrollees.

It also seeks to improve access to mental health service in schools by requiring the Centers for Medicare & Medicaid Services to provide states with resources to expand health programs at schools.

Clarifying the definition of gun dealers

The bill clarifies that people who regularly buy and sell firearms to earn profits must be registered as Federal Firearm Licensee, which would require them to run background checks for transactions.

The language is intended to crack down on people who buy and sell large numbers of guns but intentionally avoid dealer licensing requirements.

Cracking down on straw purchasers and illegal trafficking of firearms

The bill would establish a new and specific criminal offense for straw purchasers and gun traffickers and establish tougher penalties, up to 15 years in prison, for people who break the law.

The language is intended to make it easier for prosecutors to charge gun runners. Under current law, prosecutors often have to rely on charging people who illegally traffic firearms with paperwork violations.

It would give law enforcement tools to charge people who act as middlemen for criminals and drug traffickers.

It would direct the U.S. Sentencing Commission to adopt tougher guidelines for straw purchasers and gun traffickers.

“This bipartisan gun-safety legislation is progress and will save lives. While it is not everything we want, this legislation is urgently needed,” Schumer said in a statement, promising to bring the bill to the floor immediately.

McConnell announced he would vote for the bill, likely giving it at least 61 votes and enough to overcome a filibuster. 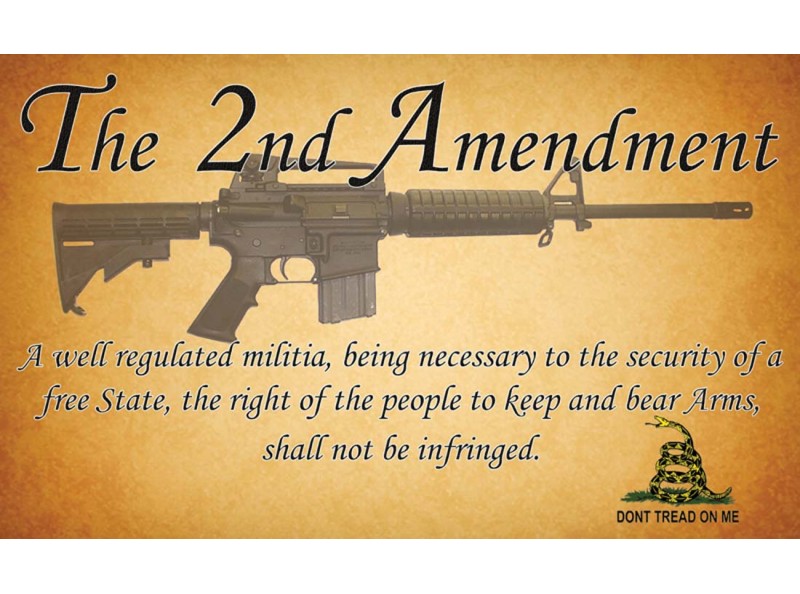 This Ping List is for all news pertaining to the 2nd Amendment.

And next year the perpetual drumbeat will be “close the over-21 loophole and apply more stringent background checks to all buyers! It’s common sense!”

What was the democrats compromise in this? Are silencers being removed from the NFA? National reprocity? Oh, democrats offered and compromised on nothing?The Republicans basically negotiated the democrats to take a few slices of bread instead of the whole loaf, despite the republicans having the power to keep the entire loaf of they chose. Typical loser party genius, handing the Dems a big win in an election year.

In response to the 80 pages of proposed legislation, I give to you 1 sentence:

“A well regulated Militia, being necessary to the security of a free State, the right of the people to keep and bear Arms, shall not be infringed.”

Should have stuck in a amendment to 21 for voting.

The Texas law enforcement f+cked up so badly that they have lost a lot of credibility as advocates of guns protect people, they may be the most pro gun state out of Montana and I consider Texas my second home but ..dumbasses

I lost my weapons in a unfortunate boating accident several years ago, but I do see alot of people mostly younger guys doing open carry...geez don't be a dumbass...if you want to protect you community get concealed carry or...but don't be a target..if one is inclined they will take you out first...

I've lived about everywhere in the world and it amazes me that some think another American is their enemy. Par’d most of the world is our enemy, but they have been very effective of dividing America.

With the weapons I trust you know what to do, unfortunately I'm not sure that in todays world of this side or my side we have forgotten a nation divided can not stand...

More redundancy laws that do nothing but further hamstring/frustrate those who buy guns for self defense and protection against socialist anti-American idiot totalitarian communist legislators who want to disarm the citizenry and trash the constitution with a 1000 cuts of overreaching unconstitutional useless regulation.

The communists want to overthrow the Constitution by suffocating it with laws that make criminals out of anyone who dares to embrace its protections and exercise the rights it guarantees! Laws that encourage criminal behavior but punish those who obey the laws. Criminals are protected, while the innocent go to jail.

The legislation would suspend a person’s right to buy or possess a firearm for a period of at least five years if he or she is convicted of a misdemeanor crime of violence against a person with whom they have or have had a romantic relationship.

They don’t enforce the laws already on the books. Hunter is still walking around free as a bird.

Can he and the rest of those homos be tried for treason?

It’s surprising that it’s only 80 pages. Most legislation these days weighs in at a hefty 1000+ pages once it is loaded down with pork and unrelated agenda items that can’t get passed any other way.

If this country were truly filled with only Americans, then you’d have a point.

Would you walk around the average democrat run, urban hellhole and feel safe?

How do you then distinguish between true Americans, who you don’t need to fear, and urban “teens” and illegal enemy combatants who are flooding this country through the southern border?

How do you realistically trust someone these days considering the news we have been seeing on a daily basis? Heck, we can’t even trust the police to protect us any more. How do we trust the average stranger on the street?

This will require new background checks on everyone that buys a gun to make sure that you didn’t do anything wrong before you turned 18.

You better hope the records from 40-50 years ago are correct and up to date because they could be used to deny you a gun purchase.

Did everyone think this crap will only effect those 18-20 first time gun buyers? Dumbasses! This will effect EVERY gun sale from this time going forward.

Of course it isn't. Thanks for saying it out loud.

I'll wait for others to look at the bill and comment.
Early conclusions are often wrong.

Why can’t I buy a gun from a friend who has several firearms, if I can’t get a license to carry a weapon?

Notice that The Hill never provides the actual name or number of the bill, or a link to the text so that people can read it for themselves.

Anybody got a link to the damn bill...