When the New York Post brought to light Hunter Biden’s laptop in October 2020 just before the presidential election, 51 top intelligence experts all discredited the story that has now been verified by The New York Times and they steadfastly refuse to apologize for it.

These are current and former spies and high-ranking military officials who are supposed to ensure the safety of the United States. Instead, they ostensibly provided cover for President Joe Biden to get elected, claiming the laptop story “has the classic earmarks of a Russian information operation” in what many consider a Deep State operation designed to ensure former President Donald Trump did not get reelected.

The New York Post was smeared and censored for their reporting on the subject. Americans were banned from social media for mentioning it. After all that, the New York Times now admits the story was true on the eve of Hunter Biden being possibly indicted for criminal and tax-related crimes.

Former Director of National Intelligence James Clapper, former Director of the CIA John Brennan, and former Secretary of Defense Leon Panetta were among those who signed a letter claiming that the laptop story was false.

The only think fake? The news.

“We do not know if the emails… are genuine or not,” the letter said. They labeled them as “suspicious” casting doubt on their authenticity and once again deflecting by pointing fingers at Russia.

Although the officials who signed the letter claimed to have worked “for presidents of both political parties,” most of them were Democrats and the rest apparently were Never Trumpers.

The media was an all-too-willing accomplice in the cover-up. Politico splashed the headline, “Hunter Biden story is Russian disinfo, dozens of former intel officials say.” They have not corrected it or taken it down. And they weren’t alone.

In the category of – didn’t see this coming : The ⁦@nytimes⁩ confirms the authenticity of Hunter Biden emails derived from his laptop that had been previously dismissed as Russian disinformation. 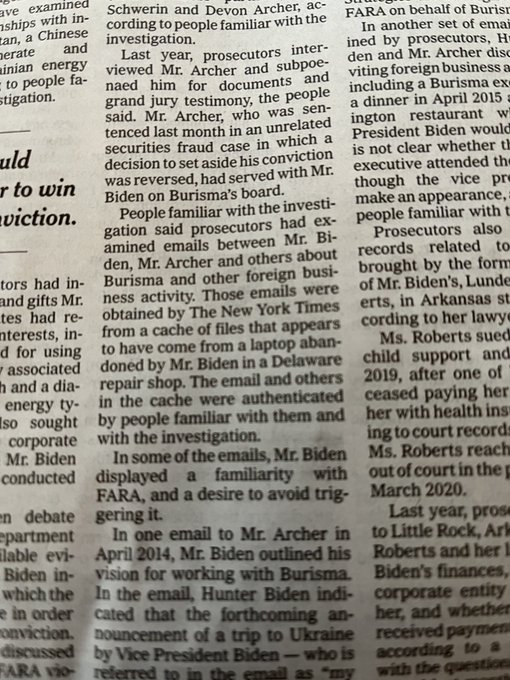 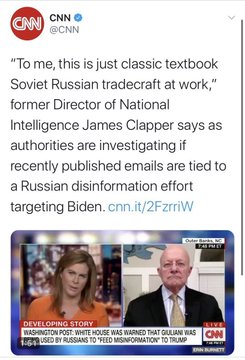 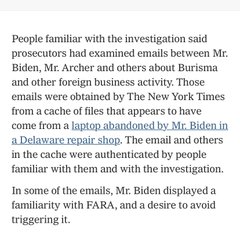 The Politico headline was seized upon by Democratic operatives who took to Twitter to echo it endlessly, calling the laptop story “fake news” in a propagandistic attempt to justify the censorship of the New York Post reporting.

Twitter banned the New York Post over the story just days before claiming it involved “hacked materials.” Facebook also used the false allegation and refused to allow sharing of the story until it was “fact-checked.” According to the New York Post, that never happened.

The trifecta of former government officials, Big Tech, and Big Media colluded to ensure the reporting was sent into a deep black hole and would not have an effect on Biden getting elected.

The DC newsrooms knew it. They covered it up.

This is a total crisis for the US media.

Trump on Joe Biden and the Hunter laptop emails: “He’s in the midst of a scandal.”

Also Trump: “They spied on my campaign.”

As for the computer repairman who brought Hunter Biden’s laptop to light, he has been discredited by the media and ignored by the FBI. He reportedly wound up having to close shop and move after coming forward to do the right thing.

The New York Post has continued fearless reporting on the laptop. Following the election, Hunter Biden left-handedly admitted the laptop was his. Politico confirmed last year that the laptop’s materials were real as well. The story now ends with the New York Times finally authenticating the material on the laptop.

No one on the left has had to answer for any of this. Not only are the intelligence officers not apologizing for lying while the media deep-sixes the story, Twitter and Facebook are still reportedly censoring political information. Congress has taken almost no action to stop it.

The New York Post reached out to the intelligence officials who signed the original letter. Most of them had no comment. But a few arrogantly doubled down on their assertions.

Today seems like a good day to remind everyone what Joe said about Hunter’s laptop during the debates 😁 #LaptopFromHell #HunterBiden pic.twitter.com/N1U8opnDP3

Clapper defiantly stood his ground, “Yes, I stand by the statement made AT THE TIME, and would call attention to its 5th paragraph. I think sounding such a cautionary note AT THE TIME was appropriate.”

Russ Travers, who is the former National Counterterrorism Center acting director, replied, “The letter explicitly stated that we didn’t know if the emails were genuine, but that we were concerned about Russian disinformation efforts. I spent 25 years as a Soviet/Russian analyst. Given the context of what the Russians were doing at the time (and continue to do — Ukraine being just the latest example), I considered the cautionary warning to be prudent.”

Don Hepburn, who is a former national security executive and now president of Boanerges Solutions LLC, responded, “My position has not changed any. I believe the Russians made a huge effort to alter the course of the election… The Russians are masters of blending truth and fiction and making something feel incredibly real when it’s not. Nothing I have seen really changes my opinion. I can’t tell you what part is real and what part is fake, but the thesis still stands for me, that it was a media influence hit job.”

Emile Nakhleh, who is the former director of CIA’s Political Islam Strategic Analysis Program and is now at the University of New Mexico, replied, “I have not seen any information since then that would alter the decision behind signing the letter. That’s all I can go into. The whole issue was highly politicized and I don’t want to deal with that. I still stand by that letter.”

Currently, CNN, MSNBC, ABC, CBS, and NBC are totally pigeon-holing the story, praying it will miraculously go away, according to Fox News. With a looming indictment for Hunter Biden and the anger among Americans growing by the minute, that is highly unlikely.

Stay tuned. It won’t be long.

Everything is OK when defeating Trump was t H e objective

NYT just doing this to cover their ass.

Putin about to blow it up. Laundry business in Ukraine is done.

Lie with dogs, wake up with fleas.

GOD will not be mocked.

Even “at the time”, it only took someone with a 4th grade education to know the laptop was real. However, go ahead and keep digging yourself into the credibility hole you are in.

I don’t know exactly when the transition occurred, but we clearly we now live in a nation in which an oligarchy decides what happens - and our input is limited and progressively diminished.

Lara takes reminds everyone that Ukraine is how the left took Donald Trump out.

Total Intelligence systems/personnel failures and fuckups at the highest level of government. No wonder Putin is laughing at us and Xiao is busy drawing up a new map of the world, all written in Red Chinese terminology.

The media is compliance in treason, period and I say this as a journalist of 50 years standing/experience including Vietnam.

The Republicans will get one last chance to clean “house” in Nov. 2022 and 2024. This time they had better use atomic ExLax, nuclear enemas, and congressional investigations/grand juries to get the bastards
who have sold America out through stupidity, greed, lust for power, hatred of Donald Trump, and plain old Treason.

Our founding fathers intended for congressional duty to be a term of service, then back to whatever "day jobs" they had. I do not think the founders wanted professional politicians entrenched up there.

Leslie Stahl is a pig, a lying pig.

My friend sent me a couple of emails saying that Trump is still in charge, the military is going to step in and help him, blah blah blah. One is an audio with (allegedly) Trump’s voice. I deleted them; too weird.

If Trump truly were in charge we wouldn’t be circling the drain as we are. Can’t the conspiracy theorists follow this logic?

The Bidens: NOTHING but LIARS and CRIMINALS........

NOT A PROBLEM, or I wouldn’t be supporting these same people on Ukraine.

Why anyone would believe the IC after all of what they have done is beyond me.