Department of Homeland Security (DHS) Secretary Alejandro Mayorkas' meeting with Border Patrol agents in the Yuma Sector on Wednesday did not go well after he admitted the staggering amount of illegal border crossings has made the agents' job more difficult.

In an audio recording of his remarks to the agents, which was obtained by Townhall, Mayorkas conceded the massive influx of people illegally crossing into the sector, along with the rest of the southern sectors, has not been easy.

"The job has not gotten any easier over the last few months and it was very, very difficult throughout 2021. I know apprehending families and kids is not what you signed up to do. And now we got a composition that is changing even more with Cubans, Venezuelans, Nicaraguans, and the like, it just gets more difficult," Mayorkas said in the recording.

Mayorkas said DHS is trying to work with the Mexican government to stop the flow of immigrants before they reach the U.S. border.

"I know the policies of this administration are not particularly popular with U.S. Customs and Border Protection, but that's the reality and let's see what we can do within that framework," Mayorkas added.

An agent pressed Mayorkas on how DHS can reconcile saying border security is the main mission for Border Patrol, yet agents are unable to patrol the border due to the policies the Biden administration has in place. Border Patrol agents are being utilized to process the thousands of illegal immigrants.

Mayorkas said he appreciated "the candor" and explained he is working to ensure agents have the personnel, funding, and equipment they need to do their job. The agent replied they have been hearing that answer for years.

According to sources present at the meeting and the audio recording, the agent who asked the question then turned his back on Mayorkas.

"Let me just say, you can turn your back on me but I won't turn my back on you," Mayorkas said. The agent replied Mayorkas turned his back on the agents first.

Another agent told Mayorkas there are many issues in the Yuma Sector, pointing to the overcrowding of family units at their processing site and that handling them is not their responsibility. Mayorkas reiterated that agents being pulled off of the border to process illegal immigrants is not what they signed up to do.

The second agent said it has been "demoralizing" to see politicians and others "demonize" Border Patrol when they often save illegal immigrants from injury and death. It is a possible reference to the outrage that started over false claims that agents on horseback were "whipping" people illegally crossing the border in the Del Rio Sector, which included Mayorkas, Vice President Kamala Harris, President Joe Biden.

Mayorkas said he understands being demonized because he has had threats against his life and the life of his family.

Another agent asked Mayorkas about the low number of people being enrolled in the Migrant Protection Protocols, also known as "Remain in Mexico," a policy the Biden administration was forced to re-up by court order after President Biden attempted to shut down the program.

"The numbers are not where they need to be. I agree with that," Mayorkas admitted, adding the U.S. is still negotiating with Mexico.

Mayorkas revealed he has approved for gaps in the border wall system, which were created when Biden ordered a halt on construction, to be filled, particularly where gates were supposed to be installed.

"Look, it's worse now than it, frankly, has been in at least 20 years, if not ever," Mayorkas said at another point in the meeting, regarding the overall situation at the border.

One exasperated agent told Mayorkas the situation in the Yuma Sector was much better under former President Donald Trump because "everyone was doing their jobs."

In the recording, Border Chief Patrol Raul Ortiz did not seem happy with the questions being asked because, according to him, it came off as griping instead of coming to Mayorkas with solutions.

Mayorkas can be then heard going back to the first agent who turned his back on him and asked how long he had been part of Border Patrol. When the agent replied with 16 years, Mayorkas said he was prosecuting death penalty cases in California, "You don't know anything about me."

The agent said he knows Mayorkas has had a long career, but "you said you're going to change it, the only that's changed is it's gotten worse."

Sources at the meeting told Townhall Mayorkas was visibly upset. DHS did not respond to a request for comment in time for publication.

Yeah, we might have to take thirty or forty million more while they get the bugs out of that system.

You might want to talk to people on THIS side of the border, dumbass.

DHS serves no useful function. It should be disbanded forthwith and its funding redirected to Customs and Border Protection.

Mayorkas sounds sympathetic with the DHS people. I think his hands are tied but then why did he take the job?

How many illegal crossings in 2021? 1.8 million is the ICE Estimate?

And we’re worried about Ukraine’s borders?

No rush, besides it’s not as important as the Ukrainian border.

When have whips ever been used for anything at the border, except in fictional bogus MSM stories about them being used on people?

It’s part of the plan. Let crime explode in the cites. Bring in millions of new criminals. Then federalize law enforcement to disarm he citizens in order to protect them.

Yep. Kinda hard to gaslight the guys that see it every day and KNOW EXACTLY WHAT IS GOING ON. The La Raza aficionado at the top rightfully got his ass handed to him.

If there ever was a time when assault and battery was appropriate this meeting seems like one. Majerkas should have left there hog tied with a note pinned to his chest “build the wall.” Absolute overwhelming force is the one thing Bidumb’s crowd understand and they need to feel some pressure, not just jawboning. The whole bunch need to experience what a miserable life really is or can be when they don’t do their sworn job.

He doesn’t sound sympathetic to me-not with that belligerent you-don’t-know-me attitude and all the artful dodging-he sounds more like a lazy fed employee trying to keep his worthless ass from being fired...

It’s a joke and yes it was a bogus narrative proffered by the MSM, but point was, they didn’t have them but if they did they didn’t use them, whereas in Ukraine they would have anti-tank misssles from the U.S. and would use them.

And the second point is whips don’t kill but Dems would ironically be opposed to them.

I thought Kamala was the lead on the border? 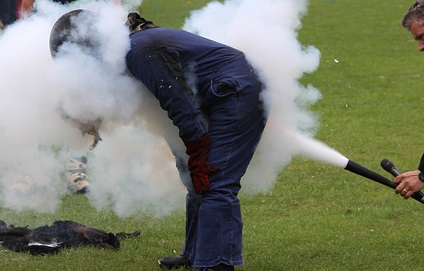 I’ve wondered why he hasn’t resigned since about the beginning. He knows better.

19 posted on 01/26/2022 1:41:04 PM PST by gloryblaze
[ Post Reply | Private Reply | To 6 | View Replies]
To: Walrus
For starters, the governor could "fully" reactivate the real Texas Rangers. Their enumerated responsibilities include many serious problem areas involving the invasion underway at the southern border of TX:

The Texas Ranger Division is the primary criminal investigative branch of the Texas Department of Public Safety. Examples of investigations can include:

(if they would apply these -again- to all of the border issues, they really should provision good horses and a six-gun to rangers in addition to the faster and regular gear, just to keep to the spirit of the force).