China has inked a new deal with leaders in Latin America and the Caribbean to deepen ties across almost all areas of society in what one analyst likened to a plot to 'take over' the region.

As part of the deal, Beijing has committed to supplying the region with 'civilian' nuclear technology, helping to develop 'peaceful' space programmes, building 5G networks of the kind Washington warns will be used to spy on people, and to pumping in cheap loans and financing for 'elaborate development plans.'

China has even pledged to build schools and fund classes teaching Chinese language and 'culture', though such institutions have been criticised elsewhere for pushing state propaganda and limiting academic freedom.

It comes off the back of decades of Chinese investment and development in Latin America and the Caribbean which has seen hundreds of billions of dollars poured into the region to build critical infrastructure such as ports, roads, and power plants in what many believe is an attempt to buy power and influence in America's back yard.

'There are absolutely ambitions for China to become the dominant influence in Latin America,' Mateo Haydar, a researcher at the Heritage Foundation said off the back of the latest deal. 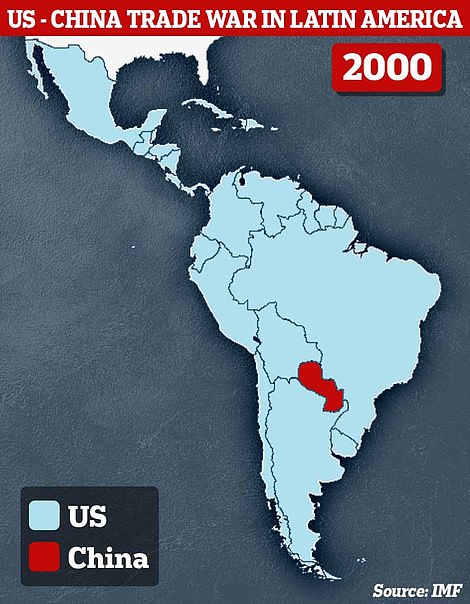 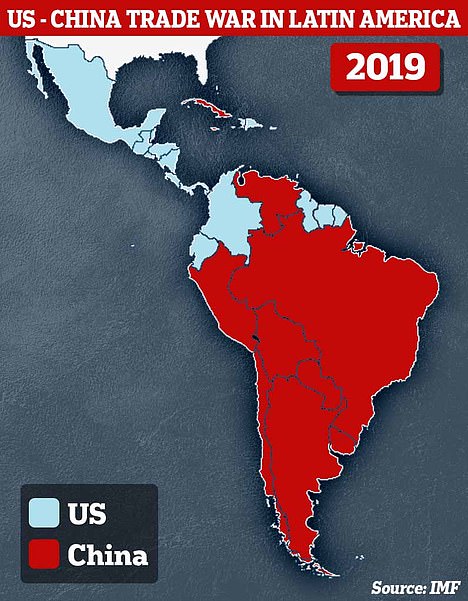 Country leadership steals most of the money, sets up accounts in the Caymans or Switzerland and when things get rough, they bounce. Just like they do in Africa and elsewhere.

Colonialism ... with a side of spring rolls.

Build networks and power structures that they control from China.

Maybe all those “refugees” will start going to China.

This doesn’t even mention where it started: with Chinese company Hutchison-Whampoa taking over both ends of the Panama Canal after Jimmy Carter sold us down the river by terminating the Panama Canal Treaty. That was nearly 30 years ago. Ask me how I know...

So that’s why all the “latinos” are sneaking into America. To make room for the Chinese south of the border.

China started their move during Carter’s administration when Jimmmmy sold them the Panama canal, now we know why they bought it. Seems CCP is going to surround the USA and control our bordering sea lanes and end up choking the USA and we are already paying them to do it. Buy American.

We spent tons of money and resources on Central and South America from 1950 - 1990 to keep the communists out of the hemisphere, and outside of a few hotspots the investment was cheaper than real conflict.

From 1990 - 2020 we spent an equal amount on the War on Drugs, to keep the drug cartels out of the hemisphere, and outside of a few hotspots the investment was cheaper than real conflict.

From 2021 - whenever we will spend a equal amount on the War on China, to keep free market capitolists escaping china out of the hemisphere, and outside of a few hotspots the investment will be cheaper than real conflict.

Asian investment is subject to recall in a way we dont see in the west. One day all of China held assets will be on a fire sale and picked up by the same players selling away the rights today.

Mostly being financed with the money our profit greedy businesses sent them. Big Guy get his 10 percent?

There are many who say yhat your prediction is what happened to Japan after the ‘87 Crash. Japan had been buting and investing in companies and real estate in the US. Comes the crash they lose billions and sell off to the people they sold to for quarters on the dollar. But the ChiComs presumably learned from that mistake.

Everything becomes a ‘growing threat’ when you have no leadership.

Same as we’re doing with Ukraine and Eastern Europe or Japan/Taiwan.

It’s concerning to be sure and makes one wonder how many Chinese “spies” were letting in with the “refugees”.

But it’s South America - communists are going to communist.

Nooo - this isn’t colonialism! This is socialist Utopianism and helping the poor you fascist!

Thanks for posting this reality:

Colonialism ... with a side of spring rolls.

How did that Colonialism workout for the UK/Spanish and Germans in the new world and even the old world?

Maybe colonialism will work better for the Chinese than it did for Europeans.

I think the Chinese approach is much more effective than the American approach of US sponsored coups, attempted assassinations, sanctions of food, fuel, and medicine.

Pretending Juan Guaido is President of Venezuela, and having our corrupt British counterparts hand over 2 billion dollars in Venezuelan gold to Guaido is just such an affront to common sense, and an egregious example of a failed policy.

The seizing of oil tankers by the US when they are delivering fuel to countries targeted by the US for regime change.

I am not sure who the geniuses are who can’t seem to change the USA playbook, but it’s not working.

19 posted on 01/03/2022 9:07:54 AM PST by sockmonkey (Conservative. Not a Neocon.)
[ Post Reply | Private Reply | To 3 | View Replies]
To: sockmonkey
My take from yesterday concerning China's global aggressive actions in the context of the current threat against Ukraine:

The critical national interest of the United States is to survive the multifaceted, sinister, tentacled threat posed by China. So our policy respecting Ukraine, NATO, the European Union, the Baltic states, Finland and Sweden-and all other hotspots around the world including Iran and North Korea – should be based on preserving our own national survival.

That does not mean that we have no interest in a healthy and robust NATO, if one could be fashioned, or in an economically vibrant and independent European Union if those nations could realistically be counted as allies. It does mean that America needs allies because China is picking up client states very rapidly.

Yet it may not seem so at first glance to much of our nation but America is rapidly running out of friends and allies around the world even as China rapidly accumulates client states. The Chinese Belt and Road initiative has insinuated Chinese influence into well over 100 foreign nations, many of them in South America and the Caribbean, on the West Coast of Africa but all within the critical maritime crossroads famously identified by Admiral Mahon and all readily convertible into military bases for the projection of power.

The Chinese-Russian axis is now overt and the Iranians are also on board. China is rapidly gaining positions in which they will be able to control sea lanes and they will also have boots on the ground enabling them to extract minerals, foodstuffs and petroleum upon which they are growing increasingly dependent and for which they will soon become desperate. Combine the vast population of China with the vast geographical expanse of Russia, add the raw materials available in that continent and a world superpower can easily emerge that dwarfs the United States.

Chinese ability to innovate is growing exponentially as we have seen in their ability to fashion hypersonic rockets and killer satellites. They are increasingly sophisticated in waging cyber warfare, which they do on a daily basis. Their navy is bigger than ours. The cold hard truth is that China is beating us and we as a nation are oblivious to the extent and immediacy of our danger.

There is every reason to fear that a move against Taiwan, predicted at least once already on this thread, might be coordinated with a move against Ukraine and we would have nothing with which to reply except kinetic warfare waged by our feckless and demented commander-in-chief. This is a threat which we were among the first to raise here. But the point is that Biden has failed to mobilize any state in the European Union, in NATO, or effectively in the Pacific (emphasis on "effectively"),either military or economic with which to deter overt military aggression by Russia or China.

Neither nation when it invades Western Ukraine or Taiwan has reason to conclusively fear that they will be utterly isolated from political, diplomatic and economic relations with the rest of the world. In other words, neither Russia nor China have been put on notice which they are bound to believe that they will bankrupt themselves even as they win two pyrhicc victories. Where is the organized deterrence?

So we have no leverage, no deterrence, against these countries because we have no unity within the ranks of our putative allies since we lost over time our credibility now confirmed by the great skedaddle from Afghanistan.

If there are incursions against Ukraine or Taiwan, or elsewhere, the dominoes will begin to fall in the wake of another American humiliation as we are exposed to be utterly feckless. If Taiwan goes, the Philippines will inevitably go. Indochina comes under threat. Japan will have very hard choices to make and the Japanese must make them with no confidence either in American fortitude or the American nuclear umbrella.

If Ukraine goes, disintegration of the Western European states is likely as the Germans decide that they would like to trade Mercedes-Benz automobiles for gas with which to heat their homes because they have just shut down there remaining nuclear plants. God help Poland who still carries nightmares of its history of its unfortunate geographical situation on the doorstep of both Germany and Russia.

After our allies desert the United States because we are further humiliated, proven untrustworthy and impotent, we will inevitably be drawn back into fortress America. It is then that we will learn that two great oceans are simply not enough protection in the modern age. As the belt of the belt and road inexorably constricts our economy and threatens us with increasingly overwhelming military odds, including nuclear war, the left in America will simply surrender us and hand us over.

The disintegration has to stop somewhere. That is not a half-assed justification for belligerency on behalf of Ukraine or for Taiwan but it is a plea that we as a nation recognize the mortal peril posed by China, consider its relationship to places like Ukraine, and adopt a realpolitik counter policy on every level that permits our own economic survival, our technological survival, our allies to believe, our leftists to be ignored and our enemies to be intimidated.