Another Canard: No, Ron DeSantis is not creating a private army to take over America. You'd never guess the truth if you relied solely on the mainstream media
American Thinker ^ | 12/04/2021 | Andrea Widburg

State guard forces are nothing new and nothing exciting.  Indeed, even Wikipedia has an honest and temperate description of them.  It explains that they are military units that operate under the aegis of the given state's governor.  Unlike a state's national guard forces, they cannot be federalized.  (You may recall how the Democrats called National Guard forces to D.C. in January so there'd be someone there to witness the inauguration of our current [p]resident.)

State guards, writes Wikipedia, have a long and honorable history in America (hyperlinks and footnotes omitted):

From its founding until the early 1900s, the United States maintained only a minimal army and relied on state militias to supply the majority of its troops, with the training and readiness of the latter varying widely. As a result of the Spanish–American War and the performance of the militias and other volunteer units during that conflict, Congress was called upon to reform and regulate the training and qualification of state militias. In 1903, with passage of the Militia Act of 1903, the predecessor to the modern-day National Guard was formed. It required the states to divide their militias into two sections. The law recommended the title "National Guard" for the first section, known as the organized militia, and "Reserve Militia" for all others.

Wikipedia even has a graphic, reproduced below, showing those states that have active forces (green) and those with inactive forces (red).  As you can see, Florida's force has been inactive, but both New York and California have active guards:

If sanity were abroad in America, most people would sagely nod and say, "Well, that sounds like a fine, sensible idea, perfectly in keeping with American pattern and practice over the centuries." But sanity has left these shores, and leftists, many of whom should be assumed to know better, promptly announced that DeSantis was setting up a private army to take over America.
1 posted on 12/04/2021 7:00:09 PM PST by SeekAndFind
[ Post Reply | Private Reply | View Replies]
To: SeekAndFind

sanity has left these shores, and leftists, many of whom should be assumed to know better, promptly announced that DeSantis was setting up a private army to take over America.

Too bad.
Ron De Santis taking over the US could only make things better...

In the seventies and at least early 80's were mostly out of state college students who then got in state tuition rates.

They were and are held in reserve for natural disasters.

They are in direct control of the Governor of Texas.

In the 70's they could get their own vehicle license plate that said Texas State Army...Pretty cool back then.

All leftists are evil. 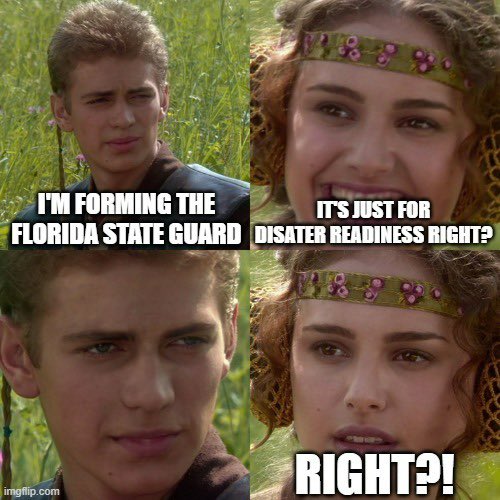 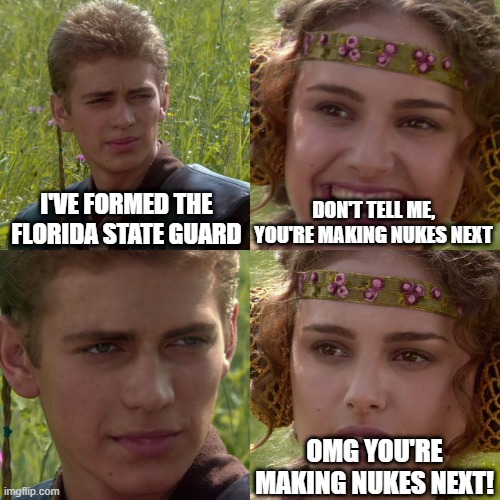 Thanks for posting. In my world, Andrea Widburg is up there with Victor Davis Hanson.

Nice posts! What were the chances of that?

Joe: heads up, FL taking over the country now.

No, but Pelosi, Obama, and Soros are.

Who was it that said, "Accuse the enemy of what you are doing", or something like that?

They might actually learn how to put up a fight. Lawsy! 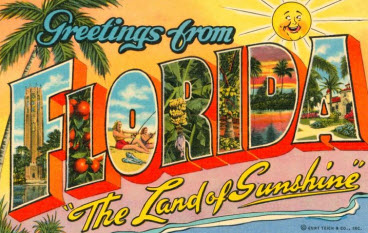 History is racist, doncha know?
Or it has been perverted by things like the 1619 Project.
And in school they teach social studies instead of history.

1984 was supposed to be a warning, not an instruction manual.