Attorney General Merrick Garland’s Message To Concerned Parents Is Clear: Shut Up Or Else
The Federalist ^ | October 22, 2021 | John Daniel Davidson

Attorney General Merrick Garland’s Message To Concerned Parents Is Clear: Shut Up Or Else

What do you call it when the country’s largest school board association secretly coordinates with the Biden White House before issuing a formal request that the administration use the FBI to investigate dissenting parents as potential “domestic terrorists,” and then, five days later, the Justice Department issues a memorandum to the FBI to do just that?

The old-fashioned word for it is corruption — corruption of our institutions, the rule of law, the administration of justice, the separation of powers. It is also an egregious abuse of power on the part of the Biden administration, which apparently has no qualms about calling on Attorney General Merrick Garland when the president’s political allies need a little muscle.

In a contentious congressional hearing on Thursday, Garland confirmed that the basis of his Oct. 4 memorandum, which directed the FBI and U.S. attorney’s offices to launch a task force to combat what Garland called a “disturbing spike in harassment, intimidation, and threats of violence against school administrators, board members, teachers, and staff,” was a letter that the National School Boards Association (NSBA) sent to the White House on Sept. 29.

That is, Garland’s evidence that there’s a “disturbing spike” in these kinds of threats is the NSBA letter itself, which was produced after weeks of collaboration with Biden’s White House. This is the same letter in which the NSBA urged the Biden administration to use tools like the Patriot Act to target parents who show up at school board meetings to complain about mask mandates and critical race theory curricula, as if they were “domestic terrorists.”

We are left to understand then, that the role Garland envisions for the DOJ in all of this is — what? His memo cites no instances of violence or threats of violence against school board members, and Garland himself admitted before Congress that the basis of his memo was the NSBA letter.

But the vast majority of incidents cited in the NSBA letter didn’t involve attacks or threats of any kind. A few cases involved local law enforcement, but nothing cited in the letter comes close to “domestic terrorism” or anything that would justify the involvement of the FBI or the DOJ. For the most part, the letter cited cases in which parents disrupted school board meetings by protesting, often because they were not given an opportunity to speak out on issues that directly affect the education of their children.

The letter of course didn’t cite instances where school board members have threatened parents, Like this one:

A school board member physically attacked a parent at a school board meeting after the parent raised concers over the mask mandate pic.twitter.com/KzN477UDDJ

To be clear, the DOJ has no role whatsoever in policing the interactions of parents and local school boards. Whatever happens at those meetings, however contentious they might get, they are entirely under the purview of local and state authorities. For Garland to even suggest that federal prosecutors might get involved is itself a scandal and an egregious abuse of power.

That’s what this is really all about. Set aside the details of the machinations between the Biden White House and the NSBA and the DOJ. What it comes down to is a coordinated effort by the left — including the most powerful law enforcement official in the country, the attorney general — to intimidate parents into silence.

Want to show up and speak out at your local school board meeting? Maybe hold a protest sign in the parking lot? Well then, you might just get a knock on your door from the FBI. Better think twice about that.

These are parents who have every right, by God and the U.S. Constitution, strenuously to voice their opposition to mask mandates, critical race theory, transgender ideology, and all the other nonsense that woke school boards and teachers are trying to foist on their kids. In fact they have a duty to do so.

But instead of listening to the concerns of such parents, the top brass at the NSBA decided to call in a political favor to the White House, which in turn let loose the Justice Department. Through it all, the corporate media executed a PR campaign on behalf of Biden and the school boards.

And why are they trying to intimidate parents into silence? Because when all’s said and done, the leftist ideologues who sit on school boards, work in the White House, and push paper for Garland’s Justice Department don’t want parents to have a say in how public schools are run and what children are taught. As far as they’re concerned, your children don’t belong to you, and their education is not your concern.

The message from the left is clear: comply, stay quiet, and maybe, just maybe, we’ll leave you alone. For now.

This is why my kids are not in public schools.

One of Reagan’s mistakes was not removing Carter’s Dept. of Ed. It has now completely metastasized public schools into left-wing indoctrination centers.

Every time Garland spoke his voice quivered. To me that’s a sure sign he’s lying.

Der uberfuhrer thinks he’s running the Einsatzgruppen. Maybe he is.

..... IMHO There should be FELONY indictments in this action by Garland!

After receiving the request for it from a radical leftist organization.

Rep. Jim Jordan (OH) told Merrick in the hearing yesterday that Republicans had sent the DOJ thirteen informational requests. There was no response to five. Responses to the others took weeks and months. Yet the marxist school board organization gets what they request in just FIVE days!

The Biden/Harris era of repression seems like it’s been going on for years but it’s only part of 2021.

RICO - Arrest them all

Wish one of themgop woild have said “either show us verifiable acts of domestic terrorism recorded by police in relation to crt opposition, or withdraw your illegal hound dogs! You have NO business treating soverieng citizens of the US like,this, NONE! If you continue, we will pursue, egal action against you and everyone Involved in this when we take the house in 2022, and we will not rest until, justice is Done. You have no business treating united States citizens this way, none!

He is using threats and intimidation, under his own rule he should be charged himself. 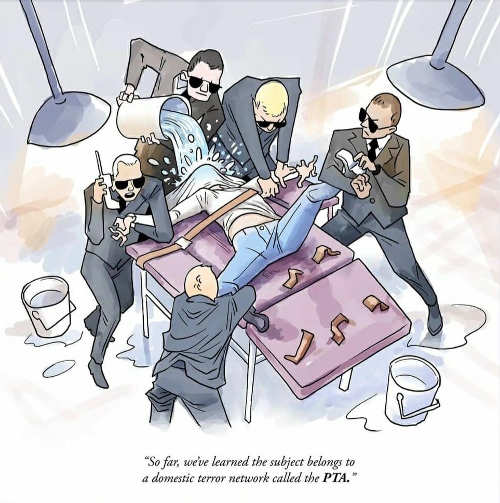 The corrupt Brandon administration has turned the “justice” department and the fbi into an American version of the KGB. Both are totally corrupt.

The Robinsons deserve our thanks and maybe a donation.

They are up against it.

It is going to be a very long three and a half years.