Border Patrol documents show at least 160,000 illegal immigrants have been released into the country under the Biden administration with little oversight, monitoring, or risk for deportation — and have even been granted a level of legal status through temporary work permits — according to a new report.

Of particular concern to former Border Patrol Chief Rodney Scott is that the documents show an abuse of the Biden administration's parole authority, which can be used to grant work permits to illegal immigrants.

"By law and regulation, a parole shall only be granted on a case-by-case basis and only for significant humanitarian reasons or significant public benefit," Scott told Fox News after reviewing the documents. "Neither of these appear to apply to the current situation."

"As a field chief, I don't believe I ever approved more than 5 or 10 paroles in a year," Scott, who was forced out of his role earlier this summer by the Biden administration, told Fox News. "When I did, I ensured that the alien was monitored continuously and was detained or removed as soon as the circumstances allowed."

The documents also show 94,570 illegal immigrants have been released into the country with Notices to Report, which would require a migrant to check in with Immigration and Customs Enforcement when they resettle into the U.S., according to the report.

This will help those employment numbers. 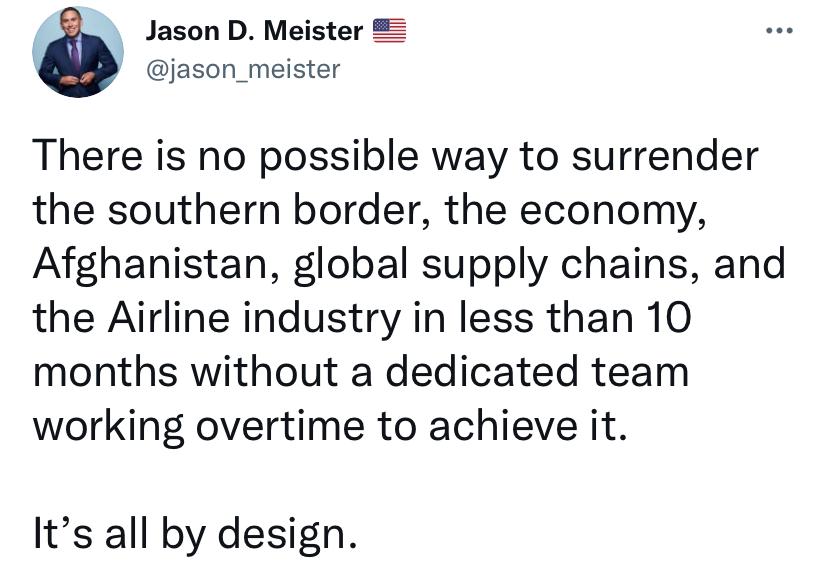 Where are McConnell and McCarthy?

Neither Homeland Security nor the DOJ give a fig.

One Month After Biden Announced his Federal Vaccine Mandate!
It Still Has Not Been Formally Issued!

One month after the Biden administration announced a draconian federal vaccine mandate that impacted an estimated 100 million Americans and led to mass firings of public servants, teachers, and medical workers, the federal regulation still has not been formally issued.

Biden’s so-called vaccine mandate doesn’t exist — at least, not yet. So far, all we have is his press conference. No such rule even claiming to be legally binding has been issued yet.

That’s why nearly two dozen Republican attorneys general who have publicly voiced their opposition to the clearly unconstitutional and illegal mandate haven’t yet filed suit against it, the Office of the Indiana Attorney General confirmed for me. There is no mandate to haul into court. And that may be part of the plan.

According to several sources, so far it appears no such mandate has been sent to the White House’s Office of Information and Regulatory Affairs yet for approval. The White House, the Occupational Safety and Health Administration (OSHA), and the Department of Labor haven’t released any official guidance for the alleged mandate.

There is no executive order. There’s nothing but press statements.

Despite what you may have been . . . led to believe by the media, . . . press releases/statements have exactly zero legal authority.

“There is nothing there yet that gives employers any mandate,” Stephanie McFarland, spokeswoman for the Indiana Occupational Safety and Health Administration, told The Federalist’s Joy Pullman on Oct. 6. “The president made an announcement on this asking OSHA to do it, but we’ve not yet seen anything come from it yet,”. When the state agency gets any further information, she said, they’ll review it.”

8 posted on ‎10‎/‎12‎/‎2021‎ ‎3‎:‎35‎:‎00‎ ‎PM by Grampa Dave (Lockdowns will go down as one of the greatest peacetime policy failures in modern history! Cui bono?)

Back to this later...
Got to borrow one the wife’s Metoprolol pills to get my blood pressure back down...

13 posted on 10/14/2021 12:29:40 AM PDT by SuperLuminal (Where is another Sam Adams now that we desperately need him?)
[ Post Reply | Private Reply | To 1 | View Replies]
To: SeekAndFind
The suffering restaurant industry is taking advantage of the illegal surge and hiring lower-paid Mexican cooks. Ever wonder why everything tastes too spicy?

Hotter climates naturally acquire a hotter-tasting cuisine, possiby because of loss of appetite with hot weather, and that is fine, but once the palate gets used to it, everything else tastes bland. Thus our pepper-deprived cuisines are eventually out the window.

This may seem minor with all the larger problems of illegal visitors, but it is just one more destruction of our culture.

Restaurant managers won't even tell you that they have a Mexican cook for fear that you are a snitch and will report them as hiring an illegal.

1. Get Americans fired from their jobs for not getting vaccinated.

2. Cause a shortage of American workers.

But just think of all the new foreign-food places we can enjoy!

If I walked into a medium to expensive restuarant and saw a Mex or foreign cook unless it was an Italian type with an Italian cook, I’m gone.

If Biden instantly legalizes them then there is no more illegal immigration. Can’t wait for Psaki to spin it this way.