Millions of retirees on Social Security will get a 5.9% boost in benefits for 2022. The biggest cost-of-living adjustment in 39 years follows a burst in inflation as the economy struggles to shake off the drag of the coronavirus pandemic.

The COLA, as it's commonly called, amounts to $92 a month for the average retired worker, according to estimates released Wednesday by the Social Security Administration. That marks an abrupt break from a long lull in inflation that saw cost-of-living adjustments averaging just 1.65% a year over the past 10 years.

With the increase, the estimated average Social Security payment for a retired worker will be $1,657 a month next year. A typical couple’s benefits would rise by $154 to $2,753 per month.

But that's just to help make up for rising costs that recipients are already paying for food, gasoline and other goods and services.

“It goes pretty quickly,” retiree Cliff Rumsey said of the cost-of-living increases he's seen. After a career in sales for a leading steel manufacturer, Rumsey lives near Hilton Head Island, South Carolina. He cares at home for his wife of nearly 60 years, Judy, who has advanced Alzheimer's disease. Since the coronavirus pandemic, Rumsey said he has also noted price increases for wages paid to caregivers who occasionally spell him and for personal care products for Judy.

The COLA affects household budgets for about 1 in 5 Americans. That includes Social Security recipients, disabled veterans and federal retirees, nearly 70 million people in all. For baby boomers who embarked on retirement within the past 15 years, it will be the biggest increase they've seen.

Among them is Kitty Ruderman of Queens in New York City, who retired from a career as an executive assistant and has been collecting Social Security for about 10 years. “We wait to hear every year what the increase is going to be, and every year it's been so insignificant,” she said. “This year, thank goodness, it will make a difference.”

Ruderman says she times her grocery shopping to take advantage of midweek senior citizen discounts, but even so price hikes have been “extreme.” She says she doesn't think she can afford a medication that her doctor has recommended.

AARP CEO Jo Ann Jenkins called the government payout increase “crucial for Social Security beneficiaries and their families as they try to keep up with rising costs.”

Policymakers say the COLA was designed as a safeguard to protect Social Security benefits against the loss of purchasing power, and not a pay bump for retirees. About half of seniors live in households where Social Security benefits provide at least 50% of their income, and one-quarter rely on their monthly payment for all or nearly all their income.

“Regardless of the size of the COLA, you never want to minimize the importance of the COLA,” said retirement policy expert Charles Blahous, a former public trustee helping to oversee Social Security and Medicare finances. “What people are able to purchase is very profoundly affected by the number that comes out. We are talking the necessities of living in many cases.”

This year’s Social Security trustees report amplified warnings about the long-range financial stability of the program, but there’s little talk about fixes in Congress with lawmakers’ attention consumed by President Joe Biden’s massive domestic legislation and partisan machinations over the national debt. Social Security cannot be addressed through the budget reconciliation process Democrats are attempting to use to deliver Biden’s promises.

Social Security’s turn will come, said Rep. John Larson, D-Conn., chairman of the House Social Security subcommittee and author of legislation to tackle shortfalls that would leave the program unable to pay full benefits in less than 15 years. His bill would raise payroll taxes while also changing the COLA formula to give more weight to health care expenses and other costs that weigh more heavily on the elderly. Larson said he intends to press ahead next year.

“This one-time shot of COLA is not the antidote,” he said.

Although Biden’s domestic package includes a major expansion of Medicare to cover dental, hearing and vision care, Larson said he hears from constituents that seniors are feeling neglected by the Democrats.

“In town halls and tele-town halls they’re saying, ‘We are really happy with what you did on the child tax credit, but what about us?’” Larson added. “In a midterm election, this is a very important constituency.”

The COLA is only one part of the annual financial equation for seniors. An announcement about Medicare’s Part B premium for outpatient care is expected soon. It’s usually an increase, so at least some of any Social Security raise goes for health care. The Part B premium is now $148.50 a month, and the Medicare trustees report estimated a $10 increase for 2022.

Economist Marilyn Moon, who also served as public trustee for Social Security and Medicare, said she believes the current spurt of inflation is an adjustment to highly unusual economic circumstances and the pattern of restraint on prices will reassert itself with time.

“I would think there is going to be an increase this year that you won’t see reproduced in the future,” Moon said.

Policymakers should not delay getting to work on retirement programs, she said.

“We’re at a point in time where people don’t react to policy needs until there is a sense of desperation, and both Social Security and Medicare are programs that benefit from long-range planning rather short-range machinations,” she said.

The financing scheme dates to the 1930s, the brainchild of President Franklin D. Roosevelt, who believed a payroll tax would foster among average Americans a sense of ownership that would protect the program from political interference.

That argument still resonates. “Social Security is my lifeline,” said Ruderman, the New York retiree. “It's what we've worked for.”

Great. Now Grandma might have just enough to put that down payment on that Thanksgiving day Turkey she’s been wanting.

Pretty much wiped out by the “real” inflation rate since Biteme took office.

3 posted on 10/13/2021 8:57:12 PM PDT by CatOwner (Don't expect anyone, even conservatives, to have your back when the SHTF in 2021.)
[ Post Reply | Private Reply | To 1 | View Replies]
To: MNJohnnie
Great. Now Grandma might have just enough to put that down payment on that Thanksgiving day Turkey she’s been wanting.

Why would grandma want to celebrate a holiday that glorifies the oppressors who invaded America and destroyed the cultures of the indigenous people?! What a horrible idea!

Yes, and how much does it cost now to fill up your car at the gas station? Or buy a sack of groceries?

The foodstampers just got a 27% increase. Why are they getting more than those that actually paid in?

This keeps up every elderly person in America will be in a soup line along with anyone else that gets social security.

Part A Medicare will go up 90 dollars though.

So.... how to destroy the system... overload it... These bastard are doing this just for fun... this is Cloward/Piven strategy. ... https://conduitforaction.org/the-cloward-piven-strategy-orchestrating-a-crisis-so-government-can-solve-it/

1. It will not slow inflation and will only partially compensate for inflation, the less so for seniors with pension incomes besides social security that do not have a COLA.

2. It will bring closer the date when social security will be insolvent.

3. Rising FICA taxes on the working will only add to income being taken away from them, no different than inflation does, continuing to make many “middle class” seniors in better financial shape than young “middle class” workers, paying higher income and higher FICA taxes, to support benefits promised to seniors but for whom NOTHING was saved and invested for it (just treasury IOUs, which in order to give social security cash must have funds taken from general taxes to do so, unless there can be an infinite expanding national debt.

...and then Medicare swoops in and claims most of it in their annual increase. That’s what happens to my Mom, without fail. It’s a shell game where the govt gets to keep most of the money. A-holes. 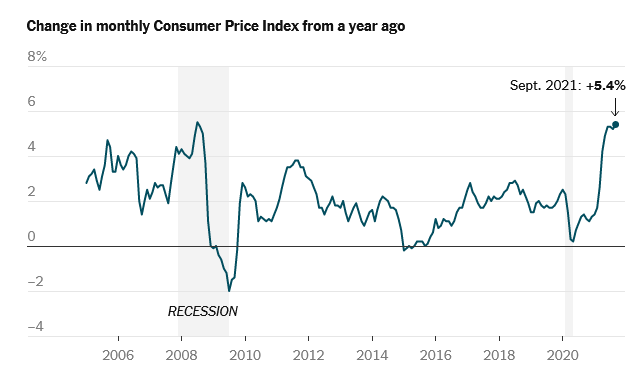 6% has already been surpassed, what normally cost for 2 Seniors a week has DOUBLED. NOT TO MENTION THE MEDICARE INCREASE THAT COMES WITH IT.

Oh yeah, so much reminds me of the stories of old Russia, boiling beets and eating raw potatoes in some home with a broken heater, no running water and a single clogged toilet down the hell.

No one goes to the hospital because the doctors are mere slaves, over worked, no supplies.

Yup, I have a friend who almost died twice I. Canada because the system was so over run that they couldn’t fit him in for emergency surgery. Emergency crew found him on the floor basical,basically, dying, when someone called for someone to check,on him. They finally did the operation, and he suffered from infections, and again thye kept sending him home without being seen because they couldn’t fit him in to be seen.

I agree, things are gonna get bad here too if liberals take over. They mess everything up