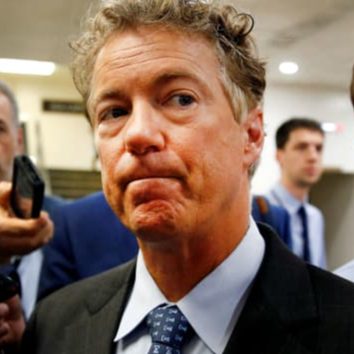 In a statement on Tuesday, Paul said that the social media platform removed a video of him being interviewed by a Newsmax journalist on the topic of science behind mask-wearing.

The senator explained that Youtube told him that the video violated their policy, saying that they don’t allow videos “that contradict government's guidance on COVID,” where he claimed Youtube, a private entity company, is acting “like an arm of the government.”

“YouTube may be a private entity, but they're acting like an arm of the government censoring those who present an alternative view to the science deniers in Washington,” Paul said.

Paul also shared a Rumble.com link to his censored video to viewers, also posting his latest message on the video streaming service.

“Censorship by YouTube is very dangerous as it stifles debate and promotes groupthink where the “truth” is defined by people with a political agenda,” Paul said. “If you want uncensored news, go to Rumble.com.”

Paul’s statement comes amid him being one of the few lawmakers in Congress calling out the nation’s leading top infectious disease expert Dr. Anthony Fauci, saying that he lied to the public about the Wuhan lab leak and the effectiveness of mask-wearing.

The U.S. is suffering through another wave in the COVID-19 pandemic, as the highly contagious delta variant of the virus is causing a rise in cases mostly that is hitting unvaccinated people the hardest.

More people should be posting their videos to Rumble.

I have watched several Youtubers. I sent them messages asking them to relocate to Rumble.

YouTube is acting like an arm of the Democrat Party, not the government. If Trump was still in the White House and the Republicans controlled both houses of Congress, YouTube would still be doing this.

The problem here is more complicated than YouTube acting on behalf of the government to stifle free speech, which is a clear First Amendment violation. The problem here is that YouTube/Google, Facebook, Instagram and Twitter are left-wing political entities which also happen to control all digital communication in the Western world.

Maybe Youtube needs to be expunged from the innernets.