I wish my last name were Biden. I could do anything and get away with it.

We had news about a Biden investigation in October 2020 concerning his foreign interest emails with China and a 2019 FBI money laundering probe. Still, the Big Tech companies did all they could to suppress it.

Hardly anyone talked about it until Hunter Biden announced the U.S. Attorney’s Office in Delaware opened an investigation into his tax affairs.

Biden announced it on December 9, 2020, a month after his daddy won the election.

We had Big Tech suppressing the news before the election, but it looks like the U.S. Attorney’s Office had a hand in it, too.

Politico reported U.S. Attorney David Weiss stalled the Biden investigation to keep it out of the 2020 presidential election:

Last summer, federal officials in Delaware investigating Hunter Biden faced a dilemma. The probe had reached a point where prosecutors could have sought search warrants and issued a flurry of grand jury subpoenas.

Some officials involved in the case wanted to do just that. Others urged caution. They advised Delaware’s U.S. Attorney, David Weiss, to avoid taking any actions that could alert the public to the existence of the case in the middle of a presidential election.

“To his credit, he listened,” said a person involved in the discussions, reported here for the first time. Weiss decided to wait, averting the possibility that the investigation would become a months-long campaign issue.

Since taking office, President Joe Biden has left Weiss — a Republican appointed by Donald Trump on the recommendation of Delaware’s two Democratic senators — in place. That puts him in one of the most sensitive positions in the Justice Department, deciding how to proceed with an investigation of the president’s son that has proven politically fraught on several fronts.

“I remember thinking he’s a straight shooter, and he’s the perfect one to have it,” said Lyons, whose history with the U.S. attorney dates back to the 1980s, when he defended one of the first cases Weiss ever prosecuted. “He would just go where the evidence led him.”

Early in his career, Weiss served as a special prosecutor during a federal crackdown on bribery and extortion among Delaware politicians of both parties. Later, he helped nab a former Delaware deputy attorney general who murdered his girlfriend. A decade ago, Weiss even investigated Biden’s presidential campaign fundraising, enlisting a beer distributor to wear a wire for the FBI and record conversations with Biden’s associates.

“He’s got an appreciation,” said a former prosecutor who has worked closely with Weiss, “that there are times when the Delaware Way can turn into something more nefarious.”

Despite the supposed tough-guy approach, Weiss chose not to issue subpoenas or search warrants. He did not want to draw attention to Hunter and influence the election.

I agree with Politico: “No matter what he did, the decision was sure to come under scrutiny for signs of politicization.”

An anonymous source said: “It was a close call. That case has way more credibility now.”

Maybe. Maybe the source is correct. Biden won in November. Has Weiss made any moves lately?

I’m changing my name to Mary Biden. I could have Big Tech, the MSM, and U.S. Attorney’s Offices on my side.

TOPICS: Crime/Corruption; Government; News/Current Events; Politics/Elections
KEYWORDS: biden; bideneffect; hunter; mediabias; tax
Can we also identify and get tax returns from "The Big Guy" whoever that might be ?
1 posted on 07/30/2021 5:32:55 PM PDT by algore
[ Post Reply | Private Reply | View Replies]
To: algore

If I had smoked as much crack, snorted the lines off the road, drank as much whiskey and smoked as many Marlboros as Hunter, I would be in the morgue.

Lol. The DOJ. A Trump hire in Barr. Said he wouldn’t investigate the bidens because he didn’t want to mess with the election. Would not want the truth to come out.

At a minimum, it seems like obstruction of justice

It also is something called “conspiracy”

The Biden Crime Family is part of The Democrat Party Crime Syndicate.

Anyone who still supports the Democrats has a criminal heart.

So letting the public know the facts about a candidate is called “influencing the election” if the facts are negative for them. There is absolutely no problem leaking out facts, even falsehoods, when the candidate is a Republican. The public has a right to know everything about the candidates that effect their ability to carry out the duties of the office

Interesting, I thought Kathy Jennings is the Delaware AG... 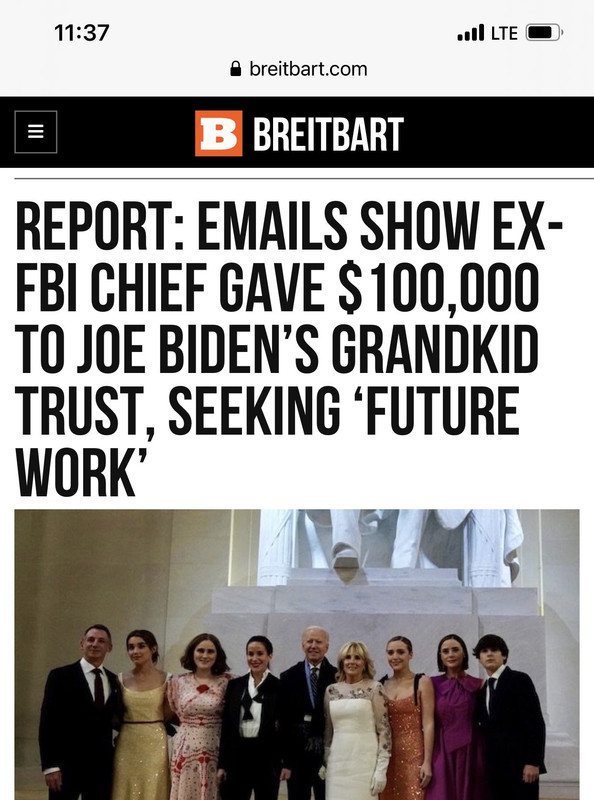 In 2010, Republican House candidate Christine O'Donnell suddenly found herself in the middle of a manufactured scandal when reporters received leaked state tax returns showing a tax lien on a house that O'Donnell previously owned.

The problem was that she owed no taxes on the home. Someone manipulated the tax records to add the lien in order to manufacture a news story to benefit her Democrat opponent Chris Coons.

After O'Donnell's election loss, the IRS apologized and said a computer "glitch" caused the erroneous lien to be added to her record, which was eventually removed.