A few weeks ago, someone sent me a recording of a talk called “The Psychopathic Problem of the White Mind.” It was delivered at the Yale School of Medicine’s Child Study Center by a New York-based psychiatrist as part of Grand Rounds, an ongoing program in which clinicians and others in the field lecture students and faculty.

When I listened to the talk I considered the fact that it might be some sort of elaborate prank. But looking at the doctor’s social media, it seems completely genuine.

Here are some of the quotes from the lecture:

This is the cost of talking to white people at all. The cost of your own life, as they suck you dry. There are no good apples out there. White people make my blood boil. (Time stamp: 6:45)

I had fantasies of unloading a revolver into the head of any white person that got in my way, burying their body, and wiping my bloody hands as I walked away relatively guiltless with a bounce in my step. Like I did the world a fucking favor. (Time stamp: 7:17)

White people are out of their minds and they have been for a long time. (Time stamp: 17:06)

We are now in a psychological predicament, because white people feel that we are bullying them when we bring up race. They feel that we should be thanking them for all that they have done for us. They are confused, and so are we. We keep forgetting that directly talking about race is a waste of our breath. We are asking a demented, violent predator who thinks that they are a saint or a superhero, to accept responsibility. It ain’t gonna happen. They have five holes in their brain. It’s like banging your head against a brick wall. It’s just like sort of not a good idea. (Time stamp 17:13)

We need to remember that directly talking about race to white people is useless, because they are at the wrong level of conversation. Addressing racism assumes that white people can see and process what we are talking about. They can’t. That’s why they sound demented. They don’t even know they have a mask on. White people think it’s their actual face. We need to get to know the mask. (Time stamp 17:54)

TOPICS: Culture/Society; Extended News; Miscellaneous; News/Current Events
KEYWORDS: antiracism; bloggers; clickbait; excerpt; hater; liberalracism; moron; racism; sociopath; white; witch Navigation: use the links below to view more comments.
first 1-20, 21-40, 41-60, 61-75 next last
Bari Weiss is no conservative; she's a liberal who used to work for the New York Times until she advocated for publishing an article the #woke left didn't like. This article on her website is an interesting discussion of issues around "antiracism."

If you believe that you know what is in the hearts and minds of all white people (or all black people, or all of any other group), or what experiences all people of that group have or have not had -- can or cannot have -- isn't that raicism?

“They feel that we should be thanking them for all that they have done for us. They are confused, and so are we.”

I’m not confused. 90% vote for the dem-o-rats and support the violent thugs of black lies matter.

IT is mental illness, and this feamle dog is mentally ill in a dangerous way..

No seeing a picture, I would guess it is 50-50 the shrink is white. She is auditioning for the position as theoritician of the Left.

The Jewish people learned this hard lesson- if someone wants to wipe your race off the face of the earth, you better take them at their word.

If we’re all that bad, how is it people such as she are still alive? It doesn’t make sense.

With substitution of anti-Jewish epithets for “white people”, the NY Psychiatrist’s lecture could pass for a Nazi diatribe. The woman’s arrogance, hatefulness, and lack of self-awareness are staggering. The worst thing about white people is allowing dangerous lunatics like this white woman to foment murder and genocide. 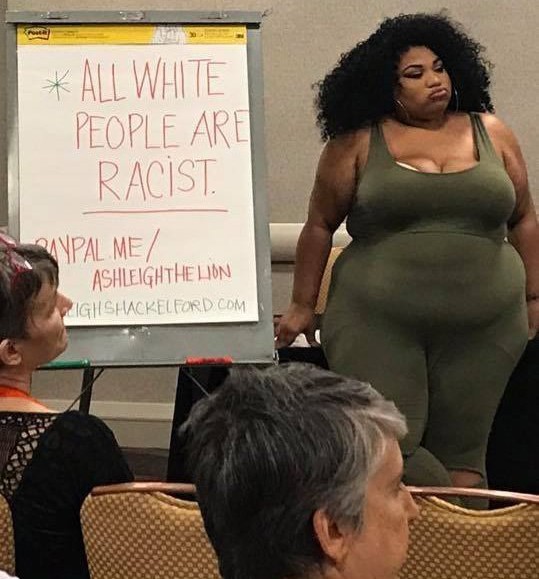 I have had an opinion for years that psychiatrists who study mental disorders are often studying themselves, or others in the field.

Yes, projection and psychopathy. This piece of murderous filth is unfit to live.

She is the daughter of Pakistani immigrants, both doctors, and was born and had a privileged upbringing in Michigan. She should remove herself to Pakistan if she is so miserable here.

You need to post a warning, some of us just ate.

Yes thats why unschooled black thugs and thuggettes are attacking and kiling white people at a 10:1 ratio or higher.

It disgusts me to have to deal with ignorant people that believe they are incredibly smart. Most liberals fall in this category, not a surprise I don’t suffer them well.

This from the Clarion Ledger about crime-ridden Jackson, MS:

“My family followed her move 25 years later due to the increasing crime. Our cars and house were constantly burglarized. It was a different day than when white residents were in the community. Crack, cocaine, heroin has been dumped for trade in many middle-class Black neighborhoods, affecting the dynamics.”

So, it was different when whitey was there? Hmmm,wonder why it changed? One wag said integration is that time period between when the first blacks move in until the last whites move out.

Pardon me, but what the heck is that a picture of? A water buffalo with a perm?

IIRC Martin Luther King Jr once suggested that people should be judged by the content of their character rather than by the color of their skin. Has this suggestion now been relegated to the trash bin?