Kamala Harris comes out of the woodwork with plan to solve all those 'root causes' of migrant surge: Her Stupidity Revealed From a Mere Two Press Questions
American Thinker ^ | 04/15/2021 | Monica Showalter

After appearing on milk carton memes from Republicans mocking her as AWOL in being Joe Biden's border crisis czar, Kamala Harris has dropped her crocheting, snacking, and home decor battles to bring herself out of the woodwork.

Wednesday, she held a press conference and Zoom-like round table on just what she plans to do about the migrant surge at the border, looking for all those "root causes."

Here are some choice bits from the White House transcript -- the first reporter's question got right to the point:

Q    Madam Vice President, will you visit the southern border.  Do you have a trip planned?  Will you plan one in the future if the situation with migration doesn’t resolve itself?

THE VICE PRESIDENT:  So, as I mentioned to the experts, the President has asked Secretary Mayorkas to address what is going on at the border.  And he has been working very hard at that, and it’s showing some progress because of his hard work.  I have been asked to lead the issue of dealing with root causes in the Northern Triangle, similar to what then-Vice President did many years ago.

But I will tell you that these are issues that are not going to be addressed overnight, in terms of the root causes issue.  A large part of our focus is diplomatic, in terms of what we can do, in a way that is about working with these countries.

So, for example: I have talked with the President of Mexico, the President of Guatemala.  We have — well, I’m probably saying too much — we have plans in the work to go to Guatemala as soon as possible, given all restrictions in terms of COVID and things of that nature.

Translation - We are doing nothing.

She’s saying too much by revealing she plans to go to Guatemala? What the heck does that even mean?

And apparently the answer is no, she doesn’t plan to visit the border.

The GOP needs to do this DAILY, mock and deride Kamala and Biden. 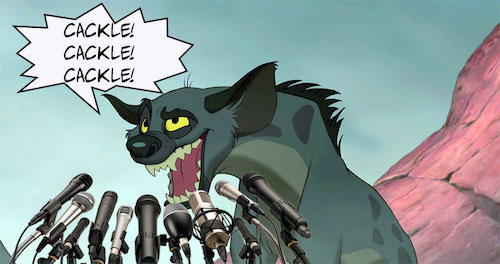 RE: And apparently the answer is no, she doesn’t plan to visit the border.

And how’s that going to go? Well, just yesterday, Guatemala’s president joined Mexico’s in laying the blame for the surge at the feet of Joe Biden. That’s some pair of meetings she’s got ahead of her.

Here’s the other thing: The president of El Salvador, another northern triangle member isn’t taking White House phone calls, having been insultingly snubbed in February on his trip to Washington by these same Bidenites. Good luck with that one, Kams.

Meanwhile, the leader of the third northern triangle member, the president of Honduras is hopelessly compromised with drug entanglements, though he has his hand out.

You ever notice that when Ms. Harris says “let me be clear” she most absolutely will not be clear. What will follow will be a stream of complete Bovine Excrement.

The anchor baby has no intention of stopping the flow.

It IS the reason her and Senile Joe were cheated into office.

Her solution is to fix Climate Change through the GND.

v.p. cackles. Proof once again that law school can’t be that hard. Even the bottom of the class is called attorney. Just look at some of the lawyers we’ve been presented with over the years. Sort of like docs. Still called doctor.

The border not to mention the escalating homelessness issue.
Especially in kahaha’s state of California.

She’s even more incoherent—less coherent?—than Biden. I didn’t think that was possible.

Don’t know about Northern, but Willie Brown spent a great deal of time at her Southern “triangle.”

Now Kamala Harris seems to be dropping her crocheting, cooking, and home decorating ......

Kamala's crotcheting, cooking, home decorating will get her b****-slapped by the femiNazis.

The Fem/libs do not want women to look in the least bit domesticated.

Whanever a sentence or an exclamation starts with the word “So” what follows is IMO... immediately suspect.

Along with that “high rising terminal” verbal punctuation.

RE: Whanever a sentence or an exclamation starts with the word “So” what follows is IMO... immediately suspect.

Who gave that rule?

“Translation - We are doing nothing.”

Translation - we need more immigrants to flood our system. Eventually we will create new dependent voters in what were once red states and turn them blue so Republicans, as dumb as they are for never addressing these issues themselves, can never get elected ever again.