A growing number of people who were approved for independent government positions must be feeling like they’re starring in a reboot of The Apprentice, with Joe Biden now playing Donald Trump’s old role. The common theme is that they all received the same message. You’re fired. Joining the list of the newly unemployed this month was Sharon Fast Gustafson, the former General Counsel for the Equal Opportunity Employment Commission. Gustafson wasn’t even two years into her four-year contract at the EEOC when she received a letter from the President requesting her resignation. She wrote back, saying that she intended to serve out her term as she had sworn to do when the Senate confirmed her in August of 2019 and Joe Biden responded by immediately firing her. This happened more than a week ago, but I only caught wind of it this weekend.

So what drew Biden’s attention to this particular EEOC official? According to NRB, it was Gustafson’s history of defending employees who were discriminated against based on their religious beliefs.

During her term, Gustafson has gained a reputation for defending religious liberty, leading the EEOC to file a lawsuit against Kroger in 2020 on behalf of two employees who refused to wear LGBT-themed aprons due to their Christian beliefs.

After receiving a request to resign as General Counsel of the EEOC on March 2, Gustafson sent a letter to President Biden on Friday stating her intent to continue filling the role of her office. She was fired from her position by 5 p.m. that evening.

“At the time I was nominated, I was asked if I would commit to do my best to fulfill my four-year term, and I answered yes,” said Gustafson in her letter. “Unless prevented from doing so, I intend to honor that commitment. I have confidently given this advice to countless embattled clients of the last 25 years: hold your head high, do your best work, and do not resign under pressure. In solidarity with them, I will follow that advice.”

So I guess this is what the new version of “unity” looks like, eh? The EEOC is supposed to be an independent agency, with officials who serve staggered terms to avoid the politicization of the organization, unlike White House staffers who are generally flushed out every time the opposing party takes office. No reason relating to any job performance issues was provided when Gustafson was asked to resign. She was simply cut loose with more than half of her term left to go.

Gustafson’s nomination wasn’t even a controversial one. On July 30, 2019, she was passed favorably from the Senate Committee on Health, Education, Labor, and Pensions. Two days later she was approved by the Senate on a voice vote.The mission of the EEOC is to enforce federal laws that make it illegal to discriminate against a job applicant or an employee based on a number of criteria, including religion. But the LGBT community clearly became upset over Gustafson doing her job and someone must have put a bug in the ear of somebody on Biden’s staff, so she had to go.

That’s what potentially makes this one of the most ironic actions of Biden’s presidency to date. A person working for the federal agency that’s responsible for protecting employees from being fired over their religious beliefs winds up being fired because parts of Biden’s base disapprove of those religious freedoms.

This is increasingly becoming a troubling pattern in Biden’s presidency. Biden previously fired the General Counsel of the NLRB in the middle of his term in a similar fashion. That action has already been challenged in court and may result in the position remaining vacant for most of the year.

The Commissioner of the EEOC (a Republican) expressed her dismay at this partisan witchhunt.

“In his inaugural address, the President said, ‘The right to dissent peaceably, within the guardrails of our Republic, is perhaps our nation’s greatest strength,’” said Lucas. “That, however, does not seem to apply to Sharon Gustafson. And if such a principle does not apply to the Equal Employment Opportunity Commission—the very agency charged with preventing and remedying discrimination and retaliation—where else does it apply?”

Joe Biden has had some very unity-themed speeches written for him this year and he’s delivered them to the thunderous applause of most of the mainstream media. Thank God we’re finally rid of Donald Trump and his “divisive” rhetoric, right? But thus far, Biden’s actions have fallen far short of his words.

TOPICS: Culture/Society; News/Current Events; Politics/Elections
KEYWORDS: conscience; dh; eeoc; genderdysphoria; homosexualagenda; religion; religiousfreedom; sharonfastgustafson; unity Navigation: use the links below to view more comments.
first 1-20, 21-33 next last
Unity is immediately thrown out the door by the Dems if any of the LGBTQ+ community complains. For the Dems, perversion takes priority over the First Amendment. Dems hate Christianity, but they love their religion of Self-expression.
1 posted on 03/15/2021 9:48:44 AM PDT by DeweyCA
[ Post Reply | Private Reply | View Replies]
To: DeweyCA

He was very upset when Bush and Trump fired people.

I think we all know the answer.

Democrats are supposed to remain in their positions, even if a Republican is elected. But if a Democrat is elected, all Republicans must go.

This is an area where DJT failed at thanks to the establishment p*icks he took advice from.

President Le Petomane isn’t firing anybody or deciding anything.

Those who put him in office decide everything.

But if a Democrat is elected, all Republicans must go.

Republicans should do the same thing, but they won’t. Too weak.

Americans would be outraged if President Trump had fired Obama appointees.

What is Joe Biden?? A King or a Dictator? He’s is acting more and more like Putin every day.

Joe Stolen has been a “foot soldier” his entire public life. So whose orders is he obeying now? The Kenyan Usurper’s? He’s not coming up with any of this stuff on his own. No way.

If you’re going to do evil it’s got to be done.

2. The Republican establishment is complicit in everything that the Biden administration is doing. They undermined president Trump for four years.

3. Conservative politicians need to be as ruthless and as cunning as the Democrats and establishment Republicans. They also need to stop supporting RINOs in state and federal legislatures.

Trump should have fired at least 10 000 Executive Branch employees/appointees on January 21, 2017, and the fact that he did not is on him.

You can’t blame Biden (or whoever is issuing him his orders) for playing the game the way it should be played.

Behind almost everything a liberal does there lurks a bit of potential upside. That’s because almost everything a liberal does is designed to create a level field (or, “equal” outcome instead of equal opportunity) for a special interest or group and that level field, or opportunity is the exact opposite of what the rest of the people in that field would call level, equal or fair. With every circumstance when this happens more people become aware of what liberals really are. And that reality is not a pretty sight.

Quite often you hear people say, “I vote for the man (gad, how sexist!) and not the party.” But voters are, I think, beginning to understand that when it comes to Democrats, there is no “man.” The candidate is just a replaceable cog in the party machine. As examples of how replaceable they are consider Minnesota Senator Al Franken, who, when the Democrats wanted to condemn Trump for something Trump had allegedly done, they had to force out Franken who had not only done worse, but posed for photos while doing so. Then, there’s golden boy New York governor Cuomo who is being removed for one sin but in order to avoid the party being besmirched for an even worse sin. 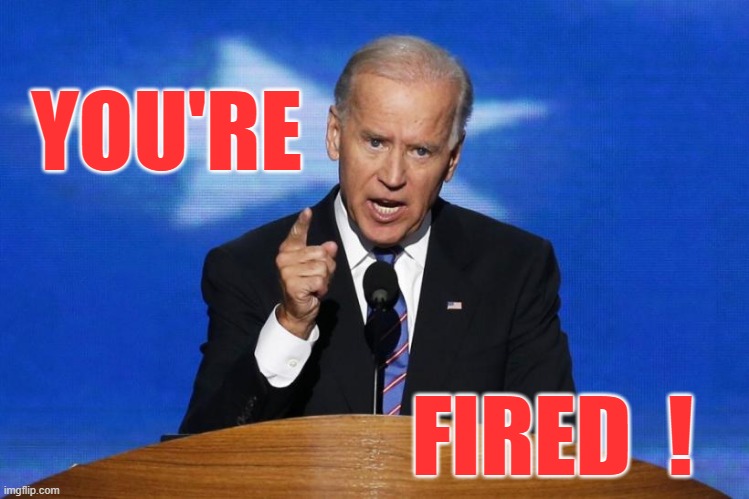 At least he’s not a meanie like President Trump?

Republicans think the media & voters will congratulate them for their bipartisanship.

The media won’t & the voters won’t pay attention or remember.

Rats don’t care. The media will cover for them and the voters aren’t paying attention and if they do won’t remember.

In many respects Rats do retail politics much bette rthen GOP’ers.

In many respects Rats do retail politics much bette rthen GOP’ers.

Absolutely right. They play the game well. Rats push relentlessly for what their voters want. They are focused and determined to achieve their objectives.

Of course it wouldn’t be that easy for them if they had a real opponent to contend with. “Our party” is toothless, weak, and feckless. In fact, we don’t have a party at all.

This is what damn near every city derivative wanted from trump. Fire every liberal he could. Unfortunately that didn’t happen.

This is the MO of all dem presidents, and, further, to have them burrowed in as civil service employees when the admin changes, so they can’t be fired.

Imitation is the sincerest form of flattery