A reported glitch in the software of Dominion Voting Systems equipment saw 6,000 votes switched from Republican to Democrat in Antrim County, Michigan on Tuesday. The county clerk caught the issue and it has reportedly been corrected. Similar glitches with the software were reported in Georgia.

“The county clerk [Sheryl Guy] came forward and said tabulating software glitched and caused a miscalculation of the votes,” Michigan GOP chair Laura Cox said. “Antrim County had to hand-count all of the ballots. And all these counties that use this software need to closely examine their results for similar discrepancies.”

The Denver-based company’s Dominion Democracy Suite 5.5 software was used in 69 counties in Michigan on Tuesday.

Dominion Voting Systems Inc. is one of three voting equipment vendors which control 88 percent of the U.S. market.

During congressional testimony in January, John Poulos, CEO of Dominion Voting Systems confirmed that the machines Dominion manufactures include components from China and noted the issue of foreign suppliers isn’t unique to the voting equipment industry.

“Several of those components, to our knowledge, there is no option for manufacturing those in the United States,” Poulos said.

Election integrity analysts have long been concerned about what is known as supply-chain security, the tampering of election equipment during manufacturing.

Bloomberg reported in April of last year that Dominion Voting Systems hired a high-powered lobbying firm that includes a longtime aide to Pelosi. They hired Brownstein Farber Hyatt & Schreck. Nadeam Elshami, Pelosi’s former chief of staff, is one of the lobbyists on the account.

In Oakland County, Michigan, a glitch in a different system switched over 1,200 Republican votes to Democrat. The switch initially caused County Commissioner Adam Kochenderfer to lose. Once the glitch was found, and the votes were properly attributed, Kochenderfer went from losing by 100 votes to winning by over 1,100. According to the Royal Oak Tribune, Oakland County uses election software from Hart Intercivic. Hart uses a proprietary system called Verity. Eleven Michigan counties use Hart’s systems.

But what observers want to know is why both glitches in Michigan switched Republican votes to Democrat despite apparently occurring in different underlying systems.

Michigan state Sen. Ed McBroom announced Friday that a joint hearing of the state’s Senate and House of Representatives Oversight committees would be held Saturday “as part of a legislative effort to ensure the integrity of our state elections.”

Voting machine manufacturers have acknowledged that some of their equipment allows for the transmission of election-night vote counts via modem, a vulnerability security experts say hackers could easily exploit.

Due to the glitches, Superior Court Judge W. Fletcher Sams extended voting until 11 p.m. on election night. The counties use voting machines made by Dominion Voting Systems and electronic poll books — used to sign in voters — made by KnowInk.

The companies “uploaded something last night, which is not normal, and it caused a glitch,” said Marcia Ridley, elections supervisor at Spalding County Board of Election, Politico reported. That glitch prevented pollworkers from using the pollbooks to program smart cards that the voters insert into the voting machines.

Ridley said that a representative from the two companies called her after poll workers began having problems with the equipment Tuesday morning and said the problem was due to an upload to the machines by one of their technicians overnight.

“That is something that they don’t ever do. I’ve never seen them update anything the day before the election,” Ridley said.

Neither Dominion nor KnowInk responded Politico’s request for comment. A spokesperson for the Georgia secretary of state’s office also did not respond to follow-up questions about who uploaded the dataset and whether it had been reviewed and tested by anyone beforehand.

Boy, you get into government and you can make bank, eh?

It’s not a coincidence that almost all of the battleground states used this suite of software and that the calls in Arizona, Michigan, Wisconsin are an indicator of how this system helped to execute the Democrat plan to steal the election. If Pennsylvania, North Carolina, and Georgia are ultimately called for Biden, this system will be the tool that made it happen.

This will go to the courts, but I doubt that the GOP have the right lawyers with the needed skills to prevail in court. This is very technical and the foresnic evidence will not be extracted by political hacks and white shoe lawyers.

The fix was in...let President Trump and America have their day in court.

November 4th isn’t the time to get worried about this. Its a little late.

Most of them probably have a ‘hastert problem’.

As a former computer geek I'd be curious to know how she figured it out.

Trump will fight, but don't expect our institutions and career politicians to help. Both political parties, the Washington establishment, and the Judiciary are quite happy with the outcome. Does anyone think that they are looking out for the American people? 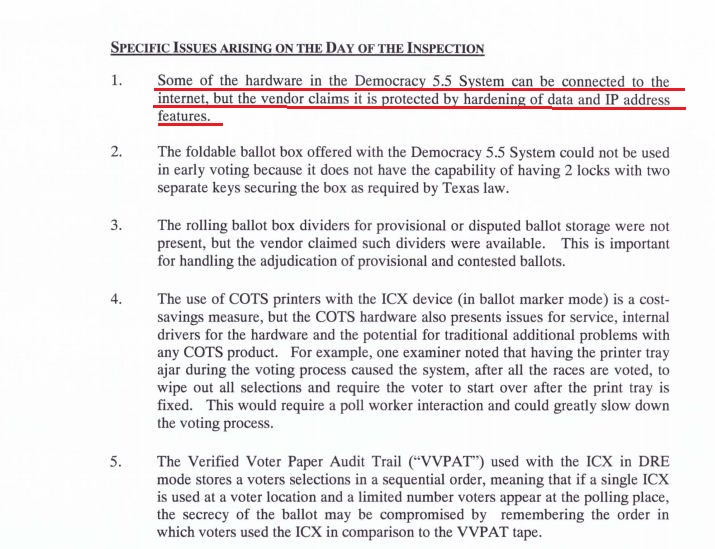 If anyone who was part of the decision-making in this project had a functioning brain cell, we wouldn’t be in this situation. Again, proof that too many Americans are incapable of rational thought and lack critical thinking skills. These jerks would drink Drano and wonder why they have an upset stomach.

If these were known facts before the election, why weren’t they brought up BEFORE the election? This isn’t complicated.

Everything the Clintons touch turns into treason.

On March 8, 2010 the U. S. Department of Justice, along with nine state attorneys general, filed an antitrust lawsuit in U. S. District Court in Washington, D.C. alleging that ES&S’ 2009 acquisition of Premier harmed competition. At the same time, the DOJ filed a proposed settlement with ES&S that required the divestiture of the Premier assets to a purchaser approved by the Department. Negotiations subsequently took place between ES&S and Dominion to execute a transaction in accordance with the DOJ’s proposed settlement, and the Department has reviewed and approved all aspects of the purchase agreement.

The Department of Justice’s Antitrust Division, along with nine state attorneys general, filed a civil antitrust lawsuit today in U.S. District Court in Washington, D.C., alleging that the transaction harmed competition. At the same time, the department filed a proposed settlement that, if approved by the court, would resolve the department’s competitive concerns. The state attorney general offices are: Arizona, Colorado, Florida, Maine, Maryland, Massachusetts, New Mexico, Tennessee and Washington.

William Earl Kennard[1] (born January 19, 1957)[2] is an American attorney who served as the U.S. Ambassador to the European Union (2009–13) and chairman of the Federal Communications Commission (1997–2001). He was nominated as ambassador to the EU by President Barack Obama in August 2009 and confirmed by the U.S. Senate in November. Prior to this appointment, Kennard was Managing Director of the global private equity firm the Carlyle Group. He was also chairman of the FCC after being appointed by President Bill Clinton in November 1997, serving from November 3, 1997 to January 19, 2001.[3] He is also an advisor for the transatlantic think-tank European Horizons.[4]

It is used in 30 states including:

Every single major swing state. EVERY. SINGLE. ONE. 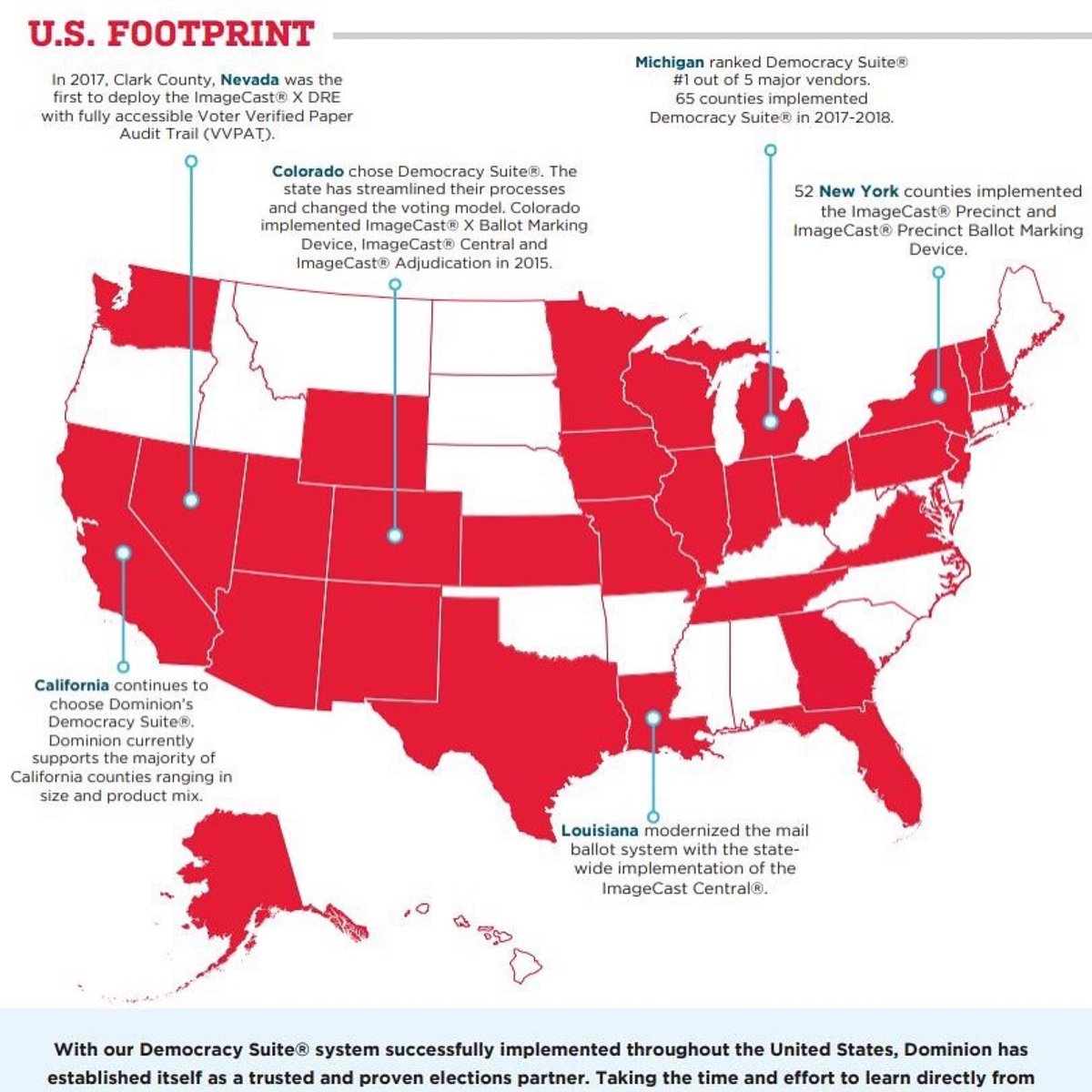 In 2014, Dominion Voting committed to providing emerging and post-conflict democracies with access to voting technology through its philanthropic support to the DELIAN Project, as many emerging democracies suffer from post-electoral violence due to the delay in the publishing of election results. Over the next three years, Dominion Voting will support election technology pilots with donated Automated Voting Machines (AVM), providing an improved electoral process, and therefore safer elections. As a large number of election staff are women, there will be an emphasis on training women, who will be the first to benefit from the skills transfer training and use of AVMs. It is estimated that 100 women will directly benefit from election technology skills training per pilot election.

I just found the same looking into it myself this morning.

The voting machines by Dominion Voting Systems are used by ALL these contested State’s. They’re not used everywhere, although in Arizona, the ONLY county to use them is Maricopa Co..

This company was part of the DELIAN Initiative by the Clinton Foundation.

The company is owned by private equity firm State Street Capital ( http://www.staplestreetcapital.com/Team ). The CEO, Hootan Yaghoobzadeh, was formerly with the Carlyle Group. This group has ties with the defense industry and has had accusations of other ties to terrorism.

“Carlyle’s 2001 investor conference took place on September 11, 2001. In the weeks following the meeting, it was reported that Shafiq bin Laden, a member of the Bin Laden family, had been the “guest of honor”, and that they were investors in Carlyle managed funds....The Bin Laden family liquidated its holdings in Carlyle’s funds in October 2001, just after the September 11 attacks, when the connection of their family name to the Carlyle Group’s name became impolitic.”

This group seems to have LOADS of influential political players (Bush’s, ...).

This could all be a nothing burger...but such machines are simple tabulators where the CORE FEATURE is to count votes, having ‘glitches’ is almost unthinkable. I’m a software engineer, there’s just no way this can happen by accident. This all happened after a software update was made A DAY BEFORE THE ELECTION.

IMO - there’s something here, along with getting rid of observers during ‘sleep time’ as Biden ONLY votes were ‘found’ and counted prior to the observers coming back, only to be locked out and windows boarded up (Detroit etc.) upon their return. If they counted votes after everyone else went home, they could have been destroying Trump votes too.

Put it all together, with media cover, and you have an unimaginable voter fraud ORGANIZATION - AS BIDEN ADMITTED ABOUT. This has to be orchestrated.