WASHINGTON (SBG) - A justice department official has confirmed to Sinclair Broadcast Group that the FBI opened up a criminal investigation into Hunter Biden and his associates back in 2019, focused on allegations of money-laundering and that the probe remains active.

Sinclair investigative reporter James Rosen has also spoken with a central witness in these allegations, which suggests that former vice president Joe Biden knew more than he has acknowledged about his son's overseas dealings.

Tony Bobulinksi was thrust into the national spotlight on the evening of the final presidential debate.

It was on that night the former business associate of Hunter Biden claimed Democratic nominee Joe Biden knew about his son taking payments from Chinese and Ukrainian companies and strongly suggested he got a kickback.

Bobulinksi discussed why he feels if elected, Biden would be compromised by the Chinese government and much more in an exclusive interview with Rosen.

The compromise they have is that in documents that have been well provided to the Senate, to Congress, to the Department of Justice via the FBI that CEFC was effectively loaning money directly to the Biden family. Bobulinksi said he was first introduced to the former vice president in May 2017 by Hunter and Jim Biden in Beverly Hills, California.

He claimed they talked about the Biden family business plans with China, despite the Democratic nominee on several occasions denying he had any involvement, including the final presidential debate when Biden said, “I have not taken a penny from any foreign source ever in my life."

During his remarks that same night, Bobulinksi displayed three phones he claimed contained evidence against the Bidens that would be turned over to the FBI.

Reporting by James Rosen via Sinclair and going out nationally such as here with CBS News in Harrisburg, PA.

🚨🚨🚨BREAKING: The FBI has an active criminal investigation into the Biden family and their business associates that is focused on money laundering. pic.twitter.com/hcuI98t1Yr— Donald Trump Jr. (@DonaldJTrumpJr) October 30, 2020 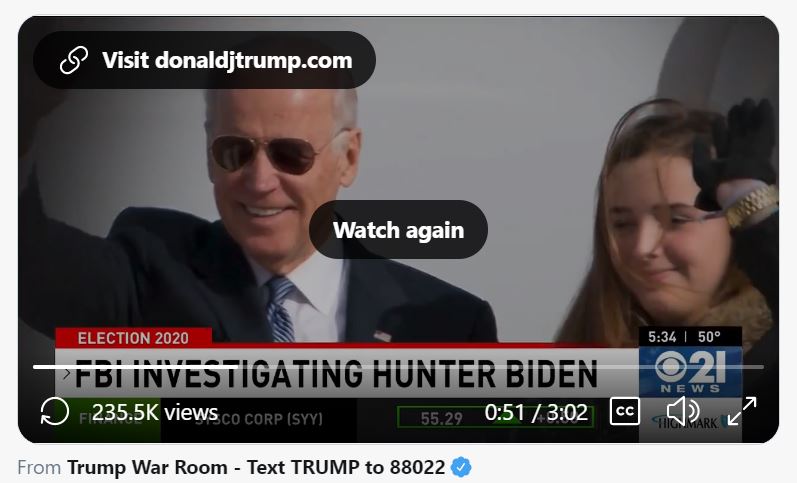 The FBI is still actively looking for Jimmy Hoffa, too.

EXCLUSIVE: Tony Bobulinski tells @WeAreSinclair he was questioned by six @FBI agents, with counsel present, for five hours on October 23, listing him as a "material witness" in an ongoing investigation focused on Hunter Biden and his associates. His cell phones were examined. pic.twitter.com/5lPzRTREJN— James Rosen (@JamesRosenTV) October 29, 2020

When one is paid by the billable hour, these things take time.

Snails move faster than the fbi.

YOU AlL have to start sharing this to facebook right now. We have to show this is starting to go mainstream even if it’s just a small start. Dos it now!

The case/investigation is “active”. That statement, in absolutely no way, means that they’re actually doing anything. They’re playing the waiting game to see who is going to win next week. Which is why the case has been open for a year or so.

If Harris wins...case disappears and things continue as they’ve been for decades.

If President Trump is re-elected then they’ll drag their feet, up and until he replaces Wray and Barr. And if, by chance, he gets some legit people in those positions, there’s a slim chance that something might happen, but no one is going to prison.

Everyone of those motherf*ckers thumbs their collective noses at us every day, as they’ve been getting away with this sh*t for decades. Confident with the knowledge that we’re not charging into the Capitol and dragging them out.

The FBIAS thought they had it buried.
They didn’t know it would get out by other means.

Yes the FBI case is still open and they are very busy covering up the crimes of JOE biden and his family coconspirators.

‘
Does anyone need to be reminded of the Fake Hillary Investigation?

All her circle were given Immunity for absolutely nothing, and the FBi said they didn’t want to see their devices, they trusted them to Wipe them.

Remember, a preservation order was in place, and Hillary sought out a service to Bleach Bit her Servers where they advertise that Criminal Investigation Detection methods could not retrieve info off the drives.

We’ve seen all this before.

It is not BIG CBS, but though local CBS affilates owned by the Sinclair Broadcast Group. I believe its owners are conservative.

So, the FBI keeps a case involving the son of the Democrat candidate for the presidency under wraps since 2019, but they spy on the Trump campaign and leak information they KNEW was false. What does that say about the FBI?

I would bet that just about EVERY federal agency is loaded from the top down with ineffectual liberal academics with little practical experience or meaningful knowledge but with an academic pedigree and an ego.

It says the FBI agents will again interview Bobulinski regarding his involvement in Hunter Biden’s business dealings. Bobulinski told this to James Rosen as part this report for Thursday. So they are doing something!