How is it possible to debate Critical Race Theory yet fail to mention its salient characteristic—that it is exclusively and ethnocidally anti-white?

One Federalist piece, "Critical Race Theory Is A Classic Communist Divide-And-Conquer Tactic," brings it back to communism. Quite how this adds up is unclear, but the author decries a way of thinking that exploits the amorphous "tragedy of racial divisions in America." In essence, some bad people with a communistic manual and mindset aren't interested in healing us.

Really? Did Communism, an equal-opportunity oppressor, revolve around the exclusive blackening of whites?

Western democracies are third way political and economic systems. They are already heavily socialized. Once Western societies go from third way to third world, debate over communism will cease, for Communism will have arrived.

In other words, dissecting and decrying Communism is an ideological luxury, the province of relatively wealthy, stable, developed democracies.

America is indeed racially divided. Blacks, for the most, hate whites for a variety of unjust reasons, not least the incessant, institutionalized, propagandizing by other progressive whites. Deal with this truth! Communism is but an intellectual crutch.

By deferring to communism and ducking anti-white animus, the ever-quaking commentariat cloaks itself in the raiment of respectable argument.

Then there is that Uriah Heep like obsequiousness. Going by the aforementioned Federalist writer, Beltway conservatives refuse to even take credit for the “oppressive” culture for which Europeans are being berated. Ludicrously, they universalize the creed, the Protestant Ethic.

Recall the "Smithsonian display on whiteness” that condemned as “white” all elements of a civilized society, including politeness, hard work, self-reliance, logic, planning, delayed gratification, and family cohesion?

"None of those are 'white' values,” says the author cited , as she criticizes Critical Race Theory for framing them as white.

Imagine being so apologetic as to wash your hands of a really cool thing you invented, evolved or were born into: Western Civilization.

Almost all these values are most pronounced in the European culture. One might even pin them down to Western Europe, because the sanctity of a man’s word, the handshake, culminating in the legally binding contract—these are some of the cultural and religious values that allowed capitalism to take off particularly well in the Anglosphere. Arguably, these are not part of the East European ethos.

By Rufo's definition, Critical Race Theory is "a radical ideology that advocates the overthrow of capitalism, meritocracy, and equal protection under the law." Sure. But those base objectives are secondary to singling out whites for a punishing program of reeducation, subjugation and intimidation.

Douglas Murray is, indubitably, one of the more articulate, neoconservatives. Across the pond, Murray finds himself wondering the streets of central London, only to be plunged into trammels of despair by “Black Lives Matter” imagery, projected over the city’s “vast screens.”

The “sinister rotation of images beaming out over London’s most famous junction” were “a horrible sight, not just for the threatening iconography, but for the profanity,” shudders Murray.

He describes the culturally atavistic attire and utterances to which we Americans have willingly habituated. Black Lives Matter imagery is, invariably, that of masked men, women and children all gesticulating and grunting in gangster grammar against “white people.”

For some reason, Murray’s Piccadilly Circus sojourn is conducive to a literary tangent, in which he shows himself to be lacking in the sourcing department. Bear with me.

Although Murray swanks, in a tangent, about correctly attributing a quotation, he errs and must be corrected.

“If not us, then who? If not now, then when?” is not originally by civil rights activist John Lewis. Rather, it is a distorted riff of an ancient adage by the Jewish sage and scholar, Rabbi Hillel (110 BC - 10 AD):

If I am not for myself, who will be for me?

If I am only for myself, what am I?

And if not now, then when?

Perhaps I, as a Jew, should call that “cultural expropriation” and plagiarism.

Back on terra firma, Murray effectively bemoans the culturally alien, hysterical apparitions that dog him across central London: There is “a black man wrapped in chains with a manacle around his neck and a gas mask covering most of his face.” There are “crowds of frightened people, shouting, screaming, yelling, and crying” about democracy denied.

Exported from America, Black Lives Matter “iconography” is too horrible to behold. In Murray’s context, it constitutes a cultural colonialization of London, that most English of cities.

Ineffectively, when he comes up for air, Murray fizzles, meekly blaming …  the media for pushing a “narrative of disunity and dissent.”

It will not do to merely accuse Critical Race Theory peddlers within and without the hive media and academia of preventing multicultural America (and England) from having that big group hug we all crave and know we are capable of.

Denied, the systemic war on whites will not end well.

Completely different. SA has a mostly unarmed White minority. Some of them have begun to gun-up, but they're still vastly outnumbered.

Whites are 65% of the population and already less than 50% in the under 20 year olds.

By 2100 Whites will be only 15% of the population and that’s if things stay the same.

Everyone wants to live in the whitest place they possibly can. Unfortunately, at between 10 and 11 percent of the world’s population (and rapidly falling), there’s just not enough white people to give everyone the life that they deserve.

South Africa and Rhodesia are templates for the violence against white people we are going to see. Normalizing that violence is already well underway by the people who own the mass media.

Really, lots of conservatives think that nothing will fundamentally change about America when whites are a minority. They have probably noticed how popular “liberty” and “muh limited government” are in Africa and South America. Acknowledging the obvious might get them called a bad name by people who hate them and want them dead. Even the lead up to that event of white minority/plurality status (that is less than 20 years ahead) is already causing the country to “fundamentally transform.” What do people think Obama meant by that? The template is California. Whites are minority there. How’s the GOP doing in CA?

South Africa has 59 million people. 10% white(Wikipedia). Can their departure be orderly or like that of South Viet Nam?

We wouldn’t even have to worry about losing the Senate or the Filibuster or the House, as the Republicans would have 66+ seat majority in the Senate and 300+ in the House.

All true. Heck, even with 2000 demographics, we wouldn’t be worried about much.

I’m not sure where they could go. Maybe Hungary or Russia would take them.

The divide is not about black/white...gay/straight...men/women...young/old...etc.

The precondition of a civilized society is the barring of physical force from social relationships—thus establishing the principle that if men wish to deal with one another, they may do so only by means of reason: by discussion, persuasion and voluntary, uncoerced agreement.

The necessary consequence of man’s right to life is his right to self-defense. In a civilized society, force may be used only in retaliation and only against those who initiate its use.

10. “Divide and govern” is a maxim consecrated by the experience of ages, and should be as familiar in its use to every politician...much, much more...

In order to form a more perfect union.

We wouldn’t even have to worry about losing the Senate or the Filibuster or the House, as the Republicans would have 66+ seat majority in the Senate and 300+ in the House.
//

yep. the left is good at boiling the frog. they’ve been working on where we are now for decades.

“A has a mostly unarmed White minority.”

I bet not in Pretoria 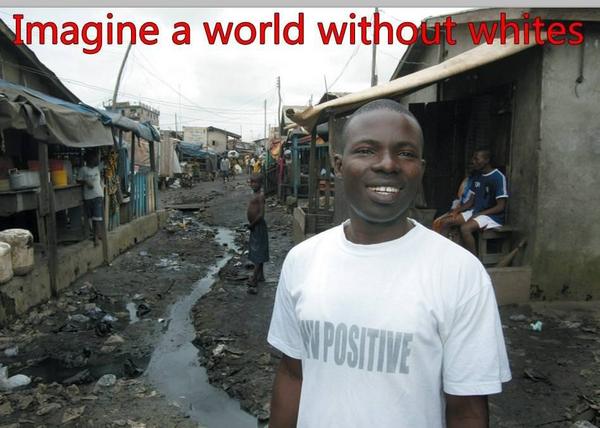 I say take in all South African families with 3+ kids. We’re gonna need them. The left will have a problem with importing whites.

Or parts of Europe given over to the Muslims ...

White Americans with European heritage are about 58% of the USA population.

When you add in illegal immigrants - who always get Amnesty - European white Americans are about 55% of the USA population.

In the 2020 election, one third of eligible voters are non-white.

They will vote 75% Democrat.

Re: “I say take in all South African families with 3+ kids.”

Unfortunately, a majority of white South Africans vote exactly like their ancestors in northern Europe - Socialist.

The GOP would be lucky to get 50% of the South African vote.

I’m not so sure. You lose everything to socialists you’ll learn quick. Ask the Cubans. Dunno about the younger generation.

They were explicitly modeled on the Socialist governments of northern Europe at that time.