“Moreover, this investigation has illustrated the extent to which officials within the Obama administration ignored the glaring warning signs when the vice president’s son joined the board of a company owned by a corrupt Ukrainian oligarch.” 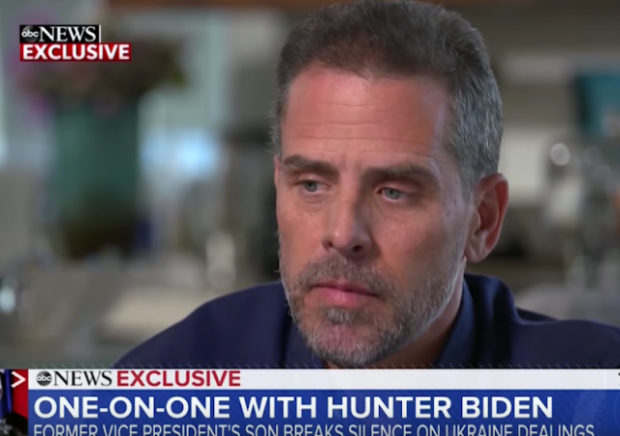 I remember many publications raising an eyebrow when Hunter joined the Burisma board, especially since President Barack Obama appointed his then-Vice President Joe Biden to oversee Ukraine’s transition from a presidency under a pro-Russian president to a pro-Western president:

On April 16, 2014, Vice President Biden met with his son’s business partner, Devon Archer, at the White House. Five days later, Vice President Biden visited Ukraine, and he soon after was described in the press as the “public face of the administration’s handling of Ukraine.” The day after his visit, on April 22, Archer joined the board of Burisma. Six days later, on April 28, British officials seized $23 million from the London bank accounts of Burisma’s owner, Mykola Zlochevsky. Fourteen days later, on May 12, Hunter Biden joined the board of Burisma, and over the course of the next several years, Hunter Biden and Devon Archer were paid millions of dollars from a corrupt Ukrainian oligarch for their participation on the board.

The 87-page report found that people in Obama’s administration knew that Hunter’s position was “problematic” and it interfered with the U.S. trying to execute “policy with respect to Ukraine.” But concerns went ignored:

Moreover, this investigation has illustrated the extent to which officials within the Obama administration ignored the glaring warning signs when the vice president’s son joined the board of a company owned by a corrupt Ukrainian oligarch. And, as will be discussed in later sections, Hunter Biden was not the only Biden who cashed in on Joe Biden’s vice presidency. Former Acting Deputy Chief of Mission at the U.S. Embassy in Kyic (sic) George Kent and State Department official Amos Hochstein raised concerns.

Also in 2015, former Acting Deputy Chief of Mission at the u.S. Embassy in Kyiv George Kent told Biden’s office that Hunter’s position on the board was an obvious conflict of interest. No one listened to him. Kent stressed in a 2016 email: “Furthermore, the presence of Hunter Biden on the Burisma board was very awkward for all U.S. officials an anticorruption agenda in Ukraine.”

Kent repeated these concerns when he testified last November:

“The pervasive and longstanding problem of corruption in Ukraine included exposure to a situation involving the energy company Burisma,” said Kent. “The primary concern of the U.S. government since 2014 was Burisma’s owner, Mykola Zlochevsky, whose frozen assets abroad we had attempted to recover on Ukraine’s behalf.”

Burisma was owned by Mykola Zlochevsky, an ally of the pro-Russian President Viktor Yanukovych. A 2012 Ukrainian investigation included allegations against him of money laundering, tax evasion, and corruption.

The Senate report found that Hunter “formed significant and consistent financial relationships” with Zlochevsky. It also found that Archer’s firms “made millions of dollars from that association:”

In addition to the over $4 million paid by Burisma for Hunter Biden’s and Archer’s board memberships, Hunter Biden, his family, and Archer received millions of dollars from foreign nationals with questionable backgrounds.

Hunter Biden received a $3.5 million wire transfer from Elena Baturina, the wife of the former mayor of Moscow.

Hunter Biden had business associations with Ye Jianming, Gongwen Dong, and other Chinese nationals linked to the Communist government and the People’s Liberation Army. Those associations resulted in millions of dollars in cash flow.

Hunter Biden paid nonresident women who were nationals of Russia or other Eastern European countries and who appear to be linked to an “Eastern European prostitution or human trafficking ring.”

Hunter was on the Burisma board “when Zlochevsky allegedly paid a $7 million bribe to officials serving under Ukraine’s prosecutor general, Vitaly Yarema, to ‘shut the case against Zlochevsky.'”

Kent and the Resident Legal advisor “reported this allegation to the FBI.”

The GOP knew that Obama was not a natural born citizen.

And Osama Obama also know that Hunter was making millions...illegally. But then he was convinced that he’s get a third term so it didn’t matter.

No, they wanted to run their own ineligibles.

I’ve never seen a Senate report worth the paper it was written on.

Often they are little more than a obstacle to criminal prosecution.

For making two or three hundred thousand dollars a month, Hunter appears to have the very :-(.

Then-VP Biden's son, Hunter Biden, a ne'er-do-well crackhead who couldnt hold a job, was treated like a high govt official. He conducted personal business with US tax dollars and received Secret Service protection on trips to multiple foreign locations. Hunter could not have done this without having high VERY HIGH protection.

The Senate report also stated that the investigation found that the Obama administration “knew that Hunter Biden’s position on Burisma’s board was problematic and did interfere in the efficient execution of policy with respect to Ukraine.”

All of the locales visited by Hunter should be checked together with US foreign aid appropriations to determine if Hunter (at Obama's direction) was shaking down recipients for a cut of the appropriation. //////// ITEM Hunter Biden had business associations with Ye Jianming, Gongwen Dong, and other Chinese nationals linked
to the Communist government and the People’s Liberation Army. Those associations resulted in millions of dollars in cash flow.

BACKSTORY Hunter Biden’s business partnership w/ a Chinese investment firm funded by the Chinese Communist government started acquiring companies beneficial to the Chinese military.....(NOTE: Crackhead Hunter could not have known which companies to buy UNLESS he had inside US govt ntl security info.)

They invested in China General Nuclear, which was later charged by our FBI for stealing US nuclear secrets.

They bought part of an American "duel use technology" company, meaning it produces technology that has civilian and military applications.....
That was bought for the benefit of the Chinese military.”

ITEM The entire Biden family was involved in undermining the safety and security of Americans while Joe Biden was Obama’s VP.

<><> this indicates that the Biden family had protection from a VERY HIGH SOURCE.........

BACKSTORY In December 2016, the FBI busted a China General nuclear engineer, Szuhsiung “Allen” Ho, for conspiring to help China illegally obtain “sensitive nuclear technology” from within the US.........

Barack Hussein Obama has a book fools can pre-order now.
No one will allow anything on TV against him while he is pushing that lucrative book.

Also, he must be jealous Michelle O is still selling books and coffee table puff piece books by the cartloads-—more than his doorstop book will sell.

“Don’t diss me Mr. O, or you know I can keep you in my sleeper hold headlock longer than you can stand. You know that. Last time I squeezed you so hard my forearm hairs left impressions on your neck that took a week to go away.”

Wonder what Vindman thought of this whole thing.

I wonder what Obama’s cut was.

“The GOP knew that Obama was not a natural born citizen.”

But there was always a liberal judge to toss the situation. Can’t prove it even though it was obvious.

“But they could not do anything about it without looking like racists...”

They coudn’t do anything about it at all. Th US has no corruption investigation treaty or extradite treaty with Russia. He brakes the law there, and it doesn’t effect commerce or political stance decisions here, We don’t have a horse in the race.