Steve Bannon joked about We Build The Wall founder Brian Kolfage stealing money from the fund and boasted about the triple amputee veteran's 'million-dollar yacht' in footage
Daily Mail ^ | 8/21/20 | Rachel Sharp For Dailymail.com and Jennifer Smith

Kolfage, a Purple Heart veteran who lost an arm and two legs in Iraq in 2004, was arrested at his home in Florida and is accused of being the main beneficiary of the scam, allegedly pocketing a staggering $350,000 of donor money while he and his wife flaunted their extravagant lifestyles on social media.

Newly resurfaced footage of the pair taken on June 24, 2019 shows the two men openly laughing and joking about peddling money from the border wall scheme, more than a year before the feds swooped in.

In the video, part of We Build The Wall's 'Wall-A-Thon' fundraiser to draw in donors to the scheme, Bannon boasts that they are on board Kolfage's 'million-dollar yacht' and laughs that the veteran 'took all that money' from the scheme.

'Welcome back and this is Stephen K. Bannon,' Bannon says to the camera, while sitting next to Kolfage.

'We're off the coast of Saint-Tropez in southern France, in the Mediterranean. We're on the million-dollar yacht of Brian Kolfage.'

The two men look at each other and laugh as Bannon pats Kolfage on the shoulder.

'Brian Kolfage - who took all that money from Build The Wall,' Bannon adds, while Kolfage continues to smile at his alleged co-conspirator.

Social media users were baffled at the footage, which, based on the allegations made against the two men this week, point to an inside joke about the scam that was very much under way at the time. 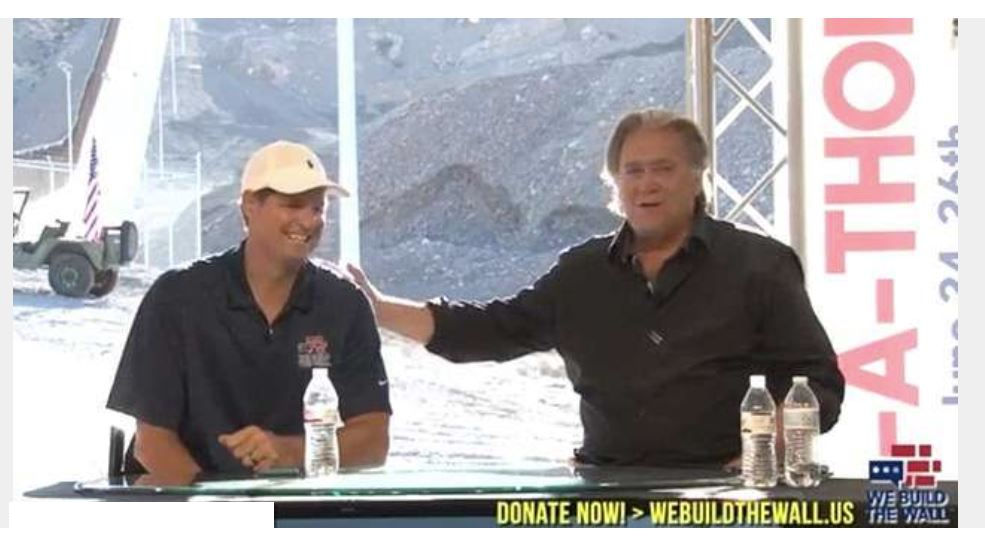 I gave them money. Disappointed with how they used it.

Bannon painted a target on his own back.

Bannon knew better. Especially since he’s under scrutiny since day one of Trump Administration.

I’ve never trusted or liked Bannon.. I wish Trump would never have crossed paths with that greasy SOB.

I’m out $600. However, 2 projects did get completed and one more ongoing and one in planning stage. If we can believe what is on their web pages...

Was he being sarcastic?

“If we can believe what is on their web pages...”

If you are close to Trump at all, and you leave the slightest gap in your armor, the Left and the massive government they control will find a way to stick a knife in.

Why must Trump associate with the “shady” types? They seem to gravitate toward him because he knows how to make money. He makes it honestly but these guys, well... I know he really seems to enjoy a walk on the wild side from time to time.

As soon as everyone realizes that EVERYONE in the Swamp or associated with it in any way is thoroughly and completely corrupt, the better off We The People will be.

I will not, however, hold my breath waiting for the American people to get a clue.

They don’t call him Sloppy for nothing.

Maybe it was just a stupid joke. Emphasis on stupid.

Too bad a purple heart guy will be remembered this way...Sometimes alllll that money is just too much temptation

I agree but it's worth pointing out that the morning after the "Hollywood Access" tape was released in October 2016, Bannon was one of the only - if not the only - close aide who told Trump to fight. Pretty much everybody else in the room was telling Trump that all was lost and that he should consider dropping out of the race. I also believe it was Bannon's idea to bring the Clinton sexual asssault accusers to the second debate the next day. A brilliant masterstroke.

But yeah, the guy is a bit of a sleazeball. He also cost us a senate seat in Alabama.

The Democrat Media and the corrupt SDNY prosecutors are at bat right now.

Steve Bannon is worth more than 20 million bucks, according to sources.

Remember - this dropped on a THURSDAY so the Dem Media could shriek about it all weekend long.

Ten weeks till the election.

Some Democrat judge out in Democratafornia dropped a pro-Spermy Daniels ruling today.

Gosh, what a coincidence...

Of course. That joking exchange is tantamount proof they didn’t steal anything. So we’re supposed to believe they stole money and then publicly joked about it. Come on.

They supposedly took what — 1M out of $25M. If they did that is 4% which is less suckage than most charities. Legal bills? who knows?

So I call BS on the only thing until I see more damning evidence. Innocent until proven guilty.