“Goya (food products) CEO Robert Unanue, whose great grandfather founded the company as a Spanish immigrant in 1936, praised President Trump last Thursday at a White House event, saying the U.S. is “truly blessed” to have a leader like him….The comments immediately sparked a backlash among Latino leaders, (italics mine) including former Housing Secretary Julián Castro and Rep. Alexandria Ocasio-Cortez   (D-N.Y.), who called for a boycott of the brand,” reports The Hill.

“Goya Foods is doing GREAT. The Radical Left smear machine backfired, people are buying like crazy!” (President Trump tweet, July 15).  Indeed, some have rebranded the boycott as a BUY-cott.

And wouldn’t you know it? Well before this “BUY-cott” of Goya products, your humble servant had launched his own Goya “BUY-cott” by touting the brand for his fish and game cookery on various cooking shows.

But enough about me.  Let’s look at some of the (backfired) boycott’s chief boosters, shall we.

“What (Goya CEO) Unanue doesn't seem to appreciate,” wrote boycott booster and former aspirant to the Democrat presidential candidacy Julian Castro on CNN, “is that his words have consequences. They give cover to Trump's bigotry and prop up a man who seems determined to make life harder for people of color in this country.”

In fact, Julian Castro issues this statement from some strong “activist’ stock. To wit: “(Julian Castro’s mother) Rosie Castro is a woman with many talents and strong ideals. She's a well-known, local civil rights activist and was a founding member of La Raza Unida,” writes Voices of San Antonio.

"Her vocal support for Angela Davis, then a member of the Communist Party USA, brought Rosie to the attention of the FBI.…. A new level of political activism started for Rosie Castro, manifested through her work with Partido Nacional de La Raza Unida, also known as La Raza Unida Party, which she joined when it formed in the early seventies,” reports Texas Monthly.

Don’t get me wrong. It’s not like the Southern Poverty Law Center (planet earth’s official arbiter, as we all know, on designating hate groups) lists the Chicano group La Raza as a “hate group.” Heaven forbid. No, for the SPLC, it’s outfits like the American Family that qualify as “hate groups.”

Instead, I came up with the designation for La Raza on my own, without the SPLC’s guidance, tutelage —or even their permission!  If you can imagine such insolence.  Let’s have a look at my reasons, and see if you agree:

First off, the very name of Rosie Castro’s hate group “La Raza” translates into English as “The Race.” Can you imagine the uproar from such as the SPLC and Democrats if a caucasian-led group named itself “The Race?”

“VIVA CHE GUEVARA!” “Happy Birthday to Comandante Che Guevara!” are just two of the many tributes and accolades for the hate-filled, mass-murdering terrorist found on La Raza Unida’s Facebook page.

“HATRED is the central element of our struggle!… HATRED that is intransigent….HATRED so violent that it propels a human being beyond his natural limitations, making him a violent and cold-blooded killing machine…We reject any peaceful approach. Violence is inevitable. To establish Socialism RIVERS OF BLOOD MUST FLOW!….The victory of Socialism is well worth millions of atomic victims!”

“The U.S. is the great enemy of mankind! Against those hyenas there is no option but extermination….If the missiles had remained in Cuba we would have fired them against the heart of the U.S. including New York City!”

“My nostrils dilate while savoring the acrid odor of gunpowder and blood!…Crazy with fury I will stain my rifle red while slaughtering any surrendered enemy that falls in my hands! With the deaths of my enemies I prepare my being for the sacred fight and join the triumphant proletariat with a bestial howl!”

Let’s strep back for a second and try to wrap our heads around this issue: Rosie Castro (Julian’s mother) helped found a group whose revered idol is a communist, mass-murdering terrorist, whose lifelong object of burning hatred was the U.S. Rosie Castro--according to a media fluff piece--“taught her son everything he knows about politics.” And this son served prominently on a U.S. president’s cabinet, presumed to lead the United States as president, and presumes to lecture Americans about bigotry.

All of this is glossed over by the same media that denounces President Trump because his father once found himself (unwittingly, according to all evidence) in the company of the KKK!

And speaking of Goya products: Next time you catch a fish, harvest a deer or wild hog (a process, by the way, during which masks aren’t mandated even by the most Karen-like authorities!) You might give some of these recipes a try. 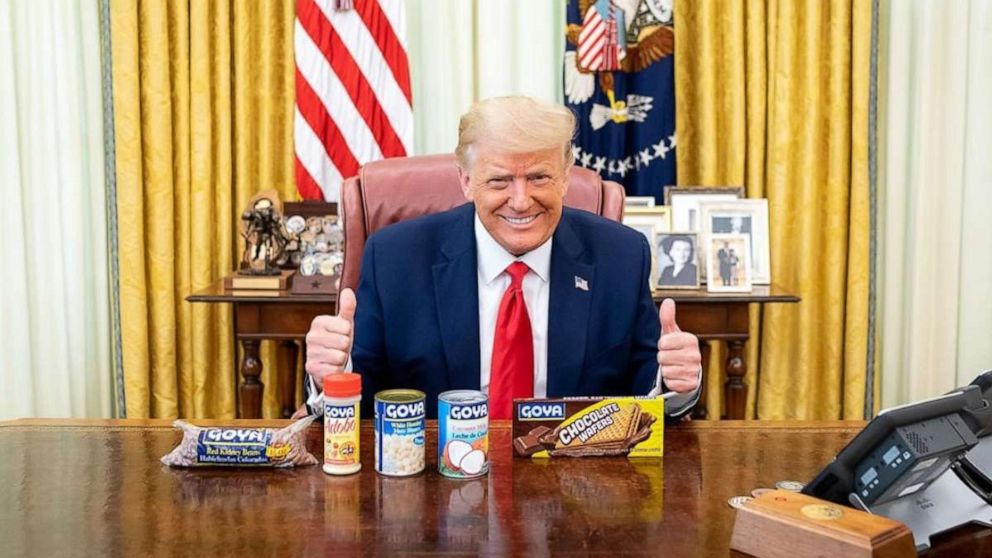 The management and employees of Goya Foods are laughing all the way to the bank!!! AOC & Julian Castro are the greatest marketing team that Goya foods ever had.

On deals like this where millions of non-Hispanic Americans flood to supermarkets to empty the Goya Foods shelves of their products, a good percentage remain as everyday Customers to Goya foods!!!

Thanks, Democrat, Butt Wipes, AOC & Julian Castro, your failed one day boycott of Goya Foods has gained Goya Foods ten of thousand of new everyday consumers of the Goya products!!!

Whoa! I’m a big fan of the black beans and chickpeas, but didn’t know about the chocolate wafers. That will be today’s purchase after chores and getting things set up for the no-mask shindig here this evening. They make a great bottom “crust” when you make an Ice Cream Pie for entertaining your summer guests.

“HATRED is the central element of our struggle!… HATRED that is intransigent….HATRED so violent that it propels a human being beyond his natural limitations, making him a violent and cold-blooded killing machine…We reject any peaceful approach. Violence is inevitable. To establish Socialism RIVERS OF BLOOD MUST FLOW!….The victory of Socialism is well worth millions of atomic victims!”

My sustainer wife seems to be pretty calm and makes no outward public display of her conservatism. However, she decided to buy Goya. She could allow that surreptitious protest.

As one who is a schooled of at the Santa Fe School of Cooking, she is no truly amatuer. What she learned is that Goya had products she really needed at prices less expensive than she had been buying. She was sort of excited about the Goya cilantro.

So, I’m pretty sure that she will become a permanent Goya customer

We bought some Goya products this week. I discovered that I really like the mango nectar and will be buying it again. We also ended up having a nice conversation with the cashier at the market, who somehow figured out that we were conservatives without our having said a word.

Sparked a backlash among Latino leaders.

The Latinos voters better learn a lesson you get what you vote for so check and double check records and never take their word for anything their record shows who they are.

I bought some Goya canned beans the other day. Couldn’t find their salsa. Didn’t know about the chocolate covered wafers.

Every store I have visited has been stocked out of Goya products. As soon as some are again available, I will try some of each.

All of the Goya products were displayed UPSIDE DOWN on the shelf.

No other canned product was so displayed.

Bought some Goya regardless!