Newly released documents about the investigation into former national security adviser Michael Flynn show additional “exculpatory evidence” linked to a Justice Department review of the case investigators built against him shortly after President Trump’s election, his lawyers argued in a court filing Friday.

“These documents establish that on January 25, 2017 – the day after the agents ambushed him at the White House – the agents and DOJ officials knew General Flynn’s statements were not material to any investigation, that he was ‘open and forthcoming’ with the agents, that he had no intent to deceive them, and that he believed he was fully truthful with them,” Flynn’s attorneys wrote. “In short, there was no crime for many reasons.”

Flynn’s lawyers said that top Justice Department officials and the special counsel’s office knew about the documents for three years before they were able to obtain them, following U.S. Attorney for the Eastern District of Missouri Jeffrey Jensen’s review of the case.

I think a dozen-odd indictments will occur, like you suggest...then the public movement will stop until after the election.

Personally, I’m taking a “wait and see” attitude about Barr and Durham — unlike a lot of posters on these threads who insist they’re merely engaging in a legal dog and pony show to lull us patriots into a false sense of security.

It’s easy to give in to defeatism — and it appears that many FReepers have done exactly that.

I tend to be a pessimist about life in general. But I always try to set my emotions aside and draw conclusions based on verifiable facts.

Above all things, we must recognize that Trump has access to a lot of information that regular folks in Hometown USA don’t have.

We’ve also learned that Trump has a pretty astute sense of timing.

Knowing what we know from past elections, it’s not exactly a leap of faith to think that Trump has an October Surprise planned for the RATs. Maybe several.

Sad to say, but most voters have short memories, and the middle of summer is too early for Trump to execute a “don’t fire until you see the whites of their eyes” tactic against the left.

Labor Day or later, then. God grant us patience and fortitude in these evil times.

They need to indict the “journalists” at the New York Times and Washington Post that were part of this.

Somebody needs to BLM Judge Sullivan. Since whatever BLM does is not worthy of prosecution ... Just saying

Said at 2:20 AM on a Friday night. A little liquid prediction? Let's hope, but, don't think so.

The one thing I can’t figure out is that Judge Sullivan doesn’t seem to want to address any of this recent exculpatory evidence that’s come out, or that the lead prosecutor Brandon Van Grack was forced off the case. It’s like all of this stuff is non-existent, and has nothing to do with the DOJ’s dismissal of the case.

Durham was quoted as saying this week that he does not want the timing of any charges to look politically motivated. Which tells me that he is a swamp rat too.

Correct!
And G. Maxwell has not killed herself yet!

“Sad to say, but most voters have short memories, and the middle of summer is too early for Trump to execute a “don’t fire until you see the whites of their eyes” tactic against the left.”

EXACTLY RIGHT!! Most especially regarding the timing of the info dump on the Left.

11 posted on 07/11/2020 2:41:16 AM PDT by billyboy15
[ Post Reply | Private Reply | To 4 | View Replies]
To: Newbomb Turk
I fear you are correct, both Barr and Durham seem to be signaling that there will be no indictments before the election. Reporter John Sullivan essentially confirms this view with the possible exception of minor indictments before Labor Day.

Why would a presumably honest and presumably conservative attorney general and his Specially Selected Trial Prosecutor hide the ball? After all, the guilt for many crimes beginning with Hillary Clinton's email server are both clear and notorious. Perhaps it all began with President Trump's public statement that Hillary should not be prosecuted. Perhaps it has to do with institutional resistance and turf guarding by the Department of Justice in the deep state. Perhaps it comes from an overblown sense of decency, a desire not to engage in the very conduct which taints the Obama Justice Department, producing a punctiliousness that makes Barr and Durham allergic to any wiff of political motive.

Whatever the motive, to make justice dependent on the reelection of President Trump, or any president for that matter, is to put lie to Attorney General Barr's pious was hosannas to the rule of law.

In trying perhaps too hard to reach a higher moral ground than the corrupt Obama administration, Barr has perhaps unwittingly slipped into politicizing his own department even as he would rise above the sordid history of Obama's Department of Justice. The need now is to correct the politicization of the Department of Justice, the FBI and other branches of government. To condone the rank criminality of the Obama administration merely by delaying is to gravely undermine the rule of law for this season and for generations. "Justice delayed is justice denied" is a two-way street.

If President Trump is not reelected, justice will be denied and the rule of law dies.

Since the crime was politically motivated justice demands the punishment should hurt the bad guys politically. Whatever happened to the idea that crime should not pay ?

And this information simply means the fbi itself is the enemy of the people. If the fbi and its lackey agents who willingly framed LTG Flynn are able to get away with it, then you or I are next and the fbi is just the modern day Stasi.

Just don't bet any money on it. 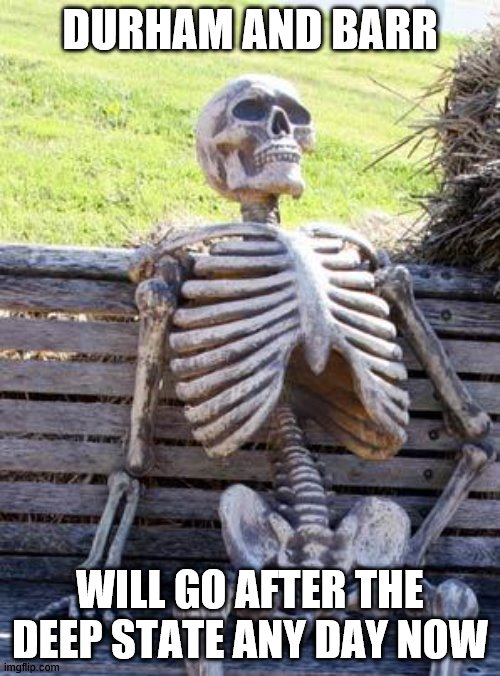 I’ve said this numerous times: the entire DOJ is rotten. It needs to be replaced with proven Red State prosecutors, and former State AGs. Clean house top to bottom. Nobody promoted from within the DOJ is trustworthy.

I’m really tired of this “we’re better than that” crap.

The only shocking thing about the Flynn case would be people being held accountable; however, that’s not likely to happen.

Try Judge Emmet Sullivan for sedition and treason,
and the coverup of murder. Then he should
pay the price ..... or America will DIE.

the FIB is not the Enemy of the people, just Americans.

the FIB should shuttered, the buildings burned,
and the ground salted.