With a career that spanned both generations and genres, Charlie Daniels will be remembered for his musical genius and his freedom-loving heart.

>Charlie Daniels, singer, songwriter, country music legend, and pioneer of Southern rock, died Monday at the age of 83. Musically, Daniels was best known for his song, “The Devil Went Down to Georgia,” but beyond his legendary musical talent, he was an outspoken patriot, veterans advocate, and man of faith. Doctors said Daniels died of a hemorrhagic stroke in Hermitage, Tenn. Monday morning.

Born and raised in rural North Carolina before moving to Nashville, Daniels started his career as a recording session musician, causing Daniels’ music to span genres and generations of artists. He played on albums with Bob Dylan, Leonard Cohen, Ringo Starr, and even had one of his songs recorded by Elvis Presley despite never having even met The King. His musical genius and ability to channel various styles including jazz fusion, funk, gospel, and blues inevitably led to pioneering the blend of country and rock also known as Southern rock.

He would later be inducted into the Country Music Hall of Fame in the same class as Randy Travis, and perform as a member of The Grand Ole Opry with artists like Montgomery Gentry and Trace Adkins. “My Bible tells me God gives us the desires of our hearts, and tonight the promise has come true,” Daniels said the night he was inducted in the Opry in 2008.

In 1972 he formed the Charlie Daniels Band, and the group scored its first hit with the top ten song “Uneasy Rider” which tells the story of a long-haired hippie finding himself in a Mississippi bar. Their other popular hits include “Long Haired Country Boy,” “The South’s Gonna Do It Again,” “In America,” “The Legend of Wooley Swamp.” In 1979, “The Devil Went Down to Georgia,” won a Grammy for Best Country Vocal Performance by a duo or group and single of the year at the Country Music Association Awards.

In an entertainment industry that shuns and rejects conservative voices, Daniels was an ardent supporter of the First Amendment, the Second Amendment, law enforcement, military, the death penalty, the Bible, and just about any other conservative-leaning value that would get an artist cancelled these days. He happily shared his political beliefs with audiences with phrases like “the only good terrorist is a dead terrorist.” He spoke out against the crime of pedophilia, saying he believed, “The lowest form of animal life on earth is a child molester.”

Another Daniels mantra was that, “The only two things protecting America is the grace of God and the United States military.” Daniels repeatedly traveled across the world to play for U.S. troops in Iraq, Afghanistan, Bosnia, Kosovo, Korea, Kuwait and Guantanamo Bay.

With his manager, David Corlew, Daniels co-founded The Journey Home Project, a non-profit organization dedicated to supporting and improving the lives of American veterans. The Journey Home Project has raised more than $1 million to give to veterans, veteran programs, and charities, with $50,000 going to Vanderbilt University Medical Center for research on a unique kind of cancer that targets veterans and affects all their organs. For the last four years, nearly every day, Daniels would tweet the message, “22 VETERANS COMMIT SUICIDE EVERY DAY!”

Here are some of Daniels’ most memorable appearances and performances

RIP to one of the good ones. He blessed us with some good music.

Daniels was a studio musician on Bob Dylan’s Nashville Skyline, and also Self-Potrait, and New Morning. Dylan was a big fan of Charlie.

The energy and fun in the album is very identifiable. Johnny Cash and Dylan did a lot of fun jamming in connection with Nashville Skyline.

He went the way I would like to go ...quickly.

“Johnny, rosin up your bow and play your fiddle hard
‘Cause Hell’s broke loose in Georgia and the Devil deals the cards
And if you win you get this shiny fiddle made of gold
But if you lose the devil gets your soul”

When you see an entire article about Charlie Daniels and not one mention of “Still In Saigon” you know that the Vietnam Vet is still be ignored. Especially those who truly had PTSD.

...The ground at home was covered with snow. And I was covered in sweat.
My younger brother calls me a killer and My daddy calls me a vet.
Everybody says that I’m someone else That I’m sick and there’s no cure.
Damned if I know who I am. There was only one place I was sure
When I was
Still in Saigon
Still in Saigon.
I am still in Saigon in my mind!
Every summer when it rains, I smell the jungle, I hear the planes.
I can’t tell no one I feel ashamed. Afraid someday I’ll go insane.
That’s been ten long years ago and time has gone on by.
But now and then I catch myself
Eyes searchin’ through the sky.
All the sounds of long ago will be forever in my head.
Mingled with the wounded’s cries and the silence of the dead...

When I was a DJ at album rock KLOL in Houston in the early 1970’s, Charlie Daniels used to stop by a couple of times a year when he was in town for a concert & be the DJ for an hour or so. We would kick back & smoke his then trademark Anthony & Cleopatra cigars, shoot the breeze & just have fun.
I’ll never forget him.

Charlie Daniels will be sorely missed by Many! 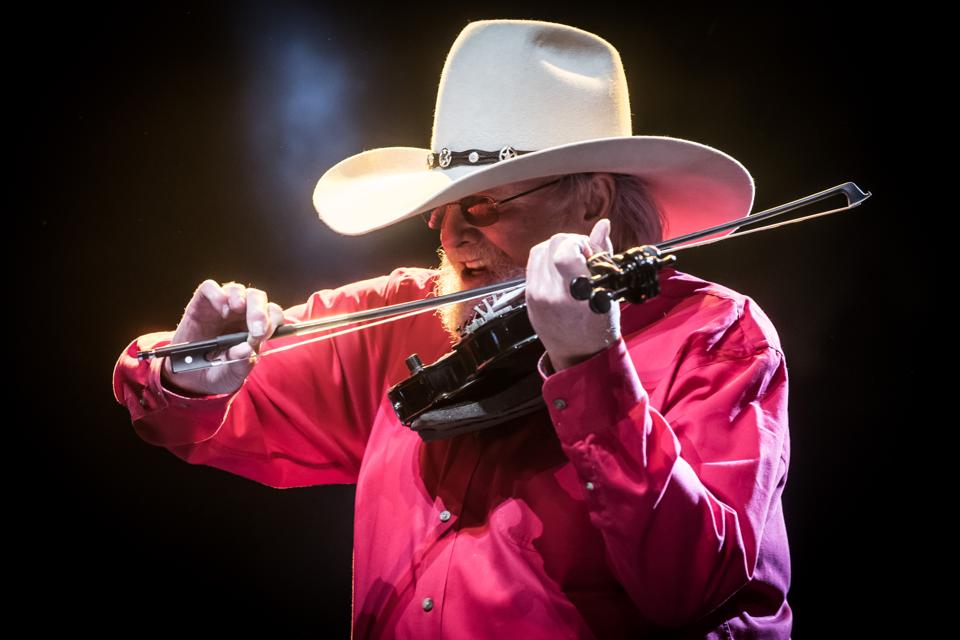 RIP brother, I look forward to meeting you on the other side so I can tell you in person how much your music has meant to me here...

First saw Charlie in 79 or 80 at Chicago fest at navy pier. We were mostly heavy metal fans but always had a soft spot for the CDB. probably saw him 20 times after that as he played at lot of festivals around the Chicago burbs

"To an inheritance that is imperishable, undefiled, and unfading, kept in heaven for you," Peter 1:4

Thanks for the many memories CDB

RIP Charlie, partied down to his music when younger

what a tremendous loss....

he was an outspoken and great patriot....think of these pretty boy "country stars" today who are so anti American and anti country people...

I remember when I was in school in Utica NY back in the early 70's he was coming to town....they interviewed him and I thought he was sooo old even back then.....lol....couldn't afford to see him then but did catch his act a few yrs ago at a casino...

Saw Charlie and the CDB in Atlanta in the 70s. He had been an “old soul” all his life. May God bless him richly for his vast heart of love for our country and his musical heritage, and his generous sharing of his gifts and abiding wisdom.