In recent days, the media has taken to sounding the alarm bells over a “second wave” of coronavirus infections. Such panic is overblown. Thanks to the leadership of President Trump and the courage and compassion of the American people, our public health system is far stronger than it was four months ago, and we are winning the fight against the invisible enemy.

While talk of an increase in cases dominates cable news coverage, more than half of states are actually seeing cases decline or remain stable. Every state, territory and major metropolitan area, with the exception of three, have positive test rates under 10%. And in the six states that have reached more than 1,000 new cases a day, increased testing has allowed public health officials to identify most of the outbreaks in particular settings—prisons, nursing homes and meatpacking facilities—and contain them.

Lost in the coverage is the fact that today less than 6% of Americans tested each week are found to have the virus. Cases have stabilized over the past two weeks, with the daily average case rate across the U.S. dropping to 20,000—down from 30,000 in April and 25,000 in May. And in the past five days, deaths are down to fewer than 750 a day, a dramatic decline from 2,500 a day a few weeks ago—and a far cry from the 5,000 a day that some were predicting.

The truth is that we’ve made great progress over the past four months, and it’s a testament to the leadership of President Trump. When the president asked me to chair the White House Coronavirus Task Force at the end of February, he directed us to pursue not only a whole-of-government approach but a whole-of-America approach. The president brought together major commercial labs to expand our testing capacity, manufacturers to produce much-needed medical equipment, and major pharmaceutical companies to begin research on new medicines and vaccines. He rallied the American people to embrace social-distancing guidelines. And the progress we’ve made is remarkable.

We’ve expanded testing across the board. At the end of February, between Centers for Disease Control and Prevention labs and state public health facilities, the U.S. had performed only about 8,000 coronavirus tests. As of this week, we are performing roughly 500,000 tests a day, and more than 23 million tests have been performed in total.

We’ve also vastly expanded our supplies of crucial medical equipment. In March, there were genuine fears that hospitals in our hot spots would run out of personal protective equipment like N95 masks, gloves or, even worse, ventilators for patients battling respiratory failure. The Strategic National Stockpile hadn’t been refilled since the H1N1 influenza outbreak in 2009, and it had only 10,000 ventilators on hand.

Since then, we’ve increased the supply of personal protective equipment by the billions. Our administration launched Project Air Bridge—a partnership between the federal government and private companies—that, as of June 12, had conducted more than 200 flights from overseas to deliver more than 143 million N95 masks, 598 million surgical and procedural masks, 20 million eye and face shields, 265 million gowns and coveralls, and 14 billion gloves. In addition, we’ve worked with the private sector to ramp up ventilator production. Today, we have more than 30,000 ventilators in the Strategic National Stockpile, and we’re well on our way to building 100,000 ventilators in 100 days. No American who required a ventilator was ever denied one.

We’ve also made great progress on developing therapeutics and a vaccine. Last month, the pharmaceutical company Gilead Sciences announced it would donate about 940,000 vials of its new drug remdesivir to treat more than 120,000 patients in the U.S. Under Operation Warp Speed, the federal government is already funding research into multiple vaccine candidates, and we are well on our way to having a viable vaccine by the fall.

But our greatest strength is the resilience of the American people. From the outset of this pandemic, the American people have stepped up and made great personal sacrifices to protect the health and safety of our nation. And it’s because of their embrace of social-distancing guidelines that all 50 states have begun to reopen in a safe and responsible manner.

The media has tried to scare the American people every step of the way, and these grim predictions of a second wave are no different. The truth is, whatever the media says, our whole-of-America approach has been a success. We’ve slowed the spread, we’ve cared for the most vulnerable, we’ve saved lives, and we’ve created a solid foundation for whatever challenges we may face in the future. That’s a cause for celebration, not the media’s fear mongering.

Mr. Pence is vice president of the United States.

Thank you for posting!

True, but there is a POTUS rally coming up...a BIG ONE!
The communists thought they had killed the rallies with their hyped-up BS virus. FAIL!!!
The communists are now grasping at anything and everything they can possibly use to to stop it.
They can take their taxpayer “virus” and shove it up their commie arses.....sideways.

Mike Pence is a good man.

I agree with Artcore — thank you for posting!

Of course there isn’t a second wave. However now that the White House posted this, the MSM will go into overdrive to convince people there is. What’s sad is many, including people here will fall for it.

As more people are tested, it’s obvious more cases show up. The media continually uses this simple fact to panic low-info people into believing a “second wave” of the virus is spreading.

It’s when/if the ICU beds start to fill up. Cases = Tests. More tests, more cases. But if they are not serious—most are not—then the concern level should remain low.

The problem is the media (and folks here too) do not have brains that can comprehend degrees of anything. Those minds are either all in, or all out. Unfortunately, the world doesn’t work that way.

VP Pence a much needed calm voice of reason.

This tells me the White House has moved on and Tony Fauci has been permanently benched.

The truth is so pretty.

In our county today they just logged our 175th. Wuhan Flu death.

Did I mention that our county’s population is 1.22 million?
And that nearly 2/3 of those victims were in nursing homes?

Thank you for posting! Spread it far and wide. :-)

The media cried wolf too many times.

The first wave has to end before you can have a second wave.

The first wave hasn’t ended anywhere and China’s numbers are irrelevant as they can’t be trusted.

“...This tells me the White House has moved on and Tony Fauci has been permanently benched.....”

Hope so. The little commie, PIAPS-loving POS needs to be permanently “benched” in a cell at GITMO as a domestic terrorist for what he has wrought on the U. S. economy. 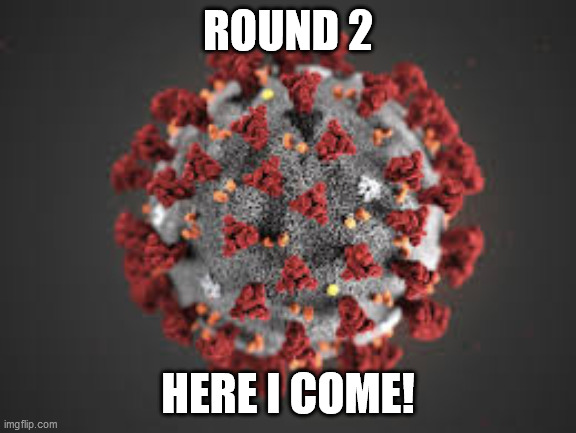 Not a bad letter but in my dreams he also would have slipped in something about the numbers being dramatically overstated.

Mr. Vice President, take some advice from William Shakespeare, ‘Brevity is the soul of wit’.