Tomie DePaola’s children’s stories have sold more than 25 million copies and been translated into more than 20 languages. We said goodbye to him this week, but his legacy lives on.

In a town in Calabria, a long time ago, there lived an old lady named Strega Nona, which meant “grandma witch.”

If you were born after 1975 in the United States, you are probably familiar with these words, which come from the children’s book “Strega Nona,” first published that year. It won a Caldecott Honor the very next year, and was named one of the “Top 100 Picture Books” of all time in a 2012 poll by School Library Journal.

Its author, the prolific Thomas Anthony “Tomie” DePaola, died on March 30 at the age of 85, following a fall at his barn in New Hampshire.

DePaola certainly had a unique, immediately recognizable style. He rarely deviated from it in the more than 260 children’s books he published over the course of his prolific literary and artistic career. One need only see the warm, friendly faces of his characters, the symmetry and patterns of his designs, or the soft, quiet colors of his art to identify one of his stories, which have sold more than 25 million copies and been translated into more than 20 languages.

His corpus was indelibly marked by his Catholic faith and upbringing in Connecticut, where he was born in 1934 to parents of Irish and Italian heritage. His picture books include “The Parables of Jesus,” “The Miracles of Jesus,” and his “Book of Bible Stories,” which set his artwork to various passages and stories from scripture, some of which are taken from the Protestant-friendly New International Version (NIV) translation. Others were more explicitly Catholic, including books on St. Francis of Assisi, St. Patrick, St. Benedict and St. Scholastica, St. Christopher, and Our Lady of Guadalupe.

DePaola was obviously proud of his Irish and Italian ancestry and culture, writing many stories set in his families’ native lands. These include, of course, the Strega Nona series, but also a number of tales from Irish folklore (e.g. “Jamie O’Rourke And The Big Potato,” “Fin M’Coul: The Giant of Knockmany Hill”).

This appreciation is also found in autobiographical stories about his Great Depression and World War II-era upbringing. In “Tom,” we learn of DePaola’s deep love and respect for his Irish-American grandfather, a butcher, story-teller, and prankster who instructs the boy Tomie to plant a chicken head in his backyard to grow a “chicken bush.” It’s one of the rare books I’ve read to my children that made me laugh out loud.

DePaola was also interested in sharing the religious and cultural heritage of other cultures with deep histories in America, such as American Indians and Latinos. One book that enchanted me as a child was “The Legend of the Bluebonnet: An Old Tale of Texas,” a Comanche story about a little orphaned girl who sacrifices her only doll — lovingly made by her deceased mother —to stop a famine ravaging her people.

The Christological allusions became obvious when I re-read the story to my children, climaxing in the girl’s prayer to the “Great Spirits”: “here is my warrior doll…. It is my most valued possession. Please accept it.” Appreciation for Latino Catholic culture, in turn, is evidenced in such works as “Night of Las Posadas,” “Legend of the Poinsettia,” and a beautiful Mexican rendition of the Cinderella story, “Adelita.”

Many of DePaola’s stories also acknowledge the rich treasures found in the American “good life.” His autobiographical stories (e.g., “Tom,” “The Lesson,” “The Baby Sister”), remind the reader of an earlier time in America, where members of our nation’s communities were more deeply bound to one another because of extended family and sub-culture networks.

They portray towns with Main Streets marked by locally owned, family-run businesses and shared civic institutions that buttressed and safeguarded community life. And they depict nuclear families of mothers and fathers who are lovingly faithful to one another and dutifully available to their children.

“The Quilt” is the story of a bed covering stitched by candlelight by a pioneer mother for her daughter, Abigail. It immediately becomes Abigail’s most cherished possession. Eventually the family packs up their belongings in a Conestoga wagon and heads west, where they build a new home. The quilt comes along for the journey, but is eventually stored in the attic.

Many years later another young girl, Abigail’s descendant, finds the quilt. Another mother once more restores it. Although I’m not sure DePaola meant it as such, the story is a profound reflection on our bonds to the past, and the need to honor and preserve our familial and national history.

From a Child’s Perspective

Of course, DePaola’s books would not be beloved by children if they were not relatable. Indeed, Tomie was uniquely skilled at seeing the world from a child’s perspective, presumably because he was able to remember and imagine his own childhood experiences so vividly.

His style of artwork, in its simplicity and welcoming manner, has also appealed to generations of children. Undoubtedly dePaola was a skilled artist, although one wouldn’t necessarily know it from picking up one of his children’s books. Counterintuitively, perhaps his expertise is exemplified in his ability to create art that is accessible, appealing, and memorable to young children.

My three children all love reading DePaola’s books, many of which we own. There are many, far, far, many more, that we do not (thank God for libraries!). This means that there will always be some new part of that Nutmegger’s imagination worth exploring.

What a wonderful legacy. He is greatly missed already. May he rest in peace and his family be comforted.

“Strega Nona” was the Italian version of “The Sorcerer’s Apprentice”. Took me years to actually notice that.

Excellent children’s books. I think we have every book he wrote.

May he rest in peace. Nana Upstairs, Nana Downstairs was my son’s favorite book. I read it to him to prepare him for my father’s passing. My son is 37 now and still recalls how my husband and I read it to him when he was a little boy.

I’m so sorry to hear this. I don’t think he ever finished the series about his experiences as a boy during World War II!

If my library ever opens again, I’ll have to find out.

Our CA public elementary school actually had some of Depaola’s more Catholic books and I read them to my kids’ classes, as “ library mom”. (I also read tales from other religions and cultures. You should have seen the little girls smile when I unexpectedly selected one of “their” people’s books.). I deeply appreciate his dedication to heritage story-telling.

I first learned about him in my children’s literature class at UNO; I took that class as a prerequisite for library school.

What was really cool when he came to our school and was a guest speaker to my class.

I could kick myself for not getting his autograph. 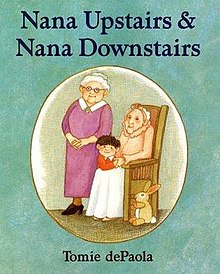 I read that to my children. My mother had an ancient relative “upstairs” when she was a young girl in Philadelphia.