A month before the 2016 presidential election, the FBI met Christopher Steele in Rome and apparently unlawfully shared with the foreign opposition researcher some of the bureau’s most closely held secrets, according to unpublicized disclosures in the recent Justice Department Inspector General report on abuses of federal surveillance powers.

What’s more, Steele, the former British spy who compiled the “dossier” of conspiracy theories for the Hillary Clinton campaign, was promised $15,000 to attend the briefing by FBI agents eager to maintain his cooperation in their Trump-Russia collusion investigation codenamed Crossfire Hurricane.

That investigation was so closely guarded that only a handful of top officials and agents at the FBI were allowed to know about it.

The report by Inspector General Michael Horowitz details how a team of FBI agents in early October 2016 shared with Steele extensive classified materials, just weeks before the bureau cut off ties with him for leaking his own research to the media. The secrets included foreign intelligence information still considered so sensitive that the IG’s report refers to it even now only as coming from a “Friendly Foreign Government.” In fact, this is a reference to Australia. That country’s ambassador to Britain sent the United States a tip about loose talk by junior Trump campaign adviser George Papadopoulos. The FBI has described that as the predicate for its Trump-Russia investigation.

TOPICS: News/Current Events
KEYWORDS: 201610; christophersteele; crossfirehurricane; fbi; fusiongps; gaeta; glennsimpson; michaelgaeta; spygate; steele Navigation: use the links below to view more comments.
first 1-20, 21-23 next last
Slowly but surely, Crossfire Hurricane is going to be the WORST ever scandal in the whole American history, and the connection to Obama himself (hopefully) will become clear (clearer). Be sure to read the whole article. Sundance at CTH is another 'stubborn' bulldog who has been tirelessly digging through DoJ/FBI/CIA/NSC (collectively, Deep State) layers of misinformation and obfuscation.

Out of the 476 pages of the recently released DOJ IG report, I am sure glad some real investigators have the doggedness to dig through the "unpublicized disclosures" and footnotes and such.

As for Barr doing his job, like someone else said, I want to see justice done in my lifetime, and none of the perpetrators died of old-age on $$$$ gubmint pensions.

You know what would stop Trump tweeting about the DOJ? Throw someone in fucking prison already. We can see you Deep State assholes.— The OG Hillbilly (@LauraLMonroe33) February 14, 2020

Sometimes it takes expletives to make the point. We are looking at nothing short of treason here and the frustration of seeing these scumbags free as birds on our televisions every day just makes you want to go crazy.

Just saw a tweet that mccabe wo t be prosecuted. 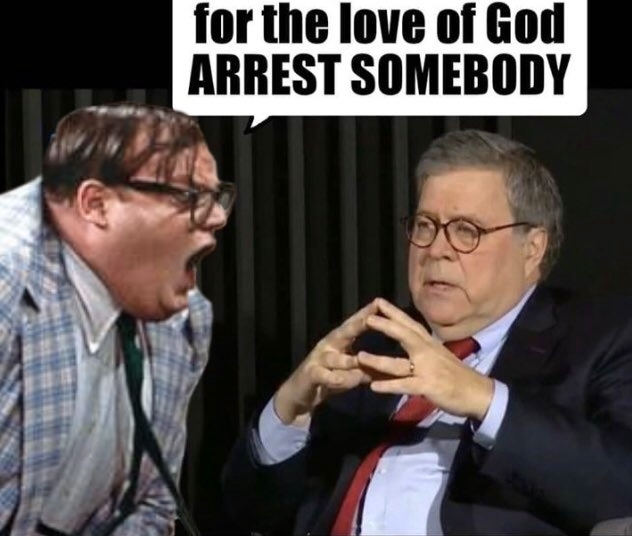 Deepfat Barr has failed us. He's more concerned about "tweets" than actually doing his job. no oversight, no timelines, no accountability. Even Mark Stein is complaining about Barrr and he's as normie as you can get

US President Donald Trump has announced he wants Australia’s role in sparking the FBI probe into links between Russia and his election campaign examined by US Attorney-General William Barr.

Despite Australia’s historically strong alliance with the United States, President Trump specifically named Australia as a nation whose part in what he calls the “Russia hoax” must be thoroughly investigated.

“What I’ve done is I’ve declassified everything,” Mr Trump told AAP reporters at the White House on Friday before departing on a trip to Japan.

“I hope he looks at everything, because there was a hoax that was perpetrated on our country.”

In addition to President Trump’s allegations, his former campaign aide George Papadopoulos is also pointing the finger at Australia. Mr Papadopoulos has claimed Australia’s former high commissioner to the UK, Alexander Downer, set up a meeting at a bar in London in 2016 to purely to spy on him. “I believe Australian and UK intelligence were involved in an active operation to target Trump and his associates,” Papadopoulos said.

There has been no love lost between the two men, with Papadopolous referring to Downer as, “The Devil From Down Under” in his book Deep State Target.

In another unsubstantiated claim, Papadopoulos insists Mr Downer recorded their conversation with a phone during the brief meeting at the Kensington Wine Rooms. “The phone comes out again,” Papadopoulos writes in the book. “He must have grabbed it and held it up at least four times. “He is so aggressive, so hostile, it’s actually a bit intimidating.”

Mr Downer has always rejected the claims, along with the Department of Foreign Affairs and Trade. “The Australian government categorically rejects any allegation that it sought somehow to interfere in the US presidential election,” said a DFAT spokesperson.

However, Mr Downer did confirm that during the meeting, Mr Papadopoulos revealed Russia had damaging material on Mr Trump’s presidential rival Hillary Clinton. In a back and forth between the pair, Papadopoulos denies telling Mr Downer about the Russian information, but he does not deny the knowledge. “I never told Downer anything about hacked emails,” Papadopoulos said. “I’m confident I never said that.”

The information was forwarded to Canberra and then passed on to US intelligence services and the FBI. US Special Counsel Bob Mueller, in his report on the links between the Trump campaign and Russia, stated the Papadopoulos-Downer meeting was what prompted the FBI to open its probe on July 31, 2016.

President Trump’s announcement made waves on social media, with users tweeting up a storm about the potential impact on Australia’s ties with the US.

Five Eyes is the intelligence sharing alliance between the US, Australia, UK, Canada and New Zealand.

From who? It won’t surprise me.

The fbi losers are TRAITORS! Arrest them. Hang them after a fair, speedy trial and conviction, of course).

Thanks for that, I just caught on the news 'won't be prosecuted' and I'm scrambling around who? who won't be prosecuted?? Bummer but somehow I was afraid it might be Brennan for some reason. I want him to go down! :(

Of course McCabe won’t be prosecuted. He’s on their side.
Only our side gets prosecuted.

Now it’s all clear to me.

9 posted on 02/14/2020 9:35:45 AM PST by Signalman
[ Post Reply | Private Reply | To 8 | View Replies]
To: All
Dems Colluded with foreign countries to generate propaganda to affect a Presidential Election.
They forced a bogus investigation, and in typical Dem fashion, they accused Trump of doing what they did......

.......there are dozens of memos that make up an actual diary of moment-by-moment events, during the FBI
investigation of Donald Trump (as candidate and as president), documented by Obama's FBI Director Comey......

During her ill-fated campaign Hillary bragged about “foreign governments” supporting her election.

That would mean Obama, Comey and Hillary were colluding with
foreign governments to meddle in our elections, wouldnt it?

is the plan in justice, to just stall till people get tired of expecting any justice when 9/10 of those who could do something about corruption.. are the corruptors..

stall till we dont care and give up?.. we should storm the gates.. but we are yet too comfortable to object.

Don’t hold your breath for Barr. My opinion at this point is that NOBODY who might go after the Deep State will ever pass Senate confirmation.

It is becoming clear that many of us were right at the outset.

Brennan played the FBI like a fiddle with a coordinated disinformation campaign to make it look like there was a massive plot by Russia to control Trump.

The FBI brass running this thing never questioned or vetted the information because it fit their preconceived political bias. They thought they were James Bond’s saving the Western world when they were really just stupid puppets in a play someone wrote. They were an easy mark for the CIA along with the State Department, the media, and many Senators. They never questioned how convenient it all seemed or considered that they were being fed a narrative.

Disinformation campaign 101 - freshman level stuff and they fell for it hook, line, and sinker. You can imagine how self-important they must have all felt at the time as Brennan moved them around the chessboard.

While I am angry and bitter about it, you almost have to pity them for how pathetic they look now. The surprise expressed by some of them that we have seen was not fake. They got played.

I truly hope this entire story is told one day, but I know that is wishful thinking. There would be many lessons in this for the nation.

They don’t even need to stall until we stop caring, they just need to stall until the federal statute of limitations runs out, which it already has for quite a few notable criminal matters that could have been prosecuted, like Hillary’s illegal email server shenanigans.

That would mean Obama, Comey and Hillary were colluding with
foreign governments to meddle in our elections, wouldnt it?

Ooooohhh, Death. Spare me over for another 4 years!

Buried in the Department of Justice is an attorney general unable or unwilling to mete out justice to anyone involved in trying to keep Trump from being elected or who were part of the russian collusion plot to oust a dully elected President Trump!

treason or not...........we both know nothing will happen to these scum bags...........No charges against McCabe proves it....mean while conservatives will be left to rot in jail